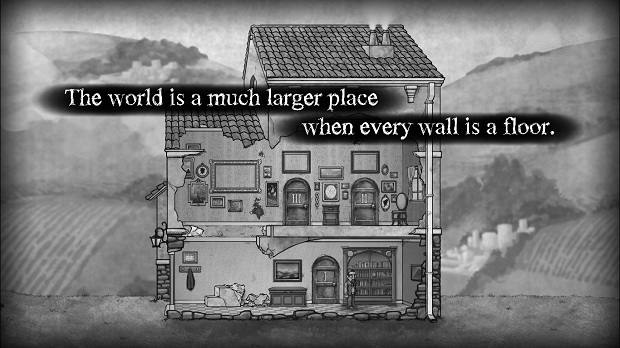 If you’ve played the popular side-scrolling indie puzzler Braid, you might find The Bridge to be a tad too familiar. The art is of a hand-crafted style. The scale of the environment to the main character is largely the same. The chapters are accessed through doors in an “overworld” house. The narrative is rather esoteric, “deep thinking” stuff. There’s even a rewind mechanic. The many parallels certainly dominated my first impression of this title.

But to write The Bridge off as simply a copycat would be dishonest. This title’s puzzles are gravity-based with a unique, pencil-sketch style inspired by Escher drawings that challenge the player to examine the situation from multiple perspectives. I can safely say that this core hook is unlike anything I have played before.

The goal of each puzzle in The Bridge is to bring the player character from the starting position to the exit door. Doing so not only entails navigating the mind-bending drawing, but may include avoiding killer boulders (with supremely creepy faces, I might add) and obtaining keys necessary to unlock the door. There’s a narrative in there — somewhere — explaining who this character is and what thoughts he’s exploring, but it’s told in such obscure fashion that it makes Braid look transparent. It didn’t add anything to the experience, but it didn’t detract from it, either.

Character movement is restricted to walking left and right. Any other movement is based on adjusting the room’s center of gravity by rotating it, causing the main character and other objects to move about in response. For the first several levels, this mechanic feels markedly novel, demanding a “take your head off and sit it next to you” approach that so many puzzle games chase but rarely achieve. It’s the sort of situation that will elicit a dumbfounded “of course!” response once you discover the seemingly obvious solution to a puzzle that befuddled you moments before.

After an initial adjustment, you’re likely to cruise through the majority of the puzzles without too much deliberation. There are tricky moments peppered throughout, but once you catch on to how the game wants you to play it, it gets significantly easier. That is, until the later puzzles arrive that introduce multiple centers of gravity.

At first, The Bridge does a good job at gradually introducing new puzzle mechanics, easing them into the experience. But the puzzles that make up the final third of the game require managing your character in one center of gravity while other objects exist in a different one. Rotating the room becomes instantly more disorienting — where each center of gravity resides is not always obvious. It’s a difficulty spike that feels like slamming into a brick wall. And instead of the feeling of elation that you hope for from a difficult puzzler, advancing beyond one of these just made me feel relieved that it was over. It seemed as if there were a couple of puzzles at the end that I faked my way through to completion, rather than ultimately understanding them.

While The Bridge is best experienced in short servings (if just to lessen the blow of an extremely repetitive musical score), all of the puzzles can be completed in one session. It took me about three hours to finish all four chapters, each with six puzzles in tow — and the last few puzzles soaked up a rather large portion of that time. But there’s still more to do afterwards. Similar to the Dark World versions of Super Meat Boy levels, The Bridge includes “Mirrored” versions of each puzzle, reversed iterations with a couple of new twists to make them a bit trickier. If you’re hooked by The Bridge on your initial run-through, that’s a fair amount of extra content, and it goes a long way to justify the $10 asking price.

Honestly, though, I had my fill of The Bridge on the first run-through. Once the wonderment of the game’s fundamental mechanics wore off, it struggled to maintain a smooth difficulty curve — it was too easy for too long, and then became frustratingly difficult at once. It’s also hard to ignore just how Braid-influenced the aesthetic is, and it hurts this title’s efforts in crafting its own personality.

With a novel, gravity-based hook, The Bridge offers some quality entertainment to fans of brain-teasers. But its copycat aesthetic makes it feel more like a “me too” indie puzzler. At only $10, it’s worth a plunge for genre fans, but only expect about three hours of gameplay with a startling difficulty spike.