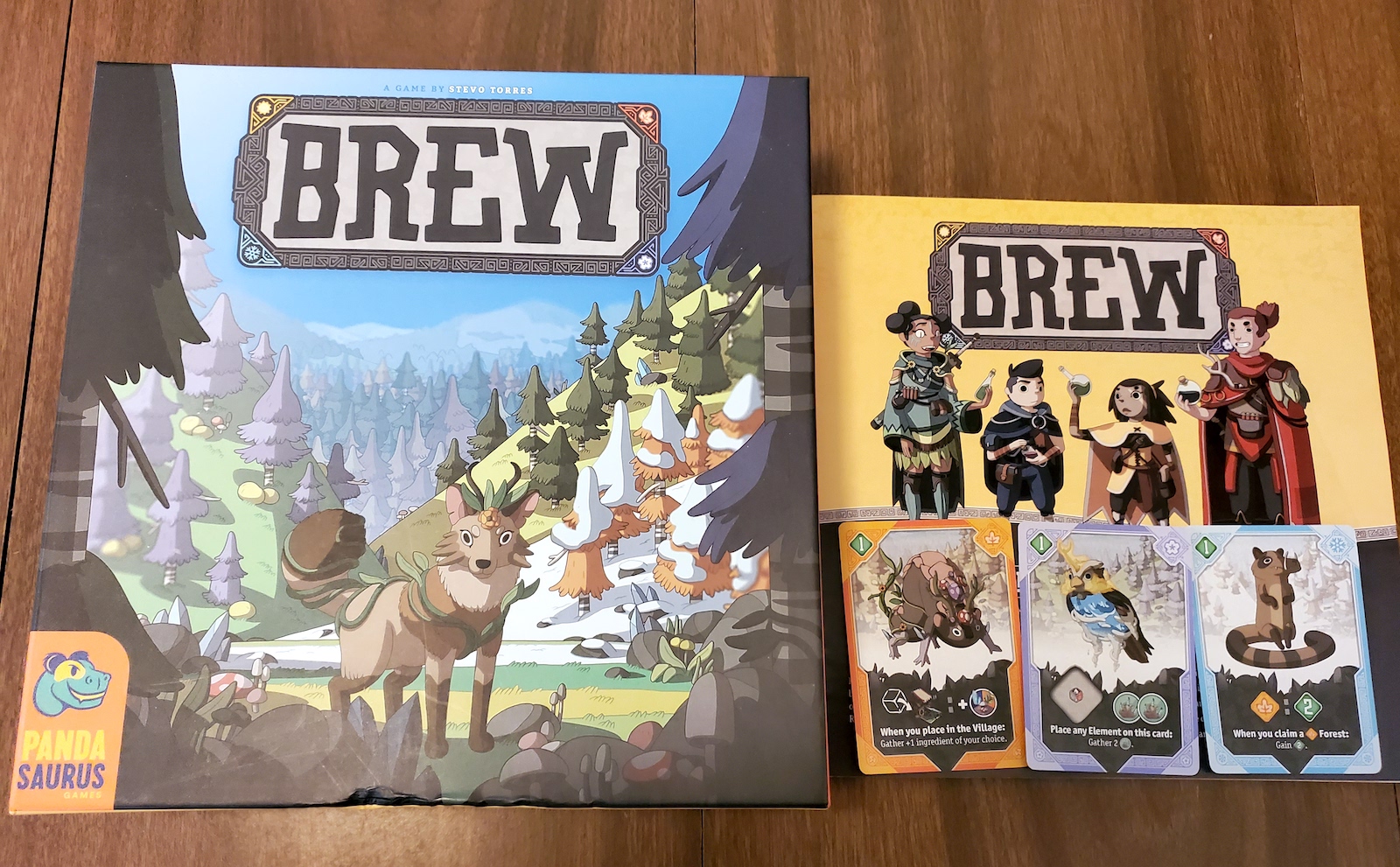 Let me preface this review by stating that I like Brew and have had a ton of fun playing. It is a game that will be remaining in my collection for a while.

Brew has a fairly significant degree of randomness and is an extremely deceptive game. I don’t mean that there’s a lot of deception by players, like in a social deduction game. I mean the game is deceptive to consumers thinking about buying it. Brew isn’t really what it seems.

Looking at the medium-sized box, you can see this gorgeous art and “BREW” in cute, stylized lettering. Flipping it over (or looking at the cards inside the box), you are treated to a bevy of cute-looking forest critters and idyllic landscapes. You can see characters holding potions and the game has a stack of potion cards. There’s even a description on the back of the box about how you are seeking to tame the wildlife and bring back balance to the forest.

This is all deceptive. 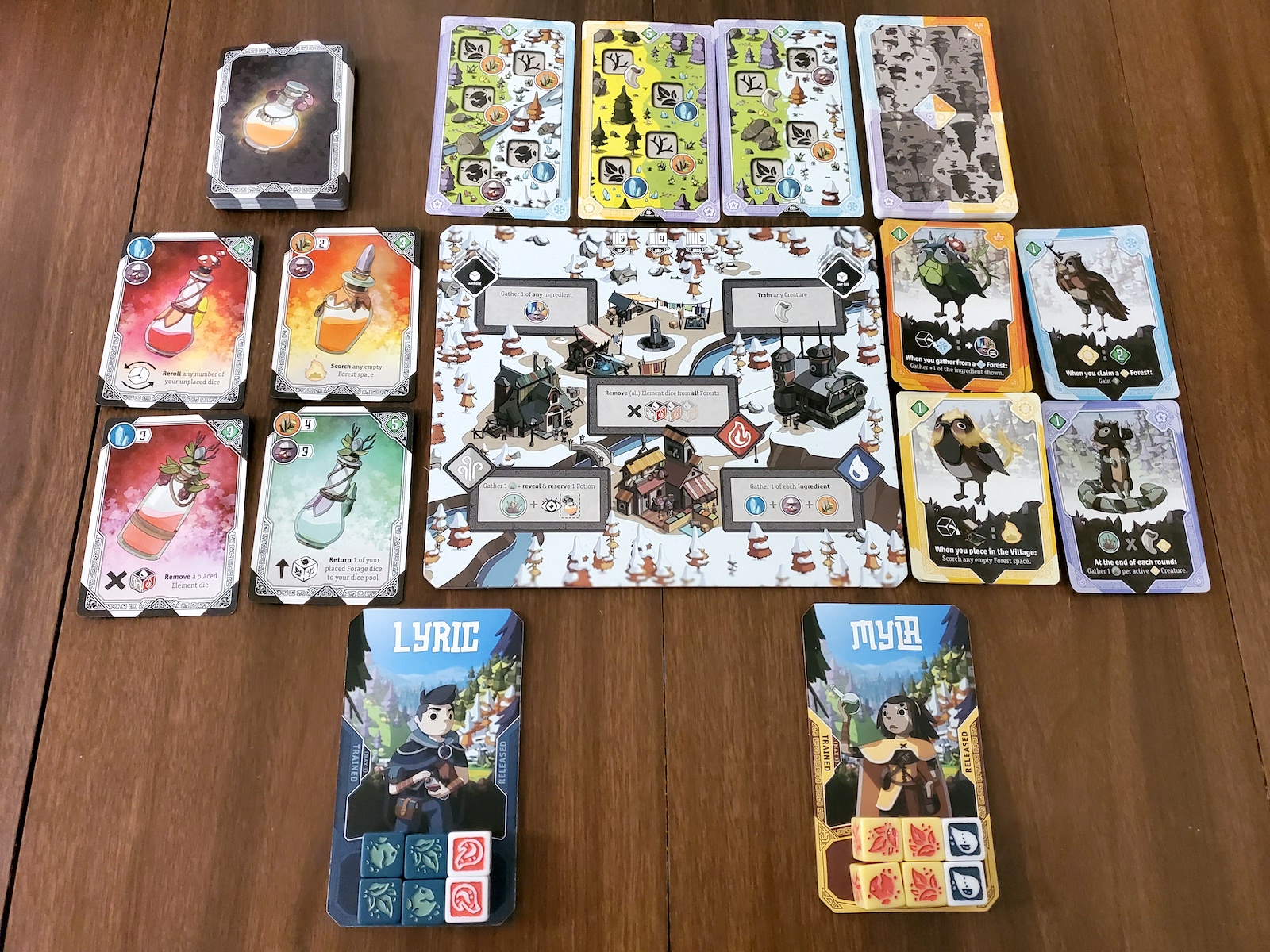 Over the course of 4 rounds, 2-4 players will compete to gain as many victory points as possible. Methods of gaining victory points include claiming forests, brewing potions, training creatures, and utilizing creatures’ special abilities. At the beginning of every round, every player rolls their 4 uniquely colored foraged dice and 2 general elemental dice. Every player will then take turns where they may do any or all of the following in any order: place a die, brew a potion, and/or drink a potion. When a player has no more dice to place, that player passes for the rest of the round. When all players have passed, the round ends. At the end of every round, the village board flips over, the controlled forests are claimed by who controls them (effectively scored and removed from play), the uncontrolled forests are discarded, and (number of players + 1) forests are placed into play.

Like most worker placement games, placing a “worker” (here a die) gets you a benefit, and those benefits can vary pretty dramatically. While the day and night side of the boards have different placement benefits, placing a worker/die on creatures (when applicable) tends to provide ingredients, and placing a worker/die on forest spaces either provides ingredients or the ability to train the top animal on the stack that corresponds to one or two seasons of the forest the die was placed in. Ingredients are used to brew potions and fuel some creature effects, and brewed potions provide an effect when consumed/used and are worth victory points regardless of whether or not you’ve used them. Trained creatures are worth 1 victory point each — unless you have claimed a forest of a matching season/suit, in which case they are worth 3 victory points. While you can train as many creatures as you like, you can only keep 3 (unless you are playing with player powers and playing a particular character) and have to release a creature anytime you’d train past your limit. You may choose which creature to release, and you still keep the points for it.

Here’s where the deception starts to creep in. The game is titled Brew, but there’s remarkably little brewing that seems to occur, at least in the games I have played. There are normally 4 potions in the market available to you to brew. While some potions are really good, a lot of potions are of situational use, and, as brewed potions are replaced by random draws from the deck, that can lead to the market getting filled with potions no one can (or wants) to brew. Also, many potions are fairly expensive. You only get 6 dice a round, there are only 4 rounds in each game, and most dice placements will only get you 1 ingredient. Really good potions are often expensive (perhaps 7 ingredients) and a lot of middling, situational potions are around 5 ingredients. While there is potential to get more ingredients or reclaim dice, brewing potions (worth 2-5 victory points each) is still action-investment heavy and hasn’t been the focal point of any of the games I’ve played. 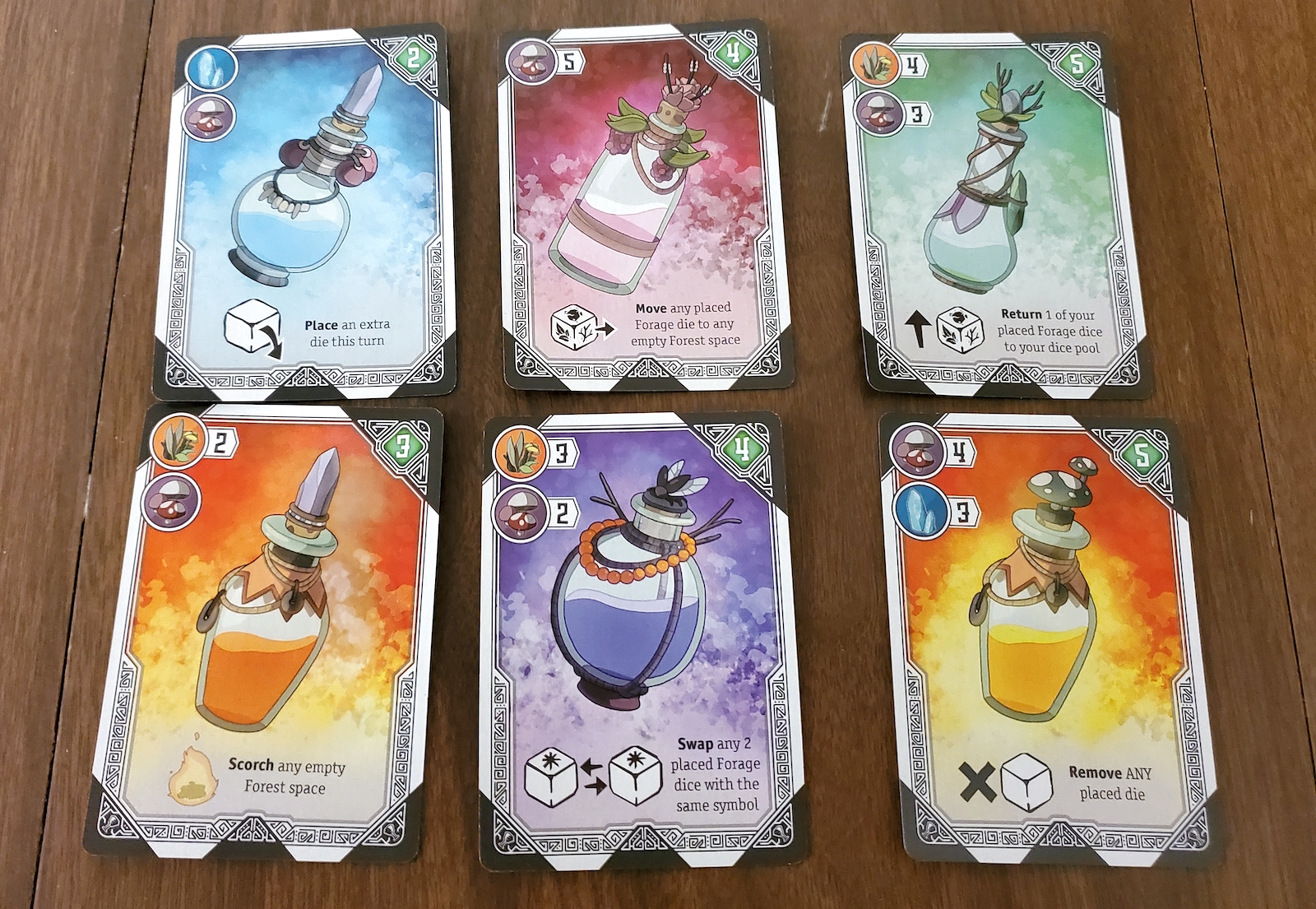 The focus of Brew is not on brewing, but on the claiming of forests and training of animals.

Getting points by training animals is a bit of a crapshoot. Animals are shuffled into piles matching their season/suit, with the top animal only being face up. As there are a host of different abilities animals can have, this can lead to some amazing and powerful synergies – or the animals being basically useless. In one game, I managed to train an animal that scorched forests when I played in spring, one that gave me extra ingredients when I placed a worker/die in spring forests, and one that gave me extra victory points for claiming. All of this put together made it easy to take spring forests and gave me a ton of rewards for doing so. In another game, someone I was playing against managed to train an animal that produced 3 ingredients if any forage die was placed on it and an animal that could convert any 3 ingredients into 4 victory points at the end of every round in the first round. By the end of the game, that was 16 victory points from ingredients from 4 dice placements. While amazingly good synergies are possible, it’s also very possible that the creature on top of the season deck you can train from will not synergize with any creatures you have – or possibly not be particularly good at all. You might never have a shot at picking up a particularly useful creature all game just due to the random nature of the creature decks. 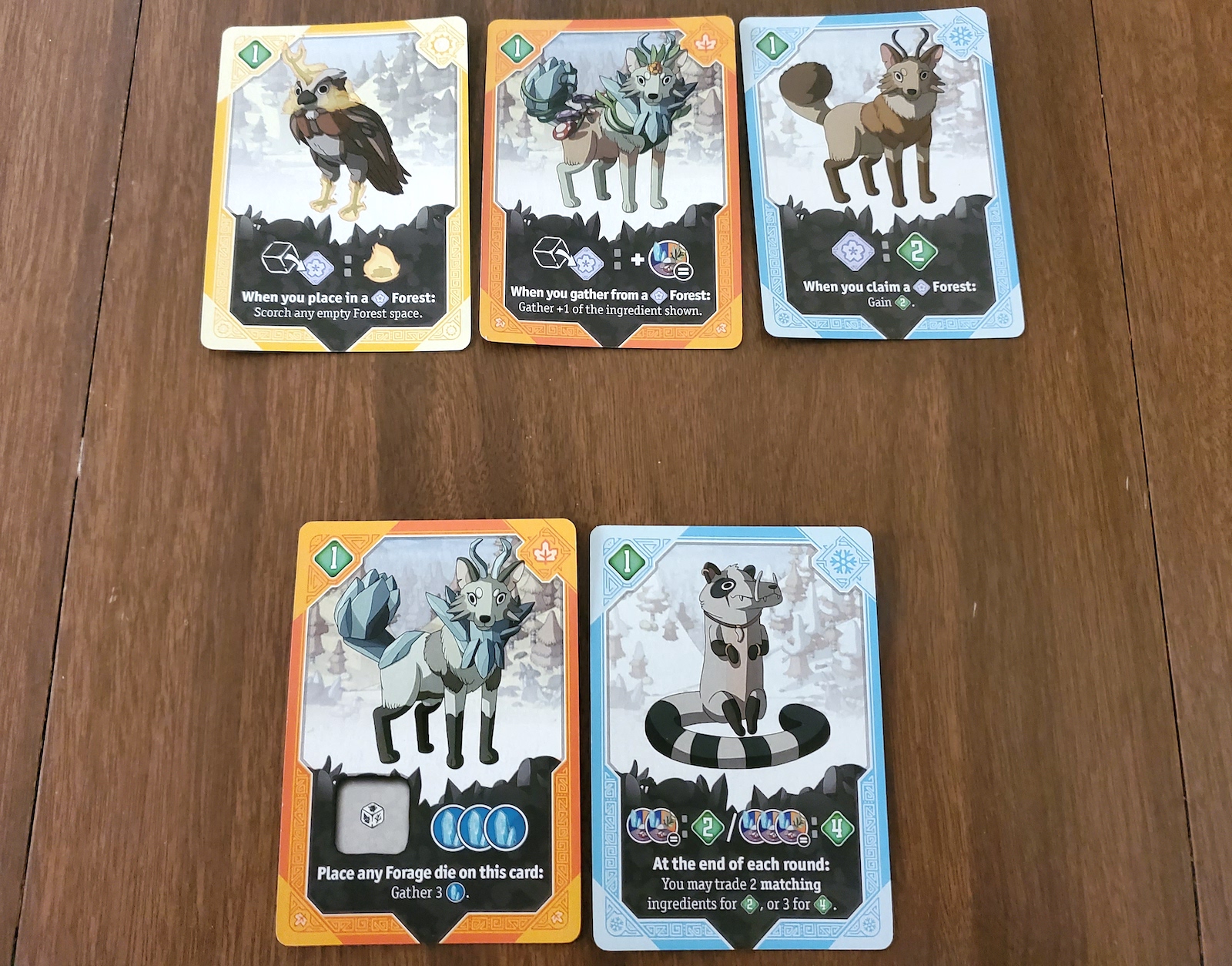 The most reliable, and the most cutthroat, way to get points is by claiming forests, which are worth between 3 and 8 points. In order to claim a forest, you have to control it at the end of the round. In order to control a forest, you have to have more of your uniquely colored foraged dice on that forest’s 3-5 spaces than any set of any opponent’s uniquely colored foraged dice or the total number of elemental dice on that forest’s spaces. So, if you have 2 of your forage dice on a forest, and there’s 1 die on it from each of your 3 opponents, you control it. However, if 1 of your opponents had 2 of their forage dice OR if there were any 2 elemental dice in that forest, no one would control it. 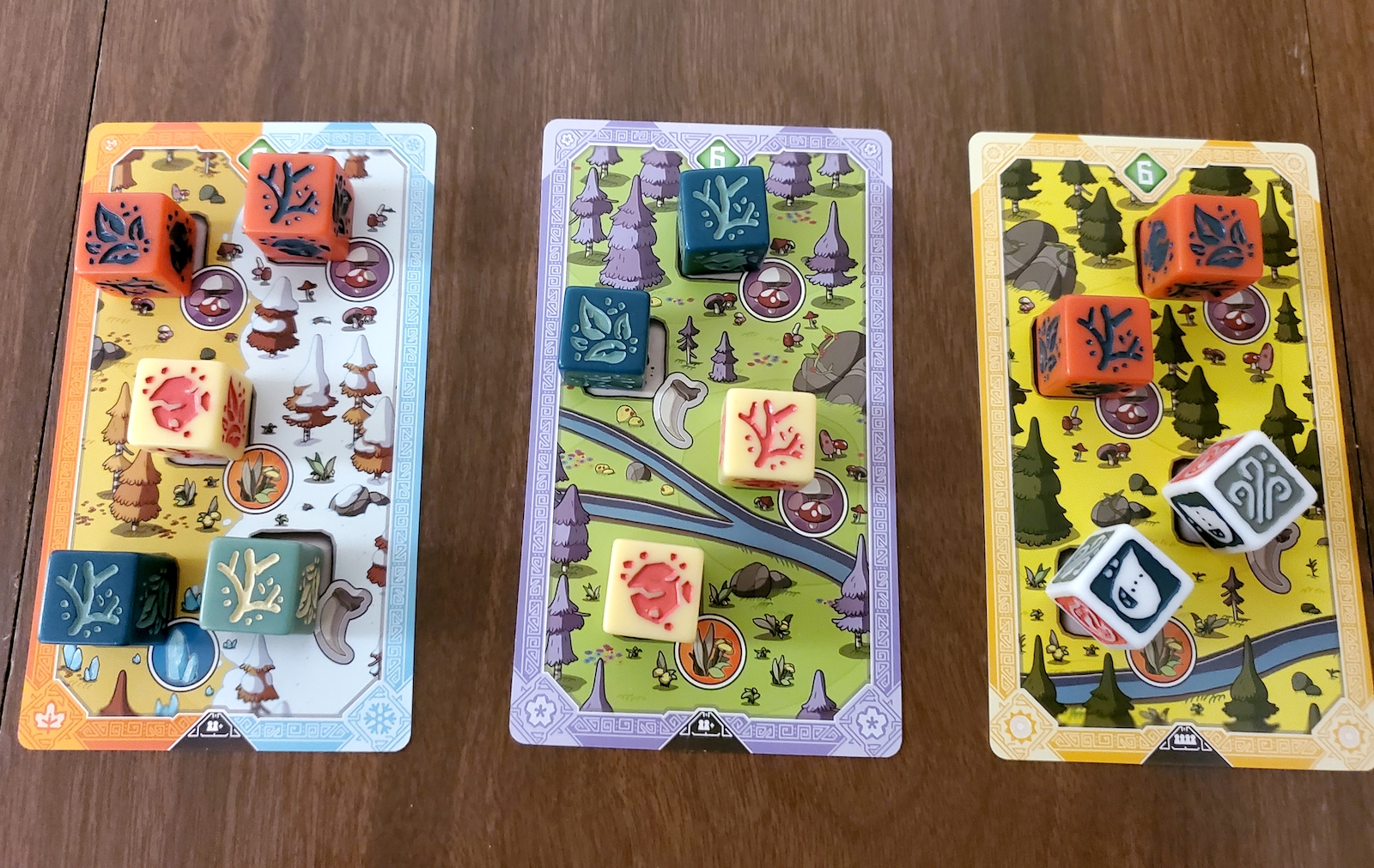 This is where the game gets mean. Not only are you competing for what spaces you can hold, but there are also a couple of abilities that can change what spaces and dice are available. If you rolled Fire on your elemental die, you can place it over any die in the forest, potentially breaking someone’s control of a forest. A night town space and several creature abilities allow you to scorch empty forest spaces, which makes it so no one can place workers/dice there. A number of potions allow you to move, remove, or swap placed dice so you can potentially break someone else’s control or sweep in to gain control yourself. 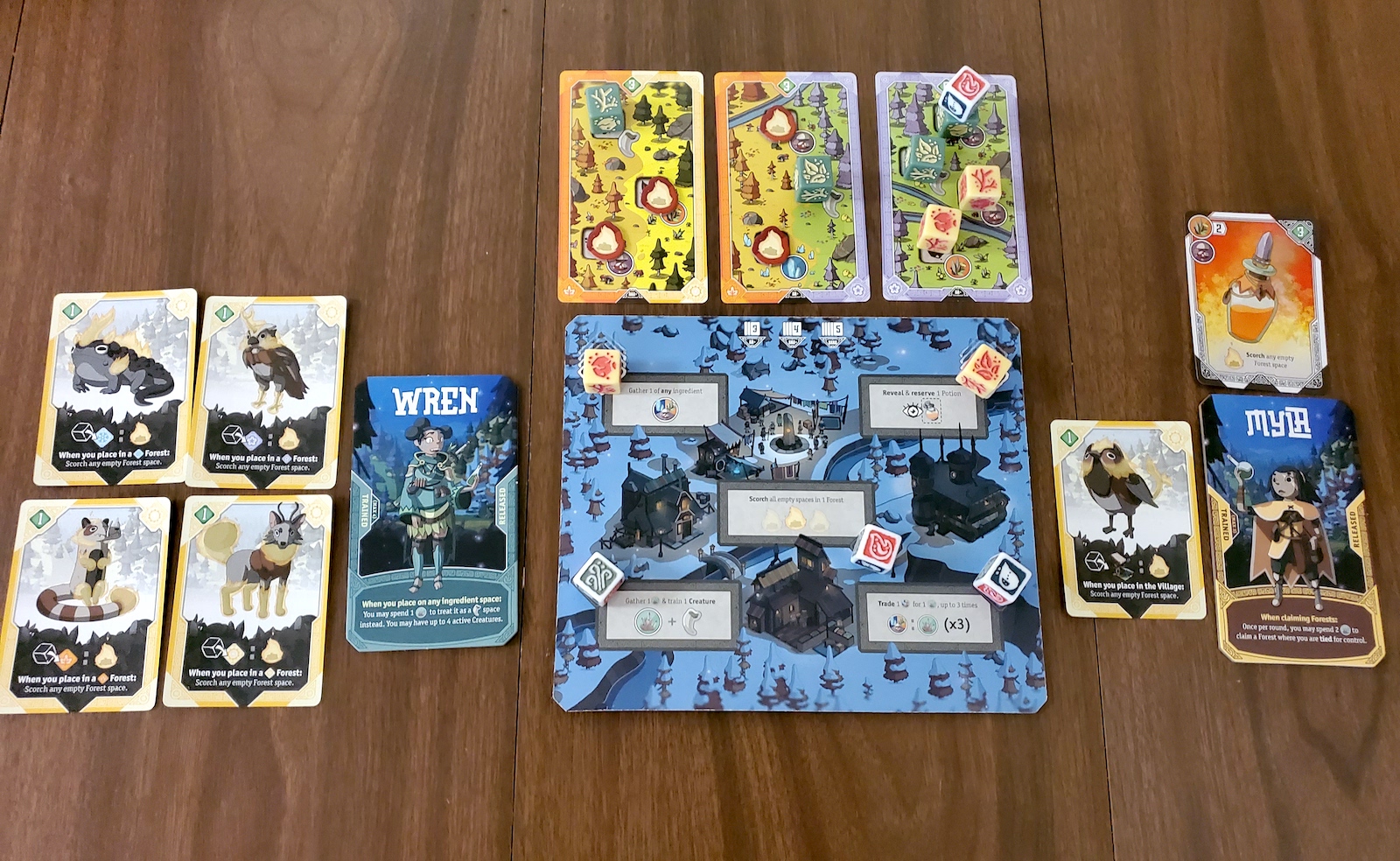 While I loved this aspect of the game, it is also not at all what a lot of people I’ve played with were expecting looking at the box, especially in two-player games. My two-player games in particular have been brutal and cutthroat affairs battling over control of forests. However, if you look back at the box and card art or remember the theme’s premise of bringing balance, you may notice that “fighting” with the other players, hurling fire around, leaving forests scorched piles of ash doesn’t exactly seem in line with the premise the game seems to present.

I’ve had a few games with players who flat would not use the fire die or scorch abilities as they didn’t like the idea of burning down the forest – and I can’t really blame them. The game’s art is “cute” and a stated theme is bringing “balance”. Burning down forests seems really jarring – even if it can be super effective.

And that’s kinda reflective of my overall feelings on Brew. It’s a good game, but it’s probably not the one you expect. It’s called Brew, but brewing isn’t the focus. It’s supposed to be about bringing balance to the forest, but often an effective way of scoring points, or deny points to others, is to burn parts of (or the entire) forest down. It looks like a cute, friendly game – but can get pretty mean when it comes down to taking control of forests.

Each of the four players can be played with unique player powers distributed randomly – but these powers are entirely optional. However, the player powers are not made equally, and some are better than others. In particular, Myla’s ability to break ties for forest control once a round is unlikely to ever actually be used as other players can plan around it. Additionally, there is a set of promo cards that came with pre-orders (and that is supposed to be available at events). These cards grant additional abilities – but are just about as unbalanced as the player abilities.

As forests go away and are replaced every round, and placing on forest spaces normally gets you an animal or ingredient; the game feels less like a merge between worker placement and traditional area control and more like a really aggressive worker placement game.

A rarity among board games, the estimated game time of 45-90 minutes listed on the side of the box is actually pretty accurate in my experience.

The box is an awkward size and the insert isn’t great. The insert doesn’t keep the various ingredients separate, and just look at how small I could condense the contents of the box (below). Given how quick it plays, it would be great if it came in a smaller, easy to carry box. 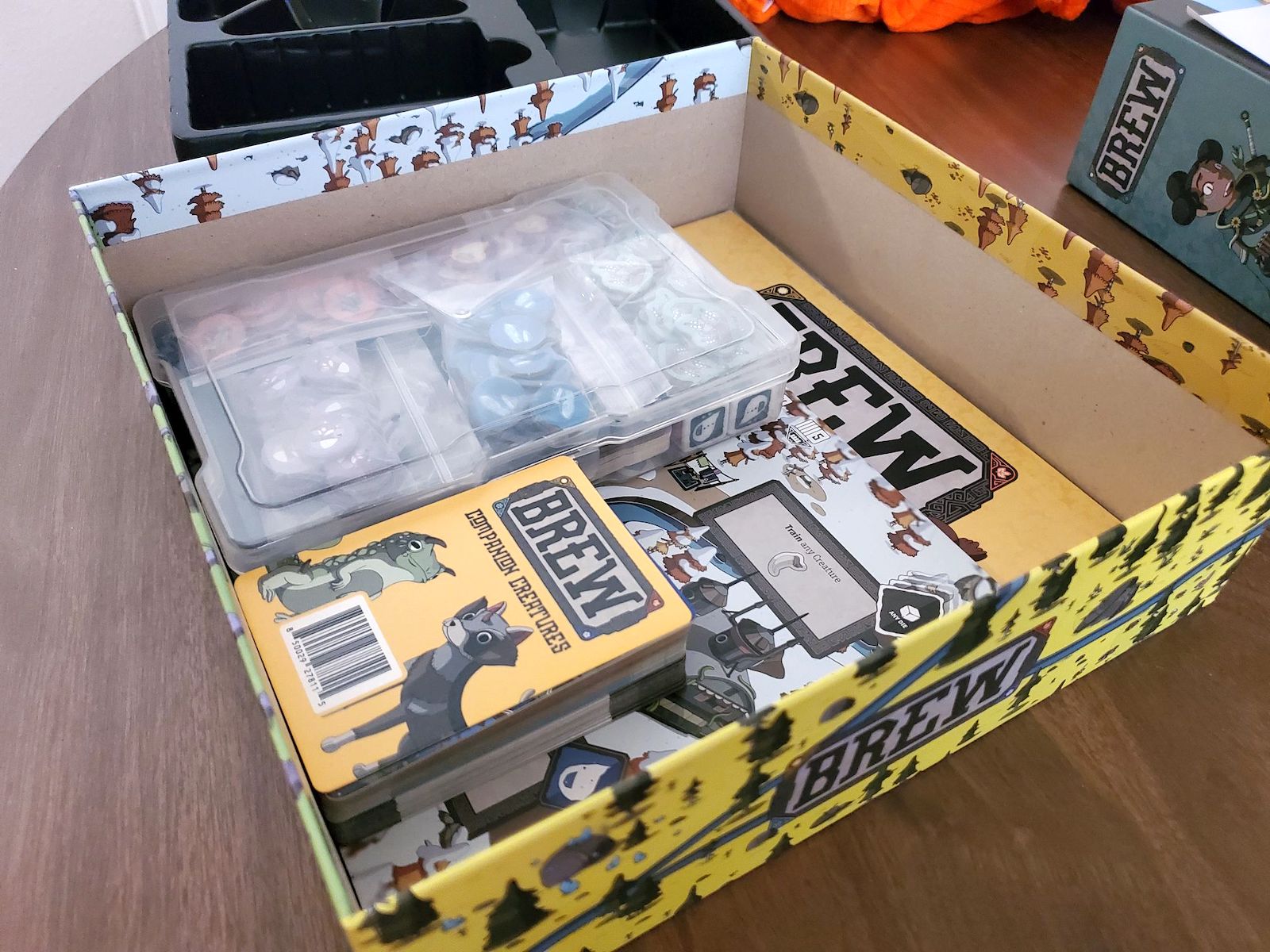 Brew is a good game for the right group of players. Unfortunately, Brew is not the game it appears to be based on the art or publisher provided description. If you want a mean worker placement game that you can play in an hour, Brew is for you. If you want a game about cute woodland creatures, saving the forest, and brewing potions… you probably want to pass.

Dick Marshall’s love affair with gaming started when he was young, and never stopped. Some of Dick’s earliest memories involve playing chess with his dad and playing Missile Command on the Atari 2600. In a former life, Dick worked as a System Administrator, Software Developer, and Manager - among other things.
Related Articles: Brew, Tabletop
Share
Tweet
Share
Submit