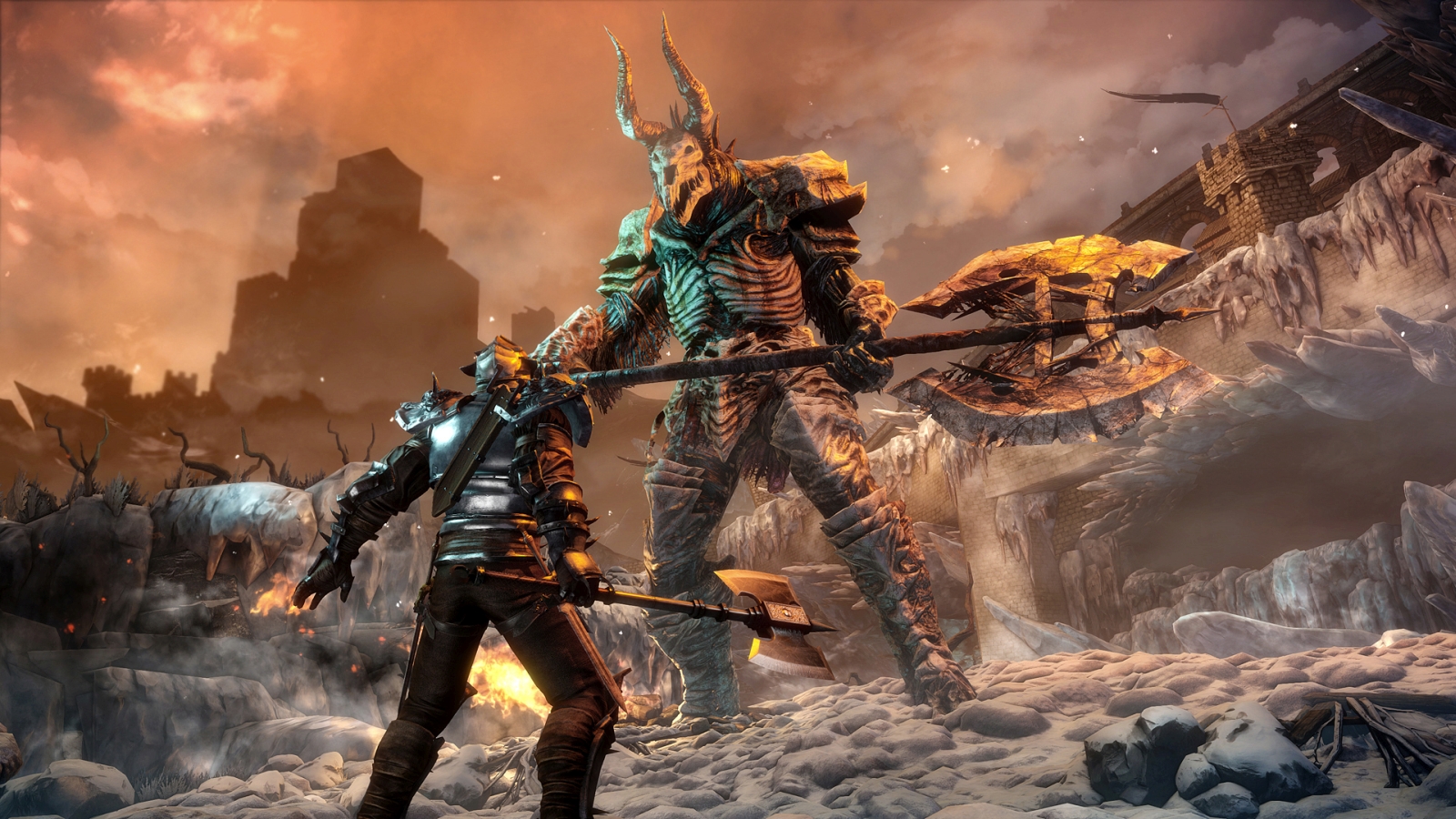 I have a deep appreciation for both steep difficulty and action RPGs. I’ve dabbled in Dark Souls, I’ve made a mess in Super Meat Boy, and I’ve nearly lost my mind in Ninja Gaiden. Like being slapped in the face with a fish, Bound by Flame is going to challenge players unlike anything they’ve faced in a very long time. But perhaps I’m getting ahead of myself.

Bound by Flame comes from Spiders, a French company based in Paris that has previously focused on the grand adventures of Sherlock Holmes and most recently Mars: War Logs – a cyberpunk action RPG that seems to have formed the base for Bound by Flame.

This adventure starts with building your character. Selecting male or female, and picking from a short list of faces and hairstyles, you’ll choose your avatar and name them. Not unlike South Park: The Stick of Truth, no matter what name you pick, your name will end up being Vulcan. Starting in the middle of a war between humans and the demonic undead, Vulcan (heretofore referred to in the female vernacular as that’s the character I have chosen) and her band of friends are attacked by an enormous demon as they exit a ruin. Vulcan is infested by a demonic force during the battle, granting her the incredible power needed to defeat the beast. 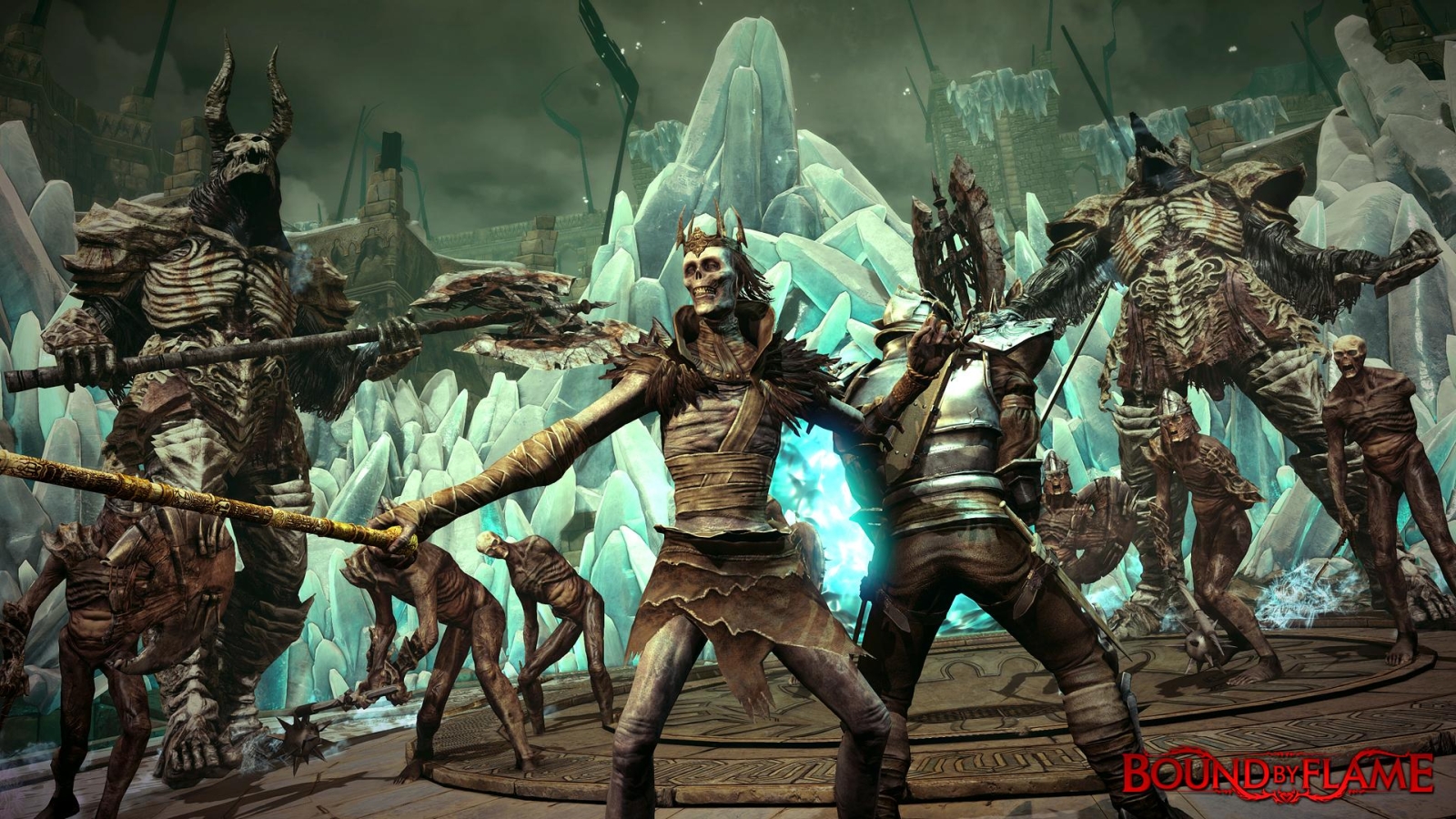 As the game progresses, Vulcan finds herself facing tougher foes (more on that in a minute), and she is routinely tempted by her inner demon (literally) to accept more and more power. As she accepts these dark skills, more of her soul is lost, reflected by her appearance slowly eroding. Horns emerge from her head, her skin becomes ashy, and her eyes look fiendishly awesome. I guess what I’m saying is that I accepted the additional power gladly. With that, let’s talk about difficulty.

Bound by Flame is not an easy game by any stretch of the imagination. I selected the second difficulty option listed as “Hawk” which sounded like the closest approximation of “Normal”. Every foe I faced had at least 10 times the health I did and was able to obliterate my health bar in just a scant few hits. I found myself facing a “You are dead…” screen over and over. I did a great deal of grinding to upgrade my armor and weapons to their maximums, I mastered the blocking and countering skills, but time and time again I suffered the sting of death. Foes would surround me so I spent all of my points enabling Vulcan the ability to block from any angle. They would attack in succession, creating scenarios where I couldn’t counterattack fast enough to exploit the limited window before the next strike. They would also combine ranged attack with melee, ensuring that releasing the space bar long enough to get a ‘perfect block’ so I could strike back couldn’t happen without taking damage. I would use my demonic flame skills to augment my sword strikes with fire, but even that wouldn’t kill a single enemy before it wore off. I tried magic, I tried stealth, I tried every trick in my more than 30 years of gaming skills to try to even the odds. After more than four hours of frustration I finally gave up and backed the difficulty down to the Recruit level to save my sanity. 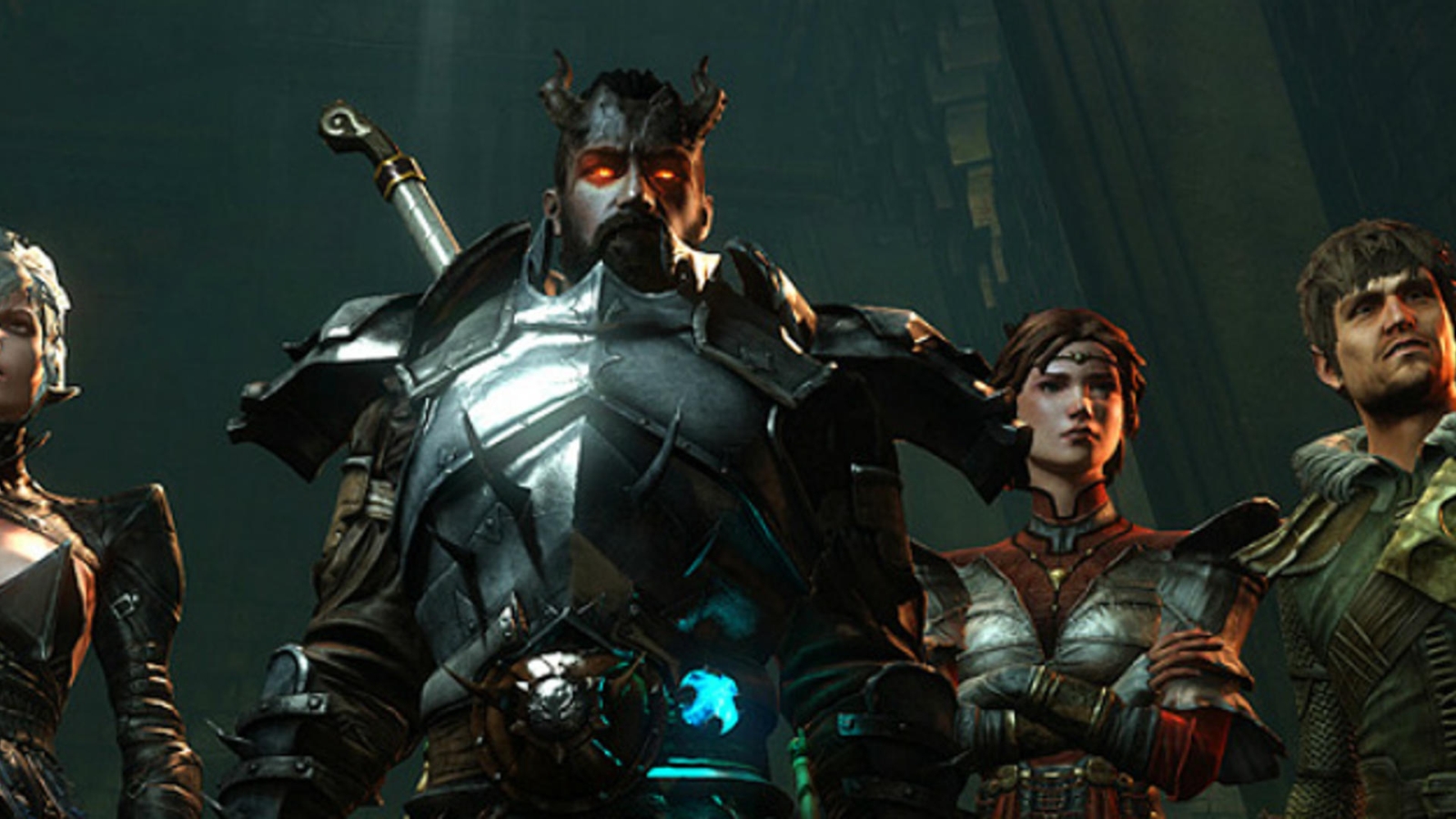 The Recruit difficulty level is a fun little splash in the kiddy pool. I was able to cut through enemies like butter, fire blasted foes into ash, and was free to click right through beasts large and small. With nothing in between the two difficulty levels, it’s hard to know what sort of hell awaits you on the Buffalo and Captain levels above Hawk. I wasn’t interested in finding out.

In a game this unforgiving or entirely too easy, there is one thing that guarantees death – bugs. Occasionally I would run into an issue where Vulcan would simply not engage the enemy. She could lock on and change targets, but somehow she just refused to attack. Spells, magic, crossbows, daggers and more at her disposal, but all she would do is stand there and receive a good beating. It’s probably the one time that I was happy to see enemies kill me so quickly as death cleared the issue.

Spiders made use of the free-to-use PhyreEngine from Sony Europe to bring Bound by Flame to life. Modifying the base product, Spiders augmented the engine to build what they are calling “Silk”. Silk brings solid visual elements like high dynamic lighting, ambient occlusion, excellent shadow work, particles flowing in the air, and so much more. While the lip synch is anything but accurate (mouths flap like a horse eating peanut butter), the remainder of the the visuals are rock solid. You’ll need a beefy system to run it though – my GT70 was only able to pull roughly 20fps with all the bells and whistles enabled. Given that NVidia just released a new set of drivers that boosted those numbers by 25%, I suspect this will improve over time. Let’s talk about that voice work. 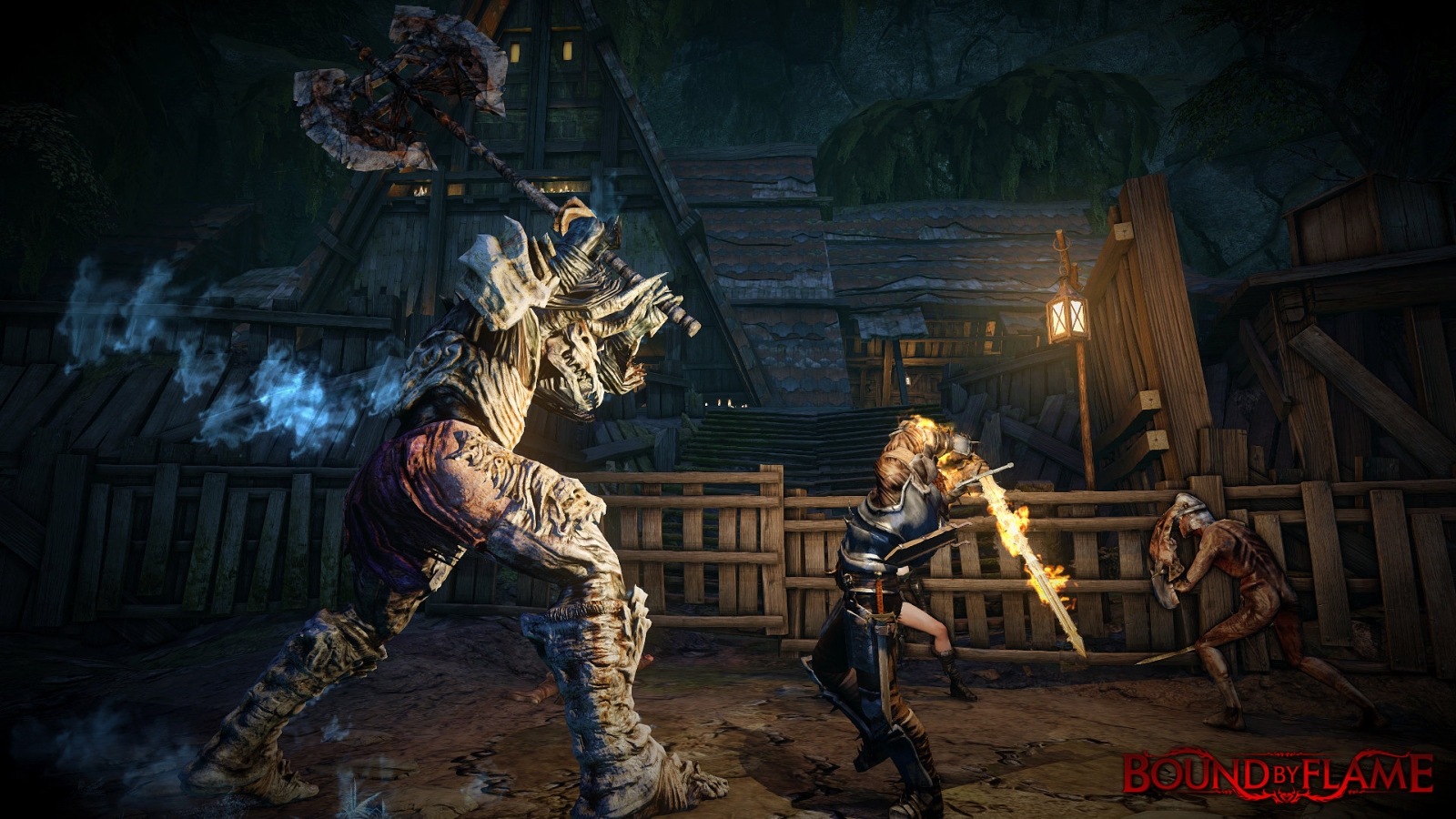 Normally a company focuses really hard on ensuring they have the best voice actor for their lead role as possible, often eschewing the same effort for their supporting cast. In the case of Bound by Flame, it’s the reverse. The female Vulcan is, by far, one of the worst voice actresses I’ve heard in quite a while. The male Vulcan isn’t much better. What’s worse, the script is what you’d expect from a European company sitting around and asking “What do American’s like?” and coming up with “Lots of swearing!” as the answer. I don’t mind cursing (hell, I kinda encourage it), but when it feels forced it really distracts from the story. When it feels like it was added as an afterthought, it makes it laughable.

There are two major pieces of Bound by Flame that received a great deal of pre-release attention – crafting and companions. In the case of crafting, it’s a very basic engagement. You’ll pick up components from softly glowing objects in the environment, bags that drop from slain foes, and from vendors. When you have the right amount of the various pieces you click the giant craft button. It’s a pretty simple exchange, so don’t expect anything revolutionary.

Companions are, for the most part, useless. On Hawk difficulty they die even faster than you. Since you can’t upgrade or outfit them, they are paper targets for the enemy to crush. You can modify their behavior to have them engage directly, use their ranged attacks, heal (if appropriate), or other class-specific orders. Orders can be changed on the fly, just like using any consumable by simply hitting Tab. This slows the world to a crawl to give you a brief moment to collect your wits and to switch up your tactics. When I bumped the difficulty down to Rookie, I was surprised that my companions were still paper tigers. When keeping the casters at bay, firing lightning or healing from a distance, they still often die from the unblocked errant ranged attacks from the enemy. It’s death by a thousand papercuts. Thankfully, your companions will dust themselves off and heal once the danger has passed. 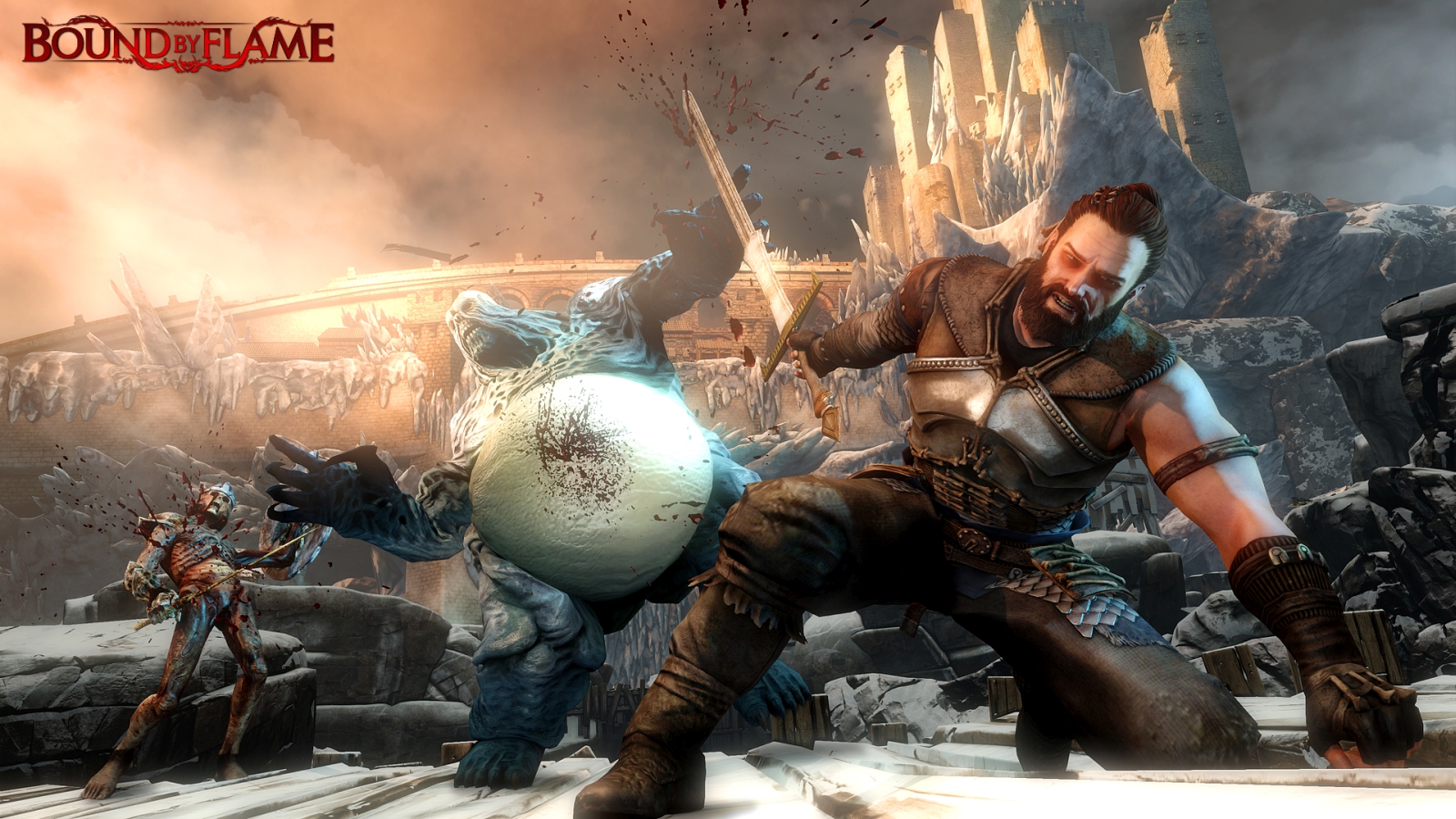 The folks at Spiders probably appreciate and somewhat hate the comparisons to The Witcher, but in some ways those comparisons are spot on. The Witcher can be unforgiving if you are a button masher, and Bound by Flame is equally as punishing. The Spiders team have gone on record saying that Flame is not a sandbox, but it did remind me of The Witcher 2. There are main objectives and sub-objectives to complete. The side missions will lead you into the forest time and time again, giving you more opportunities to grind for precious experience and loot on your way to your destination, making them almost as necessary as the main missions. The game is segmented into chapters, punctuated by a major event and often a rather large boss. These bosses are no joke, requiring all of your skills to defeat.

A total of five companions join Vulcan on her mission, and they aren’t just voiceless blanks. They have complex origins and backstories, and are affected by the decisions you make. So much so that you can alienate them, cause them to break ranks with your crew, develop romantic feelings, or become a lasting friend. It does endear you to your newfound friends, even if they die rather easily. Since you can (for the most part) pick between them at will, you’ll likely find one that resonates and stick with them.

Moral choices are often transparent or rote to the point where you simply select what outcome you want and ride that rail until the endgame. In Bound by Flame you are facing something different – temptation. It’s very easy to accept the Demon’s corruptive influence to make the game’s punishing combat more manageable. Giving into this temptation grants you power, but the corruption of your humanity eventually starts to have physical effects. Push it too far and you may even find it difficult to wear armor pieces. In fact, on the long path your demonic essence will destroy parts of your armor, reducing your overall defense. The upside? Incredible demonic power to eradicate your foes, but making you more vulnerable to ice attacks. Every choice carries pros and cons, advantages and drawbacks. These aren’t aggregated like, say, Knights of the Old Republic, but more at specified key points in the story. This mechanic stands out as a bright spot in this title – choices feel like they have a bit of gravitas, and they certainly matter. Not just to you, but to your companions as well. 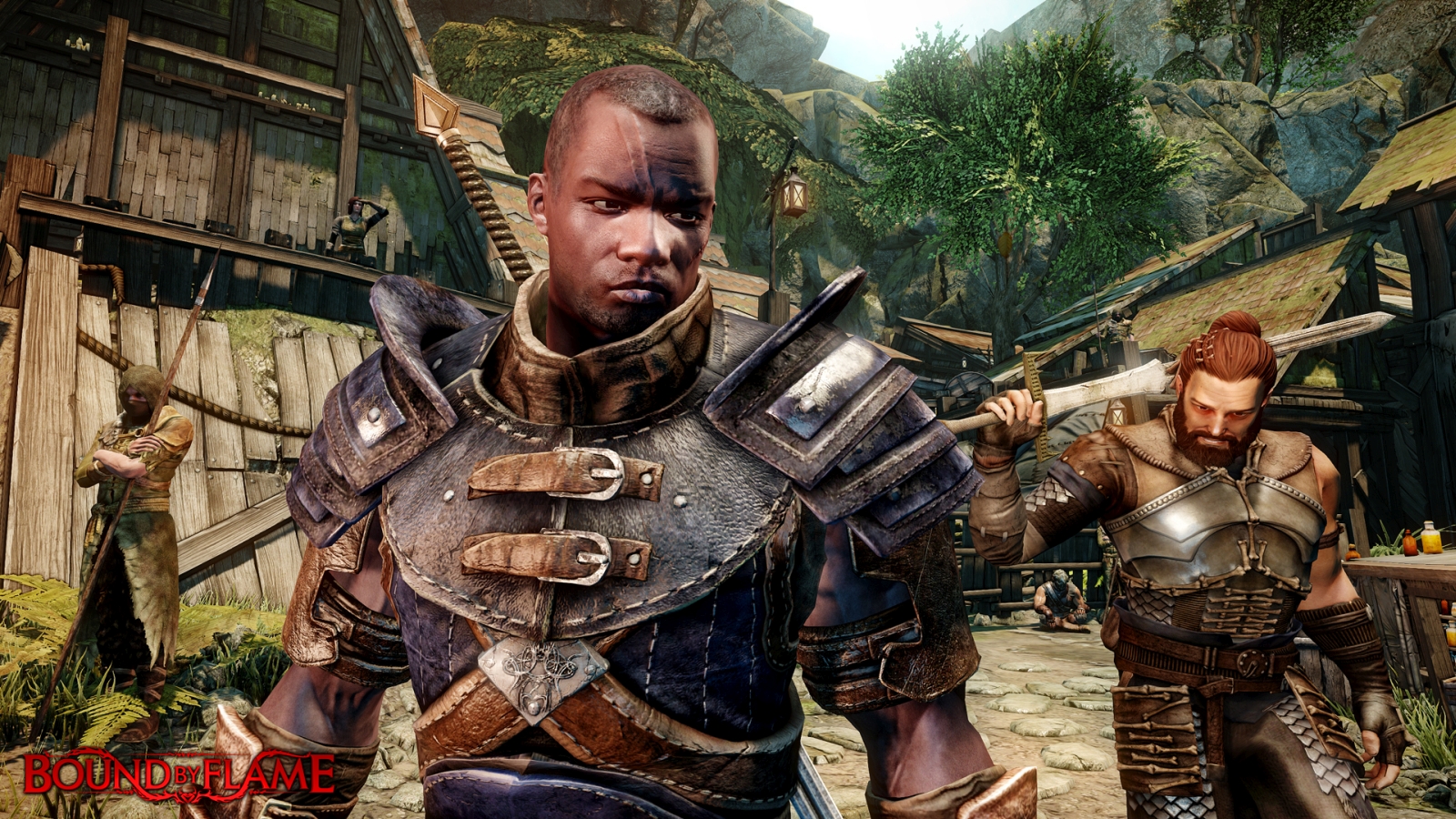 It’s when you step back and look at this game in aggregate that the brutal and unrelenting difficulty begins to make sense. Maybe I’m reading too much into it, but I think it is a function of temptation. Spiders wants players to feel like they have no chance against overwhelming odds, leading them down the dark and demonic path. I believe there are some balancing issues that undermine that effort (i.e. Hawk being too hard, Rookie being far too easy), but I can see where they were trying to go. It’s the combat that really cracks the otherwise decent foundation though. Spiders is certainly getting better at making Action/RPGs, but mechanically Bound by Flame needs improvement, marring the overall objective.

Ultimately Spider’s follow up to Mars: War Logs is a far better effort than its predecessor. You can’t help but appreciate the effort put forth, as well as the fantastic concepts and new approach to storytelling. Bound by Flame provides engaging mechanics and choices that actually matter, if you can stomach the horrible voice work.

Ron Burke is the Editor in Chief for Gaming Trend. Currently living in Fort Worth, Texas, Ron is an old-school gamer who enjoys CRPGs, action/adventure, platformers, music games, and has recently gotten into tabletop gaming. Ron is also a fourth degree black belt, with a Master's rank in Matsumura Seito Shōrin-ryū, Moo Duk Kwan Tang Soo Do, Universal Tang Soo Do Alliance, and International Tang Soo Do Federation. He also holds ranks in several other styles in his search to be a well-rounded fighter. Ron has been married to Gaming Trend Editor, Laura Burke, for 21 years. They have three dogs - Pazuzu (Irish Terrier), Atë, and Calliope (both Australian Kelpie/Pit Bull mixes).
Related Articles: Bound by Flame
Share
Tweet
Share
Submit