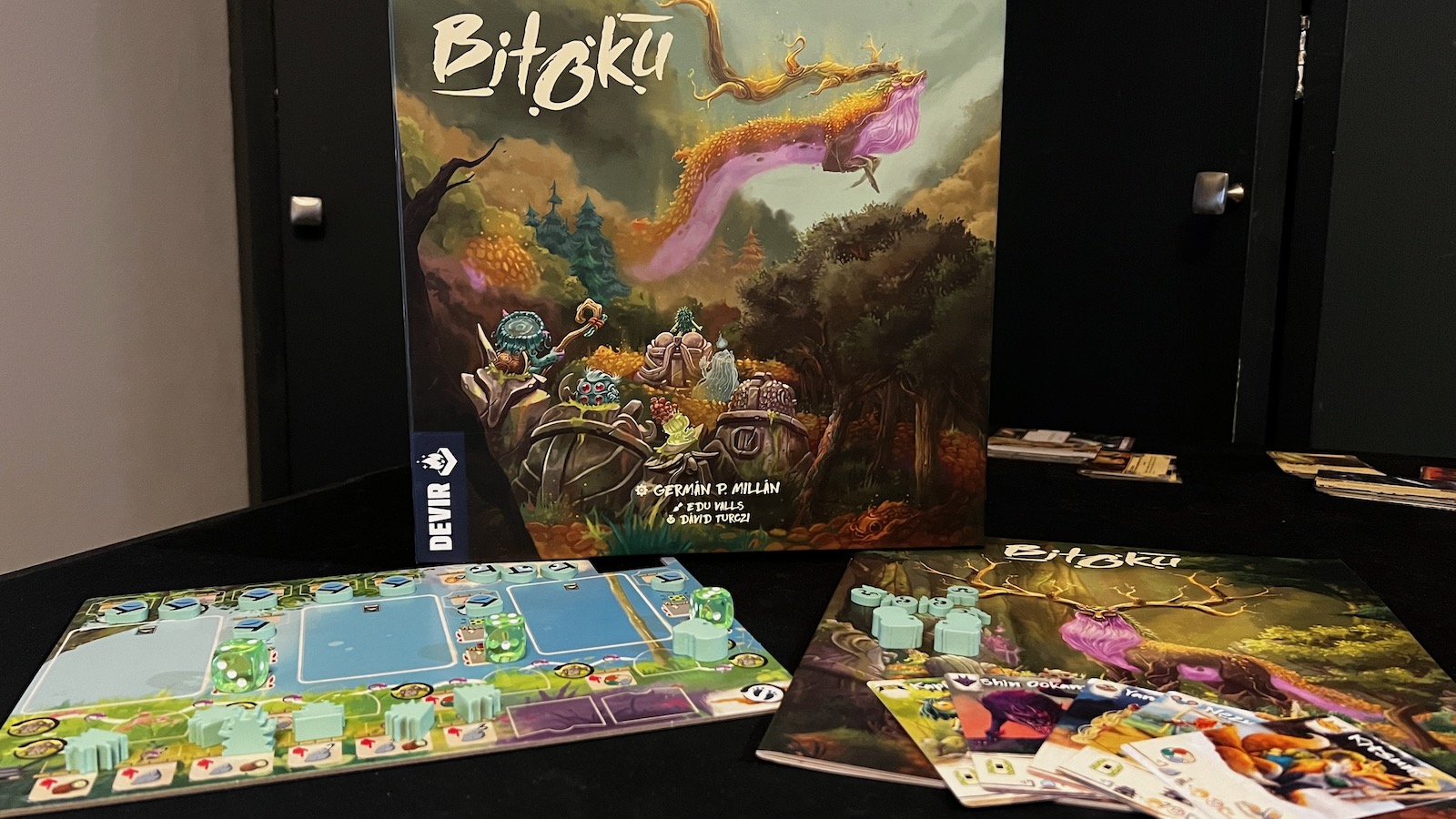 What happens when the great spirit of the forest decides to retire? Who is going to take their place? In Bitoku, you take the role of one of these up and coming spirits trying to prove their worth to the rest of the forest. Over the course of 4 years, your choices will determine how far you make it along the Virtue path to determine the winner and the next great spirit.

Bitoku blends the mechanics of deck building/hand management, set collection, and worker placement for an epic point salad experience. Basically, everything can score you points in this game and it is up to you to decide what route to take. 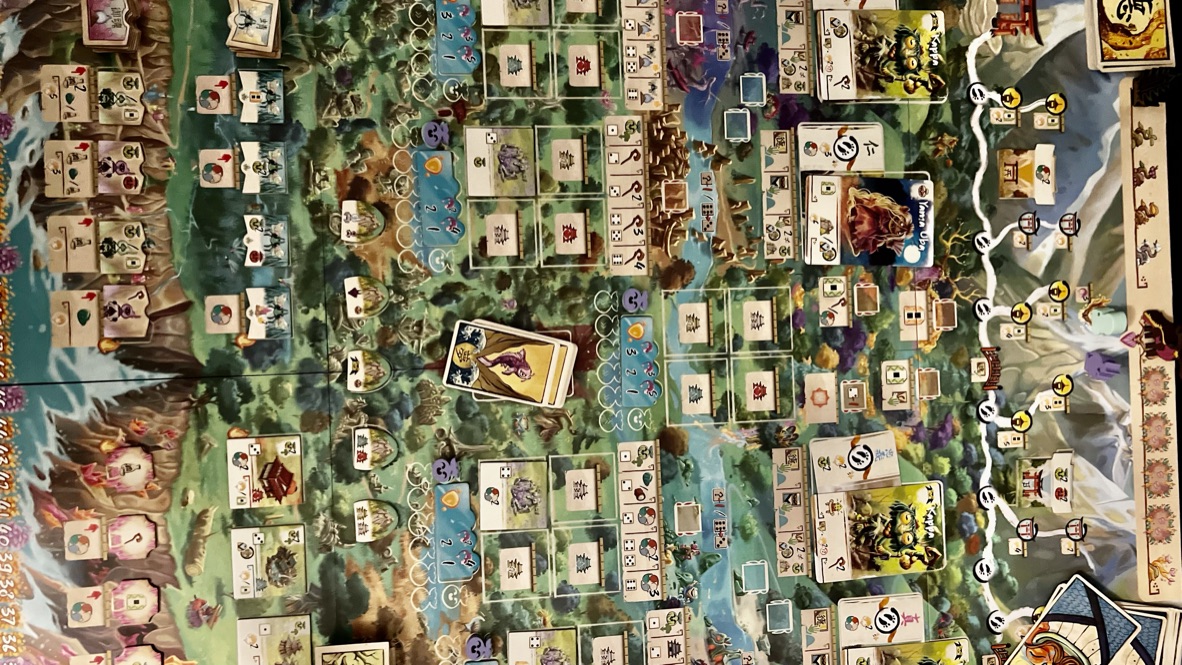 This game has a lot packed into the box! I’m talking about a lot of cards, cardboard inserts, tokens, and physical weight when setting up the game, so make sure you have plenty of table space. The rulebook is a little bit confusing. I mean, there is even a section on page 1 warning you of the undertaking you are about to embark on when learning the game. With terms being introduced that aren’t explained until other sections and sidebars that will make your head spin, I ditched the rulebook pretty quickly and found a how-to video by the creator of the game to learn the basics. I found the included player aides the most helpful with page number references to the rulebook as I embarked on my first playthrough. 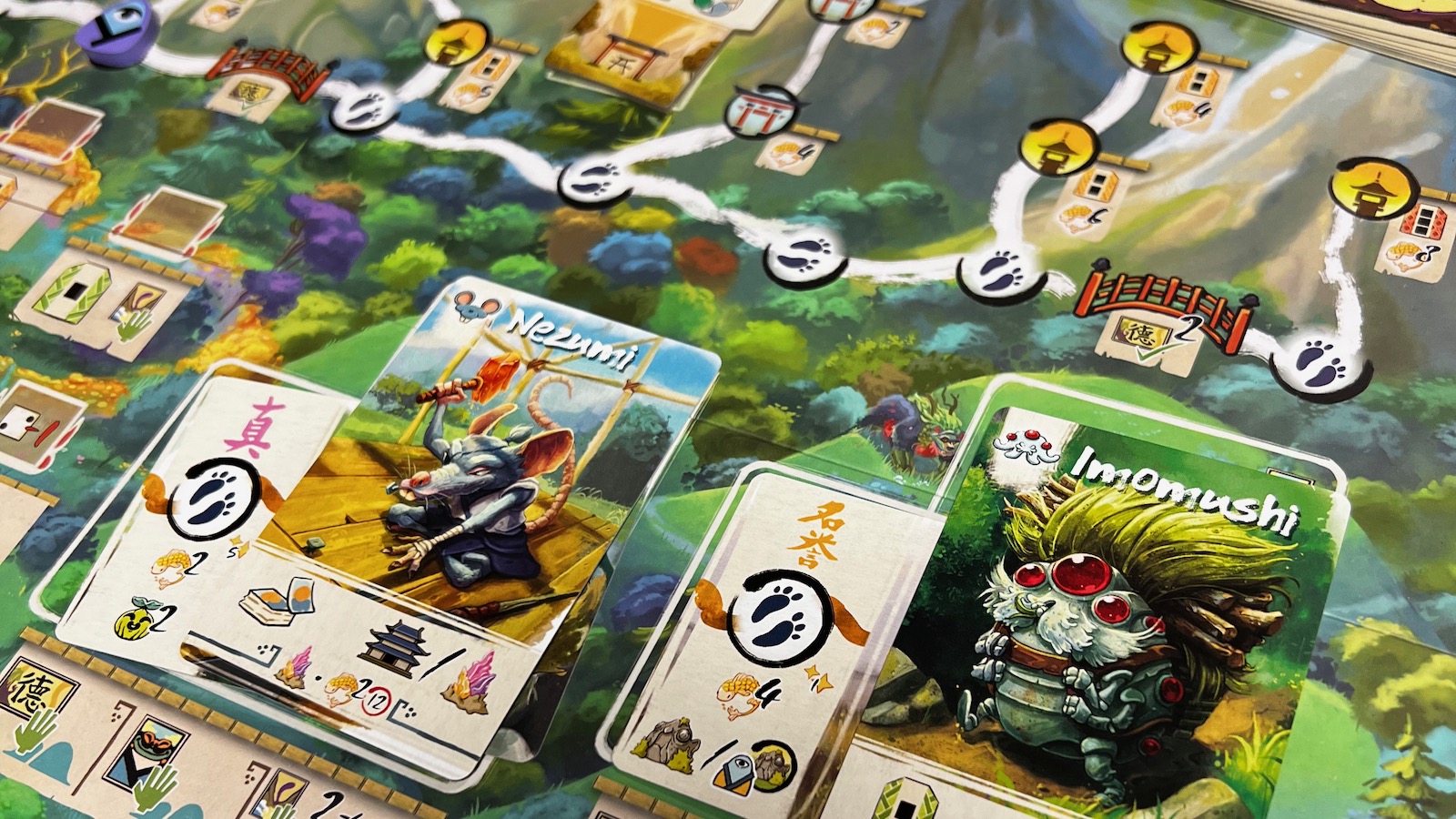 Bitoku takes place over 4 years or rounds, divided by the four seasonally themed phases. Spring, Fall, and Winter are basically your turn set-up and clean-up phases with a majority of play happening during the summer. Players have 3 real actions they can take during the summer.  You can play a Yokai card from your hand to the board. Each player starts with a preset deck and can add more Yokai cards in different areas of the board. The Yokai cards give the player a bonus and unlock their dice/workers in the game. Once a dice is unlocked, players can take a second action by placing the dice in the hills of the board. Dice placement rules change as you get to a 3-4 player game, but essentially the value on the dice determines what bonuses you get from each location. Locations allow you to gain resources, move along a spirit track, build structures, advance pilgrims along paths, purchase crystals, and even allow you to change your turn order in subsequent rounds. Players can always adjust their dice with special tokens to get better rewards at each location. The final action is moving your dice across the river to gain more Yokai or Bitoku cards or a variety of other helpful choices. Players will move through these sequences until everyone has to pass and move onto the next year. 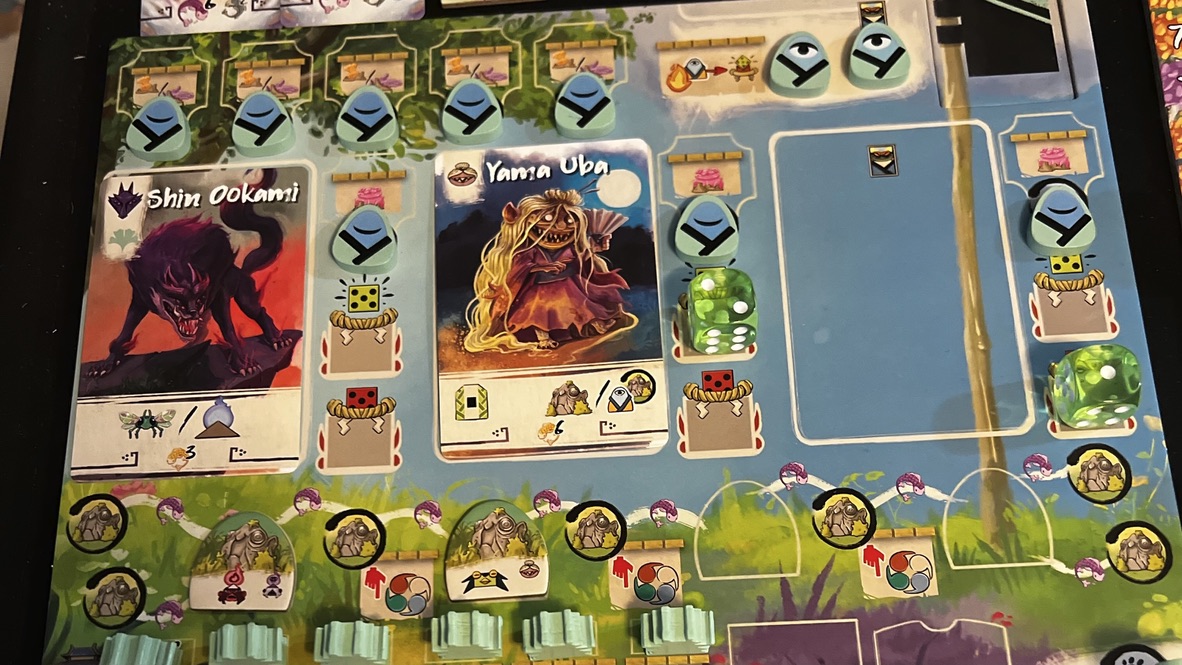 Core gameplay mechanics are pretty simple, but the choices you must make can seem daunting on the first playthrough; there are many different paths to take and every choice seems enticing and frightening to the first time player. What direction do you choose? Players can collect vision cards that guide them to certain goals, they can collect sets of dragonflies and Mitama spirits, work through the Iwakura rocks, awaken pilgrims and set them on a journey, gain Bitoku cards and move their character along the path, collect crystals and gain extra resources, build structures and collect income, or a variety of other choices! Overwhelmed yet? 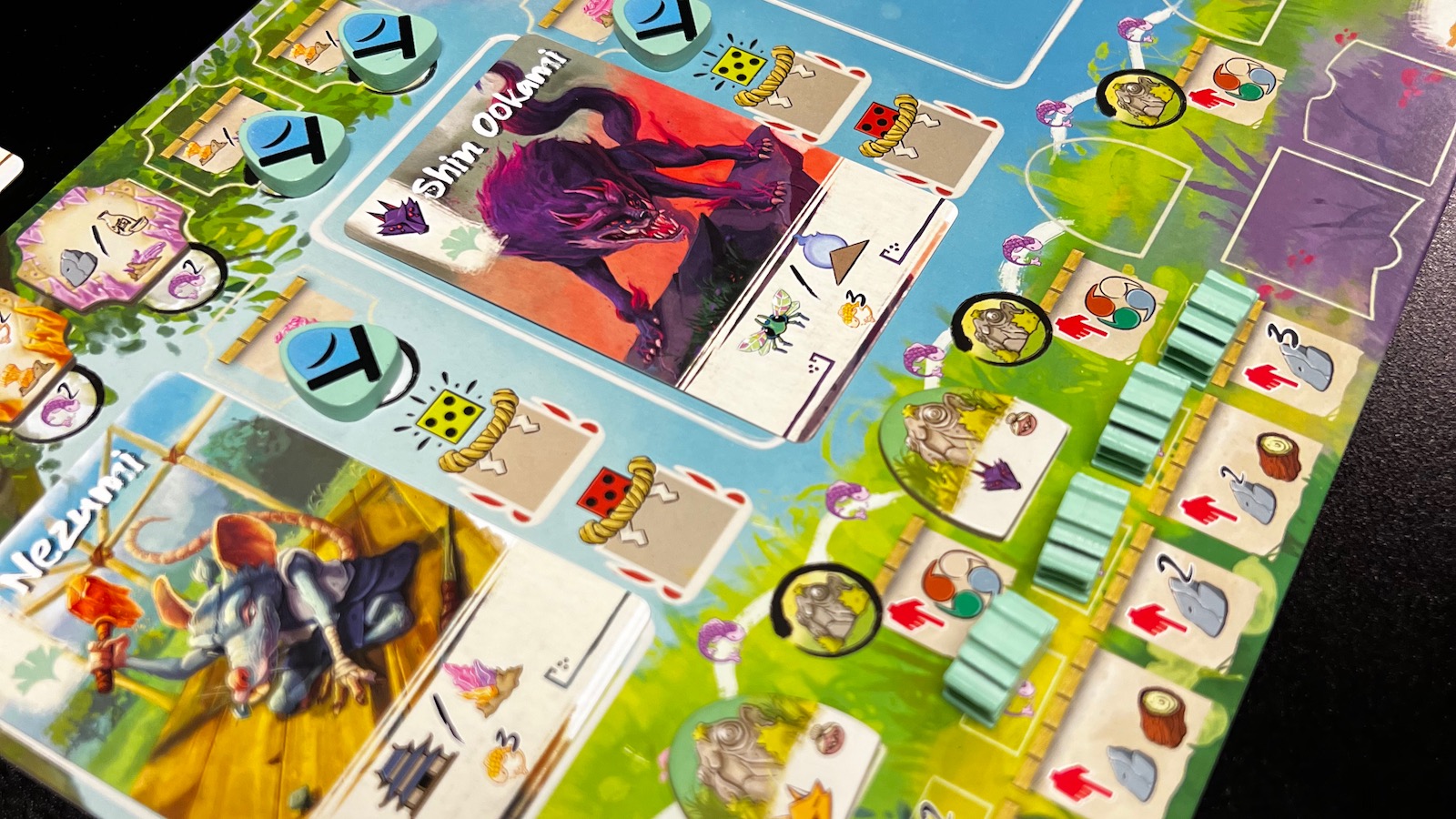 The artwork and components of the game are absolutely beautiful. The player colors are altered from the normal primary blues and yellows and softened to a more pastel shade that works its way through the board and the cards. The board is fully adaptable with a 1-2 player side and a 3-4 player side that comes with cardboard inserts to adapt the game to your needs. The artwork of the player and main boards, the cards, and even the player aids and rulebook show meticulous attention to detail to draw the players into the fantasy world of Bitoku. The board itself, however, can be a bit overwhelming to the eye. With so much detail, it is easy to get lost on what to do and where to place your workers. In fact, a majority of the game takes place on the upper half of the board with the lower half being used as a marketplace/resource storage of sorts. The table presence is definitely one of the most stunning and busy experiences I’ve had the pleasure of setting up. 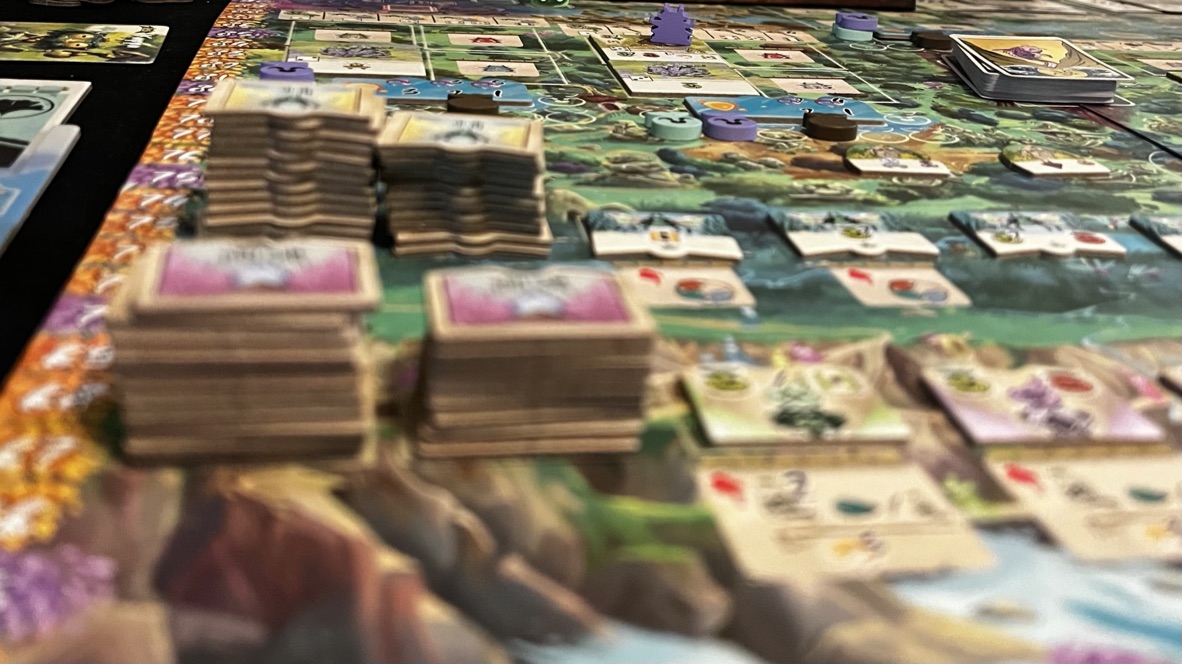 The number of players can greatly change the experience as well. A solo mode, designed by the solo master David Turczi, is played against the horde of Tengu. Tengu and his minions try to take over the forest and drive you away from your path to becoming the Great Spirit. The experience as one player is fun with the AI player using a deck of cards to place their workers and get in your way. There is even a variable difficulty level to make the AI stronger or weaker for a player. The biggest drawback to the solo experience is the sheer amount of components needed to set up! The two player experience was tight, but felt like we were each playing our own separate game without too much interference from the other player. This was a great player count for learning the mechanics of the game. The 3 and 4 player variants add in a whole new strategy when trying to place your workers. The first player who visits a certain area of the board sets the value of that area based on the dice. Every subsequent player must play an equal or higher value to place their dice in the same area of the forest. The 3 and 4 player variants also up the time to play through a game significantly.

All in all, the game of Bitoku is a lot of fun if you enjoy a point salad style game with a ton of choices. I personally enjoyed all of my playthroughs and was able to teach the game fairly easily with the help of the hour long learn to play video from the creator. On the other hand, I could see the layman gamer getting intimidated by the rulebook, the board, and the variety of choices. The mechanics of placing and manipulating the dice as the workers was a fun spin on the worker placement genre and really changed the play in the 3 and 4 player variant. I would love to teach a few of my friends and get this to the table more often, but the teaching curve and decision making time could keep this on the shelf more often than not.

Bitoku is a point salad adventure with a variety of paths to victory. The beautiful artwork and variety of choice make this a chunky game for the more advanced gamers. The path to learning and setting up the game can be a bit of a chore and could turn people away.