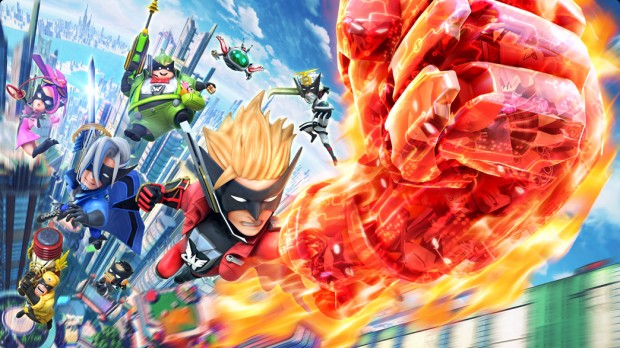 The aesthetic of Viewtiful Joe and the painting mechanic of Okami meet the bombast of God of War. This is likely the simplest way to explain the experience of playing The Wonderful 101, though there’s really nothing else quite like the epic 100-man brawler from Platinum Games. Tiny protagonists brimming with personality literally join forces to face off against foreboding enemies that begin at the size of skyscrapers and only come larger – much larger. It’s gargantuan, chaotic fun, but it carries with it some frustrating camera and control issues, and it’s certainly not friendly to newcomers. Those that tough it out will be treated to some of the biggest, baddest, unforgettable displays of this gaming generation.


The Wonderful 100 (the +1 is YOU) are a secret faction of heroes dispersed the world over to be called upon in a time of imminent threat to planet Earth. Things kick off with such a threat in progress and you take the role of a school teacher rescuing children from a school bus in peril. Once alone, he lets out a henshin call – “Wonder-Eyes Red!” – and reveals himself as Wonder Red, the soon-to-be-appointed leader of the operation to defend Earth from the GEATHJERK, bad guys bent on the destruction of the human homeworld. Shortly thereafter, he teams up with Wonder Blue, Wonder Green, and several other Wonder-people with the sole intention of beating back the baddies and saving the day.

[singlepic id=15865 w=320 h=240 float=left]It’s a bonkers game. As you travel through the various landscapes from a suburban town to an active volcano (even inside the body of a character at one point), not only will you rarely be controlling a single hero, but you will quite often be controlling one hundred of them – all at the same time. It can be visually overwhelming. Between the numerous enemies and your hundred little heroes, it’s quite easy to lose your place in the colorful, cartoonish art style. When zoomed in to get a fix on the good guys, the mob of them will take up nearly the entire field of view. Zoom out and the only objects clearly visible will be the gigantic, lumbering baddies. Until your eye is trained, you may pass up on collectible items rather often and may find that you’re lost on where to go next.

But it’s not only the visuals that will confuse you. At first, just trying to find an effective way to damage a difficult foe can confound. When faced with all but the smallest enemies, performing a simple one-button offensive is about as effective as attacking a tank with a toothpick. This is where the Unite Morph abilities establish themselves as the game’s bread and butter. You’ll use either the right analog stick or the Wii U tablet controller’s touch screen to draw a shape, gathering up your horde of heroes and triggering the appropriate Unite Morph power. This could be a circle for Wonder Red’s Unite Fist, a straight line for Wonder Blue’s Unite Sword, or one of five other primary Unite Morphs that you’ll discover throughout the 15-hour campaign. The larger the shape, the more heroes that are combined, and the more brutal the damage.

But the Unite Morphs can be undesirably tricky to pull off. It’s not as simple as stopping action and tracing a circle on your touch screen. Drawing the shape will pull your Wonderful Ones into the specified formation in the middle of the action, with all of the hazards in play. Since using the touch screen is the easiest way to draw the largest shapes for the best results, you’ll spend a lot of time looking down at the tablet and not at the action on the big screen, perhaps accidentally guiding the good guys into danger. It’s a lot to keep track of particularly in the later stages.

[singlepic id=15867 w=320 h=240 float=right]Worse, once you discover the full suite of Unite Morphs, the game will mistake your drawn shape for another one entirely too often. Draw a circle but it may be mistaken for a triangle, forming a glider when you wanted a fist. Maybe you’ll trace a curved line but the game takes it as a sharp zig-zag, providing claws when you were looking for a whip. When you’re fighting the same huge enemy for minutes waiting for that perfect moment to strike and the game gives you the wrong Unite Morph, it can ruin the opportunity and seriously frustrate. And even when the shape is detected correctly, fumbling around to draw Unite Morphs to leverage split-second windows of opportunity can feel awfully clumsy.

Thankfully, this is not indicative of how combat in The Wonderful 101 feels the majority of the time. Experimenting with the various Unite Morph abilities feels unlike any other brawler. The way that each power is paired with enemy weaknesses always follows logic. And when you’ve been poking at an opponent for several minutes with little success, finally discovering the right approach is extremely satisfying. Once you’ve put the first several hours under your belt, you might find yourself on another run at the earlier levels just to see how much you’ve improved. But you will likely need those first several hours before you ever feel comfortable playing The Wonderful 101.

What’s more, there’s another common threat to your progress that you can’t practice your way out of: the camera. Even as the amount of characters on-screen can feel overwhelming, you’ll regularly find yourself wishing that you could zoom out further than is possible to fit even more in the field of view. Many enemies can be very tough, providing only split-second visual warnings ahead of an impending attack, and it devolves into an unfair guessing game when the attacker is off-screen. There are also moments when your characters will be engaging in conversation during active battle with the dialogue taking up the bottom quarter of the screen and eclipsing some of the action – the subtitles cannot be disabled. In addition, the viewing angle makes it difficult to judge jumps during some platforming sequences.

[singlepic id=15866 w=320 h=240 float=left]The worst offender, however, lives in the portions of the game that take place in the interior of buildings or objects. It’s a shame, because these are some ingenious moments of The Wonderful 101 – the gameplay is moved to the Wii U tablet controller screen, the actions that you perform there affecting the larger-scale results on your primary display. Unfortunately, some of these areas are cramped, providing a chase camera behind your heroes. Since the right stick is dedicating to drawing Unite Morphs, it can’t be used to control the camera as it is in most modern games. The tablet’s motion controller is employed to help look around, but using the left stick to move then changes the camera’s orientation again, leaving your own body in all sorts of strange positions as you try to get a look at your desired target. Unless you’re standing up and able to move around freely, these sections can be maddening – as clever as they are, I learned to dread them.

When a boss fight happens, all is forgiven

But don’t worry. Whenever you’re laboring through one of these frustrating elements and contemplating if your time is being well-spent, it won’t be long before you come upon a boss fight. When that happens, all is forgiven. The sheer epicness of these battles is rivaled only by the most grandiose of God of War encounters. The Wonderful Ones often look the parts of ants when compared to the monumental size of these foes, and a boss fight will typically consist of an entire level of play, rather than simply providing an exclamation point at the end of one. Each boss feels different from the next, and is capped off with a series of quicktime events that are true sights to behold. The scale of these encounters can be dizzying at times – engage in battle with a gigantic robot whose fingertip matches the size of one of your heroes, only to later commandeer it and engage with an even larger enemy that dwarfs the robot!

The immense action is complemented by oodles of charm. To go along with its standard gameplay, The Wonderful 101 always manages to fit in an unexpected spin – be it a short minigame, or one of several homages to classic games such as Punchout, Zaxxon, or Space Harrier. The Wonderful Ones themselves also each enjoy a unique personality. The interactions between them can be cheesy, but in a way that will make you smile, and there are moments of legitimate comedy. The French, rotund Wonder Green is always holding some type of food while he pokes fun at Wonder Blue, the resident “bro” on the team. Wonder Black silently taps away at what appears to be a Nintendo 3DS and Wonder White tries entirely too hard to be introspective and poetic. Having all of these characters together will cause you to look forward to each dialogue scene. All this, and the game does turn to some surprisingly emotional story moments late, encouraging genuine interest into how the plot unfolds.

[singlepic id=15864 w=320 h=240 float=right]In addition to the lengthy single player campaign, The Wonderful 101 includes Wonderful Missions adding several extra levels that can be played with up to four other players. Playing with friends makes the already chaotic combat even more ridiculous, but there’s a catch: not only is the multiplayer local-only, but the additional players can only join in using Wii U Pro Controllers. Wiimotes just won’t cut it. Implementing multiplayer gameplay with remote players over the Internet would’ve solved this problem, but alas.

A wonderful game in spite of its issues

The Wonderful 101 is difficult to master, but the fact that it’s difficult to learn is what will hamper the progress of many would-be adventurers looking to join the battle against the GEATHJERK. The finicky Unite Morph feature is a double-edged sword – it provides truly original and satisfying gameplay but also is the source of much of the game’s frustration, the remainder of which is easily carried by the occasionally horrendous camera. But while these technical limitations would cripple most titles, The Wonderful 101 combines style and scale for what amounts to a wholly unforgettable experience. In spite of its issues, this game remains a must-play title for Wii U owners, and a feather in the cap of a console that desperately needs them.