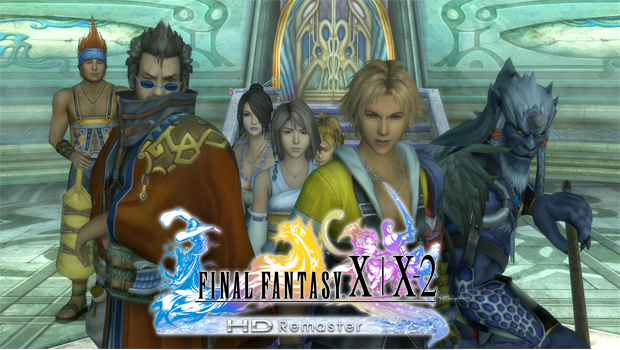 A lot has changed since 2001. Google became a verb, reality took over TV and people started carrying personal computer phones in their pockets. Massive leaps in gaming technology have prompted a culture that continually feeds on new and exciting innovations while not necessarily promoting games with lasting staying power. So it’s nice to see that after over a decade of change, Final Fantasy X has successfully passed the test of time, and still stacks up to modern games. FF X / X-2 HD Remaster takes two of the biggest RPG’s of the PlayStation 2 era and packages them for the first time together in a definitive bundle that gathers the entirety of its internationally released content onto a single PS3 disc.

Obviously, the first thing to notice is the graphical enhancements and, to put it quite simply, it looks great. The colors pop with vibrant energy, the jagged edges have been smoothed and the increase in detail breathes new life into the environments. The aspect ratio has also been updated from its native 4:3 (remember when TV’s were square?) to today’s 16:9 widescreen. Perhaps the largest difference can be found in the upgraded character models. The cast has been overhauled in favor of less angular and more natural looking designs that help convey emotions and bring this already great looking game up to par with current PS3 standards.

The audio is enhanced with a much fuller and grandiose sound. The original character dialogue is crisper and clearer, and the sound effects pack more punch. The new soundtrack uses real instruments in place of the original midi tracks, a choice that might trouble some traditionalists, but I found the enhanced audio to be extremely well handled and much more effective at conveying the feeling of the emotionally charged story.

Even without the presentation updates, there’s still plenty of new material to entice both old fans and newcomers alike. The FF X HD remaster includes content previously only available in Japanese and European versions of the game, including new boss fights like the Dark Aeons and the ability to use the expert sphere grid, allowing for further character customization. There’s also the option to watch the short animation “Eternal Calm,” which takes place two years after the events of FF X. FF X-2 has new dress spheres, a creature creator and fiend arena tournament minigame, as well as the dungeon crawler-type side title, “Last Mission.”

These are massive games, and there is an astounding amount of content on this disc. A straight play-through of either FF X or FF X-2 will fetch around 40 hours each, and that’s even discounting the time needed for side quests and exploring which could easily double that number. The sweeping story that unfolds in FF X is one of the most enduring and emotionally engaging of any RPG, and I can’t recommend it enough for anyone who hasn’t already experienced it. The depth that the characters display, and the complex relationships that they form are remarkably moving. And even though I’m not as much a fan of the light-hearted and less serious tone of X-2, I still appreciate it as a sequel, and it’s an effective RPG in its own right.

Both games have excellent combat systems that help kick up the pacing during the lengthy storylines. FF X’s innovative turn-based system allows players to change their party and weapons on the fly, opening up new strategic options for pairing the most effective characters against enemies. It’s a real blast to play, and the fights, particularly the boss battles, are always something look forward to. FF X-2 uses a variation of the series’ classic active time battle system combined with a unique element called the “Garment Grid,” which allows characters to change their class, similar to the one used in Final Fantasy Tactics. Both combat systems are well balanced and fun to use, which removes the tedium from the necessity to level grind.

Not everything’s peachy keen in this release. Since it’s a remaster and not a remake, there are still some signs of PS2 ageing peeking through. The character movements are sometimes awkward and stiff, and the movements of the mouths have a tendency to look like Jim Henson puppets. As gripping as the story can be, it can get a little long-winded at times, making the lack of an option to skip cutscenes a sorely missed opportunity.

Sadly, the Cross-Save feature is another source of disappointment. Without going too much into the disappointing lack of a Cross-Buy option (using this feature will run you $80), I found the interface of the Cross-Save to be cumbersome and poorly implemented. It’s a great idea in theory; by using this feature, FF X / X-2 HD Remaster can upload saves to the PSN Cloud for remote loading on either the Vita or PS3. However, rather than using a system that automatically uploads linked saves onto the cloud, Square Enix decided to go with an unwieldy interface that requires a manual relink every time a new save is made. And since there’s no way to access the Cross-Save system inside the game, the only way to link a save to the cloud is by quitting the game entirely, reopening it again and selecting the option from the opening main menu screen. As excited as I am to be able to level-up my characters on the go, the time consuming headache of quitting and reopening the game each time I want to jump systems is terribly inconvenient.

With all that said, these issues still can’t take away from the over-riding quality of this release. FF X / X-2 HD Remaster offers a massive amount of content in a fully polished presentation that reminds us how good RPGs are supposed to play. The innovations that FF X introduced, such as full voice acting and 3D renderings, have since become RPG standards, although they’re not often done as well as these games have achieved. When I first played FF X over a decade ago, I was far too blown away by how new and exciting it all was that I wasn’t able to fully grasp or truly appreciate the underlying rare and beautiful game that it actually is. Playing it now, I’m amazed at the power and scope that this title holds and how much better it is than most modern day RPGs.

It’s amazing to think of all that has changed in our daily lives since Final Fantasy X was first released in 2001, but it’s nice to know that some things never change; like when a game is great, it will always be great. FF X / X-2 HD Remaster takes two great games and polishes them to a shine that renews the ageing classics into one of the best current RPG releases out today.

FF X / X-2 HD Remaster offers a massive amount of content in a fully polished presentation that reminds us of how good RPGs are supposed to play. The updated graphics, character models and soundtrack, along with additional content previously exclusive to the international release, revives these ageing classics into one of the best current RPG releases out today.