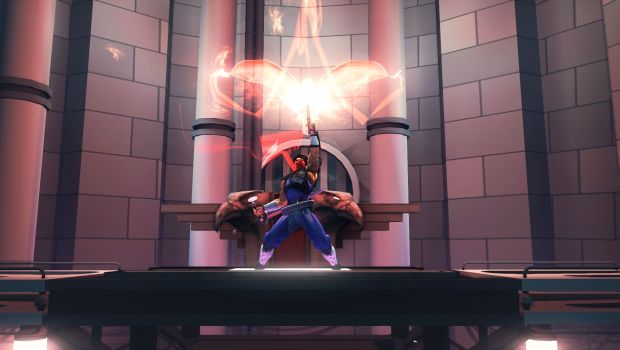 Outside of knowing they’re inevitable, there’s never any telling with remakes. Most of the time it’s safe to assume they will be ambitious, but ultimately rubbish. Awkward, cross-generational, half-breeds where the balance between old and new can’t be found and in the end we wind up with a bunch of compromises no one seemed aware they were making. But for some reason with Strider, I came to it with hope. For some reason I got onboard without as much as a screen shot, bristling with naive certainty that this game wouldn’t disappoint me; and man was I right. Strider is a good game. A very good game. But for a lot of gamers it won’t be good in the way they’d expect.

Any gamer seasoned enough to know “the code” (again, kings to you Wreck It Ralph) honed their adolescent gaming skills playing one or both of a certain kind of game: the platforming side-scroller, or the bullet hell shooter. Whether it was in the arcade or at home, these were the types of games that honed our reflexes, sharpened our instincts, and made our mothers marvel at our unprecedented hand-eye coordination. They were the hallmarks of an era now mournfully found on mothballed eBay pages, headlining sentimental memes, embroidering Hot Topic T-shirts, and where Strider brings new life.

Strider is about the most pure and true remake I’ve ever experienced. From the bottoms of Hiryu’s sandals to the tips of his spiky hair, Strider is peace of meta-nostalgic joy. From the moment you press “Start”, the game literally drops you into the action as if you’d just slid a shiny new token down the throat of an arcade cabinet, anxious to see how far your skills would take you. The stages are entirely two-dimensional, and the platforming equal parts clever and functional. The choices in graphics and design are a testimony to the quality that can be brought to a game made by talented fans for fans, and immerse you immediately with its lush but restrained pallet. Everything moves smooth and seamlessly, even when the action tears across every corner of the screen. And when the false depth of certain stages feels a little disorienting, it only takes a couple of minutes to adjust your perception and remember where Hiryu needs to twirl his Cypher to cut his foes aside.

However, this is only part of what makes Strider’s HD return so impressive. Unashamed of its keytar roots, this game is unabashedly a slice of the 80s. From the pop music to flying across the screen in the grip of an eagle made of lasers, this game is all about over the top and completely unexplainable situations. Strider makes you forget about asking the why’s and how’s that modern gaming conventions thrust upon us (particularly narrative sticklers like me) and instead allow us to just be happy riding the back of an enormous, flying, mechanical, assault drone-carrying, missile-launching dragon because it’s going to look and feel pretty cool when you slash it out of the sky.

The Xbox One Connection
Strider on the Xbox One shows off what the newest hardware on the block is capable of delivering; Native 1080p at a buttery 60 frames per second. The character models are gorgeously rendered with higher-polygon counts than the previous-gen counterparts, and set aglow by a few more lighting bells and whistles. The resolution and framerate helps contain the frantic pace, delivering the eye candy without a single frame lost or screen tear to be found. If high-speed death and Metroid-vania gameplay are your aim, the PlayStation 4, Xbox One, and PC versions of the game will deliver it in its most most beautiful final form.

That being said, depending on what kind of gamer you are, Strider can be pretty unforgiving. The fast paced action and rocket-quick corridor transitions and often make you run headlong into a dead fall or a hazard before you even can realize it. Enemies are relentless, and won’t be shy to take one or a dozen shots at you even when they’re off-screen. A wrong move or sloppy piece of evasion can send you back to your last checkpoint so quickly it’d be safe to call it immediate, especially early in the game when you haven’t done much exploring and the basic Cypher is all Hiryu has in the way of survival. Exploration and doing your best to poke your nose in every corner of the map is very much to your benefit, but comes at the risk of more enemy encounters and considerable loss in progress. Some might find this challenging, but others may find it cheap and frustrating. It’s been a while since the video arcade, and by extension it’s play-style, really had a place in this country, and younger players who are more accustomed to comprehensive designs with equal parts attack and defense may not see the fun in twitch reflexes and insta-death obstacles.

It’s Strider’s merciless characteristics that bring me to my only real complaint about the game, and that’s its inability for you to map your own controls. More specifically, it’s its lack of a D-pad option for controlling Hiryu’s movements. With such high frame-rates and razor thin margins for error, the slop of an analog stick often adds insult to injury. It’s not an overbearing feature (or lack of one), but it was enough for me to consistently wonder if I missed that certain jump or ate that certain laser blast through a fault of my own or because the interface was less precise than I expected. It was a small but irritating thing that soured what was otherwise an entirely garden-fresh experience.

Strider is the kind of remake developers should learn from. Even if you’re planning on taking a franchise in a new direction, it’s always good to have a few titles in the stable that remain true to what made it a classic in the first place. This is one of the those rare times when a game was just made right, and while you have every right to love it or hate it, it’d have nothing to do with how it was made. This is an 80’s videogame power-ballad that hits all the right notes.