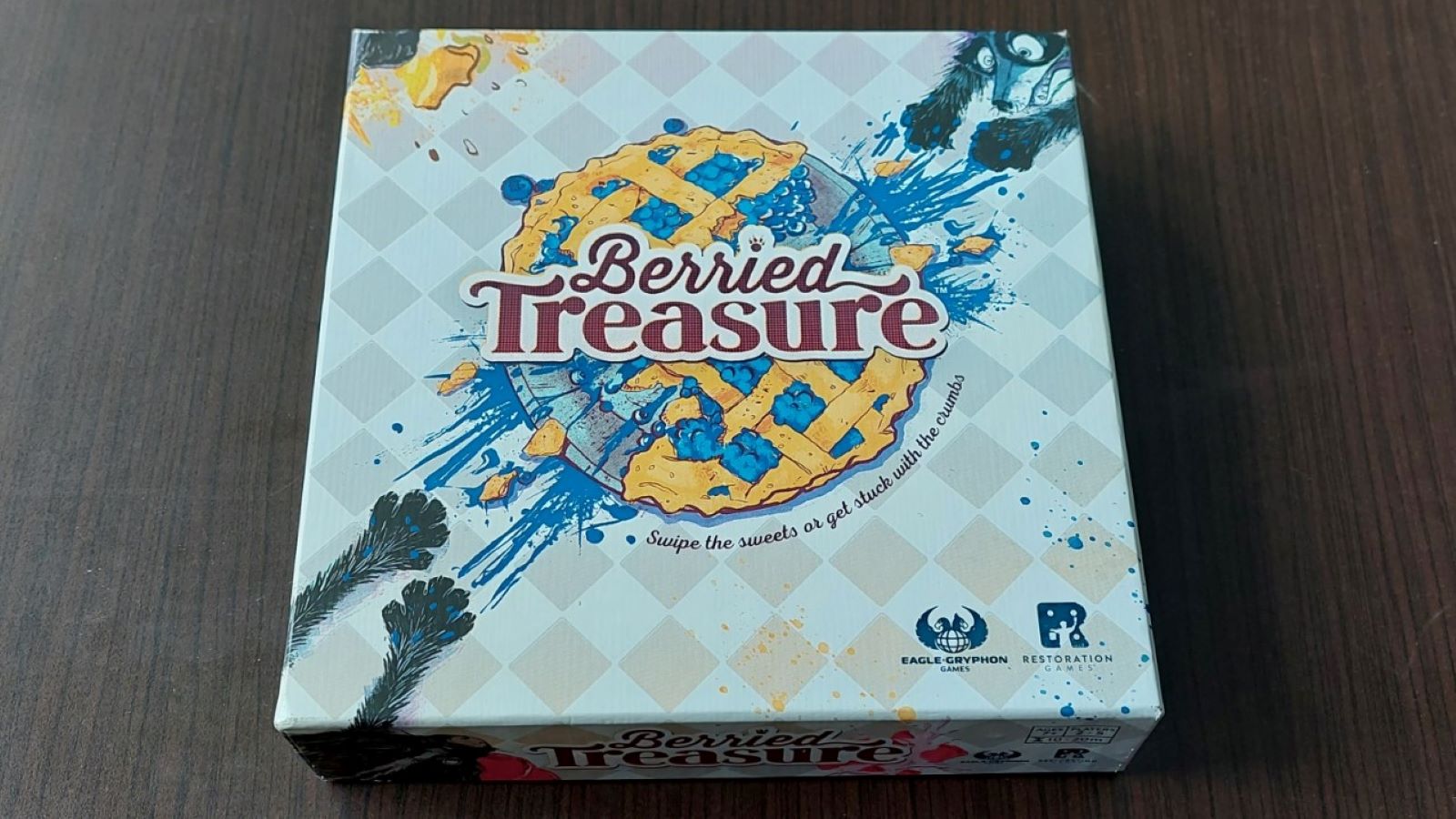 Berried Treasure, a reskin of Buried Treasure from 1992, maintains the enjoyable yet unimpressive experience of the original game with the addition of an adorable theme. 2-5 players act as ravenous rodents who have weaseled their way into an unguarded but well stocked pie shop. Over the course of three rounds lasting a total of 25-45 minutes, players steal and hoard four different types of pie and receive points based on who holds the majority of each type. Anyone who hears this and thinks, “There’s no way this can be bad,” is correct, but Berried Treasure’s grubby greedy paws barely reach further than not bad.

The theme is, by far, the best upgrade Berried Treasure adds. Featured on the box and rulebook are several joyous depictions of rodents tumbling for some sweet, sweet pie, which are depicted throughout the cards as splattered and smashed. My absolute favorite thematic choice is the “grabby paws.” (Shown below.) The adorable shiny new theme combined with the simple rules make Berried Treasure one of the easiest games to get on the table I’ve ever seen. Despite all this, Berried Treasure’s wondrous theme coannt mask the contradictions created by its shallow yet merciless gameplay. 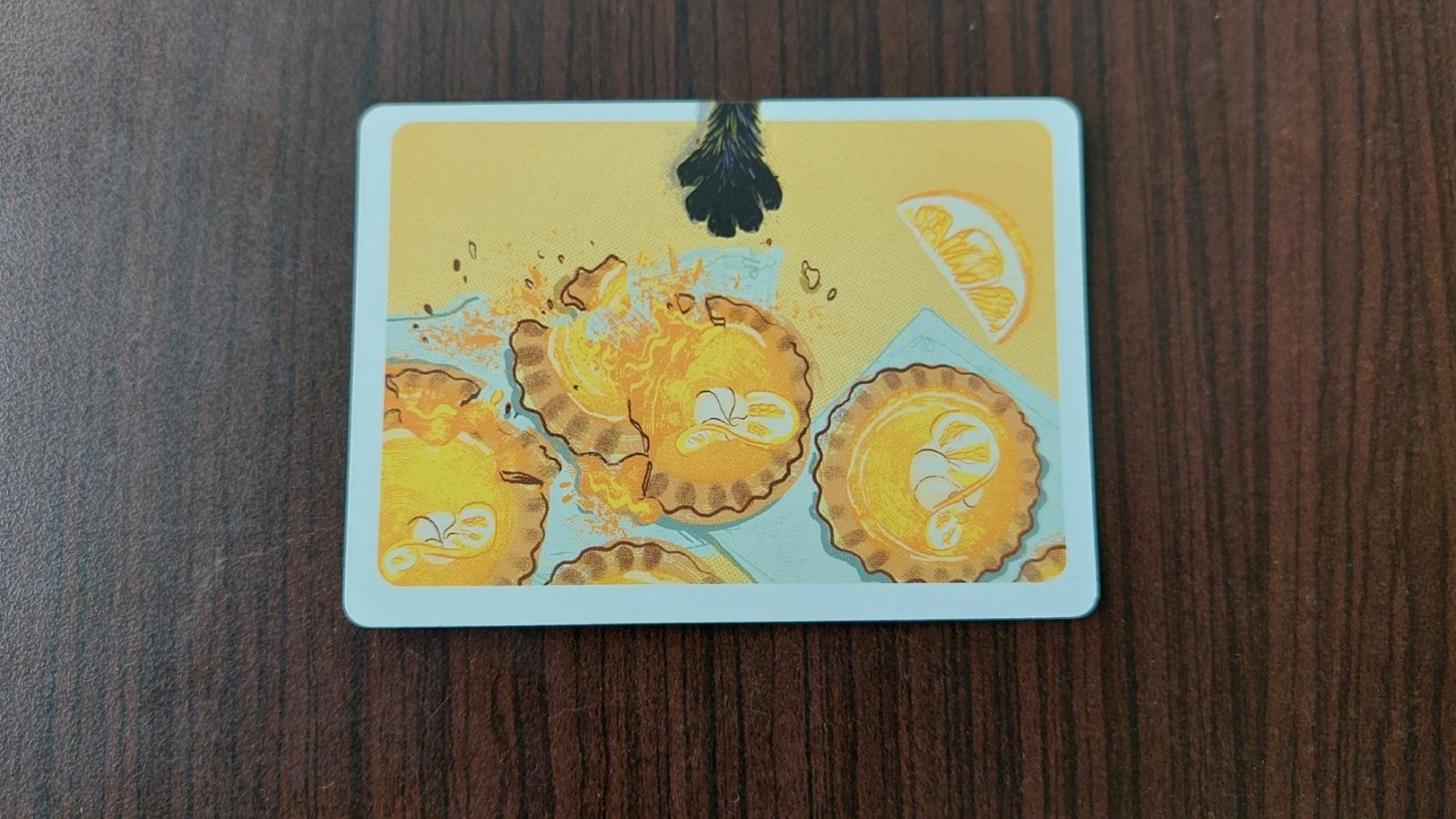 Busting out and explaining this game is lighting fast. To set up, simply shuffle the four score cards and flip one face up. Then, shuffle the pie deck and lay out four face-up columns with 4, 5, 5, and 6 cards in that order to make the “bake rack.” 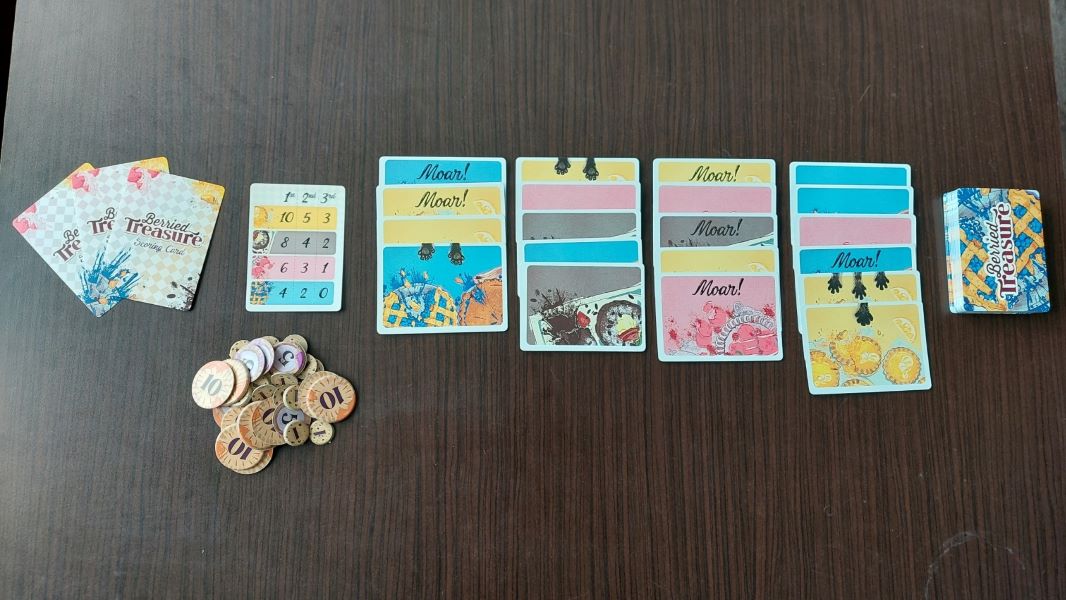 To kick off, The starting player takes one card from the top of the bake rack. If that card says, “Moar,” they may take another card of the same color from the bake rack, ignoring any special effects. Remember those cute “grabby paws?” When a player takes a card featuring these, they may steal 1 to 3 of the same color from one other player depending on the number of paws shown on the card. The grabby paws create some of the most fun moments in the game, especially when someone in the lead gets three cards stolen in a huge swing. Play continues, rotating clockwise, with each player taking a card and resolving any special effects, until the whole bake rack is empty.

When the last pie is gone, the round ends and points are awarded to players according to that round’s scorecard. Whoever has the most of a color wins first place for that color for that round, which could be a whopping 10 points or a measly 4 points. Because each score card is different, scoring first place on the lowest rank color in the first round may only be 4 points, but that color is guaranteed to be worth more in the next two rounds.

After scoring, before the next round begins, the player in last place gets to steal any card from any player, ignoring any special effects. I don’t think this changes the outcome of the game very much, but it does provide a minor satiating vengeance. To start the next round, the next scorecard is flipped over and the bake rack is laid out once again. At the end of the third round, the game is over. Only three of the game’s four scorecards are used, adding variety and chance to each game. And that’s the whole game! Well… except for the most important part.

Here’s the big kicker that makes this game interesting, players who are tied for a color are considered to have none of that color for scoring. This mechanic is the crux of decision making in Berried Treasure. For example, if stealing from the player with the most yellow would make you tie with them, it would likely be better for you to steal from someone else if possible. 2nd place is better than no place. This leads to some very fun interactions of, “Steal from them!,” “No, steal from them, they’re winning!,” “AAAHHHH!” Figuring out whether to do what’s best for you or worse for the person in the lead is kinda fun… at first. This is where my praise ends and gripes begin. 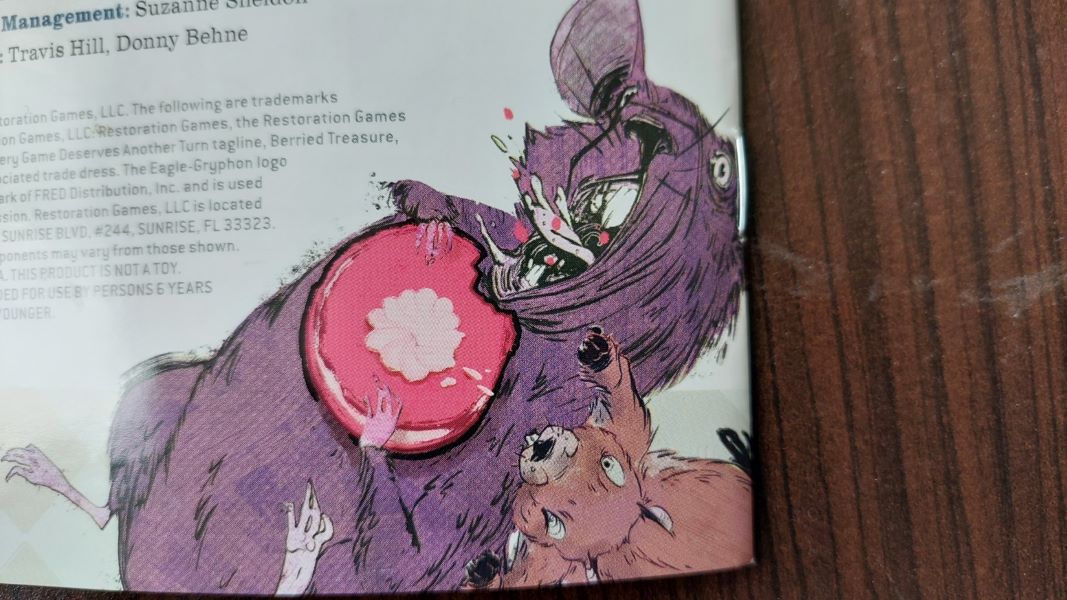 The last thing I would call this game is fair. The stealing combined with the tie rule can lead to situations where someone who isn’t winning gets stolen from. Most likely, when someone gains an overwhelming lead of one type of color (which is hard to do but it still always happens), they can’t be challenged. This usually leads to games where the player in first place scores in the high 30’s to mid 40’s while the player in last gets around 15 to 20 points. In addition, the simplicity of this game combined with the very limited choices quickly leads to situations where every player is fully competent, usually after the first round. When every player makes the optimal decision every turn, the outcome of the game is almost entirely determined by how the cards fall. This grows increasingly obvious as the end of the game draws near.

Fortunately, tactics seem to carry slightly more weight in the two player variant. Yup, Berried treasure also has a two player variant! The bake rack is 3, 4, 5, 4, 3 and each player takes cards from the side of the rack closest to them. “Moar” cards let players take a card from their opponent’s side. Decisions  matter more here, but the cards still primarily hold the deterministic reigns. Additionally, the two player variant removes the drama of stealing as you always know who you are going to steal from. Berried Treasure is meh as a two player game, but also it doesn’t need to exist. Just play one of the several fantastic dedicated two player games.

Unfortunately, Berried treasure doesn’t perform any better in other scenarios either. The simplicity and cuteness of this game might make you think it’s suitable for kids, yet, I can easily see how the stealing and lack of control could fester hard feelings in the youngins. Also, the disappointing lack of depth means this game doesn’t suit adults either, at least not sober ones. Even so, there are a plethora of better games for adults, intoxicated or not. If you have nostalgic feelings for the original Buried Treasure, then maybe pick this up. I do enjoy grabby paws and smashed berries over swords and booty (not the fun kind).

Art good. Aside from that, I have one small issue with Berried Treasure’s production. The box is way too big! It could easily be one third or one fourth as big. 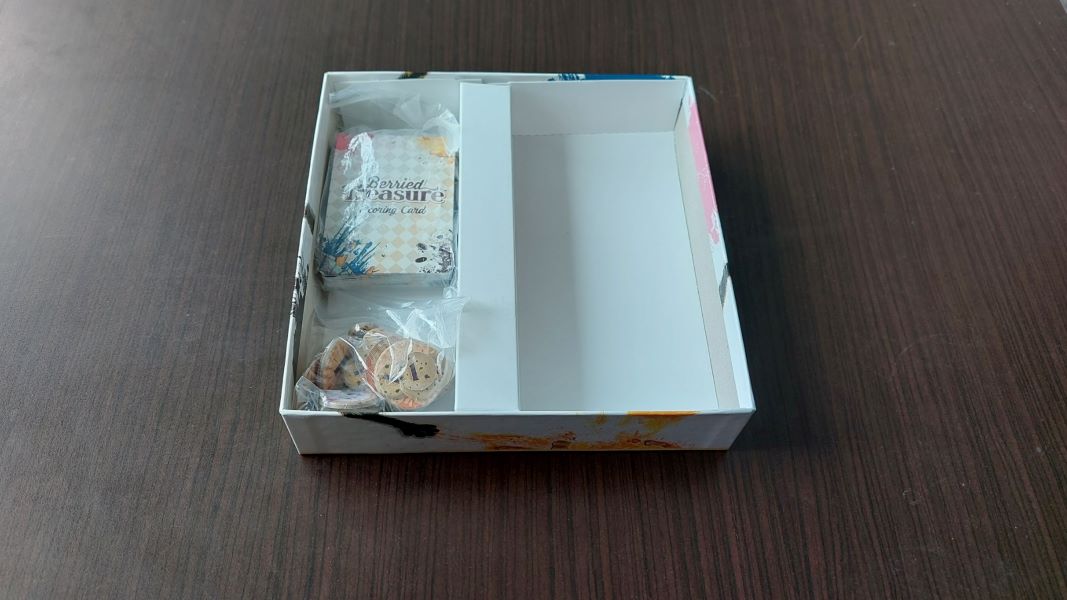 Berried Treasure is an assuredly enjoyable experience with an adorable and fun theme which scrambles onto the table with ease. It’s quick to teach, fun to play, and doesn't overstay its welcome. But, there are no situations I can think of where I would recommend this game over any other.

Ellis is a fledgling table top hobbyist with a passion for finding and sharing novel experiences. Always on the hunt for a good laugh or competition, Ellis hopes to draw deserved attention towards any conduit of positive memories, small enough to fit on a table.
Related Articles: Berried Treasure, Tabletop
Share
Tweet
Share
Submit