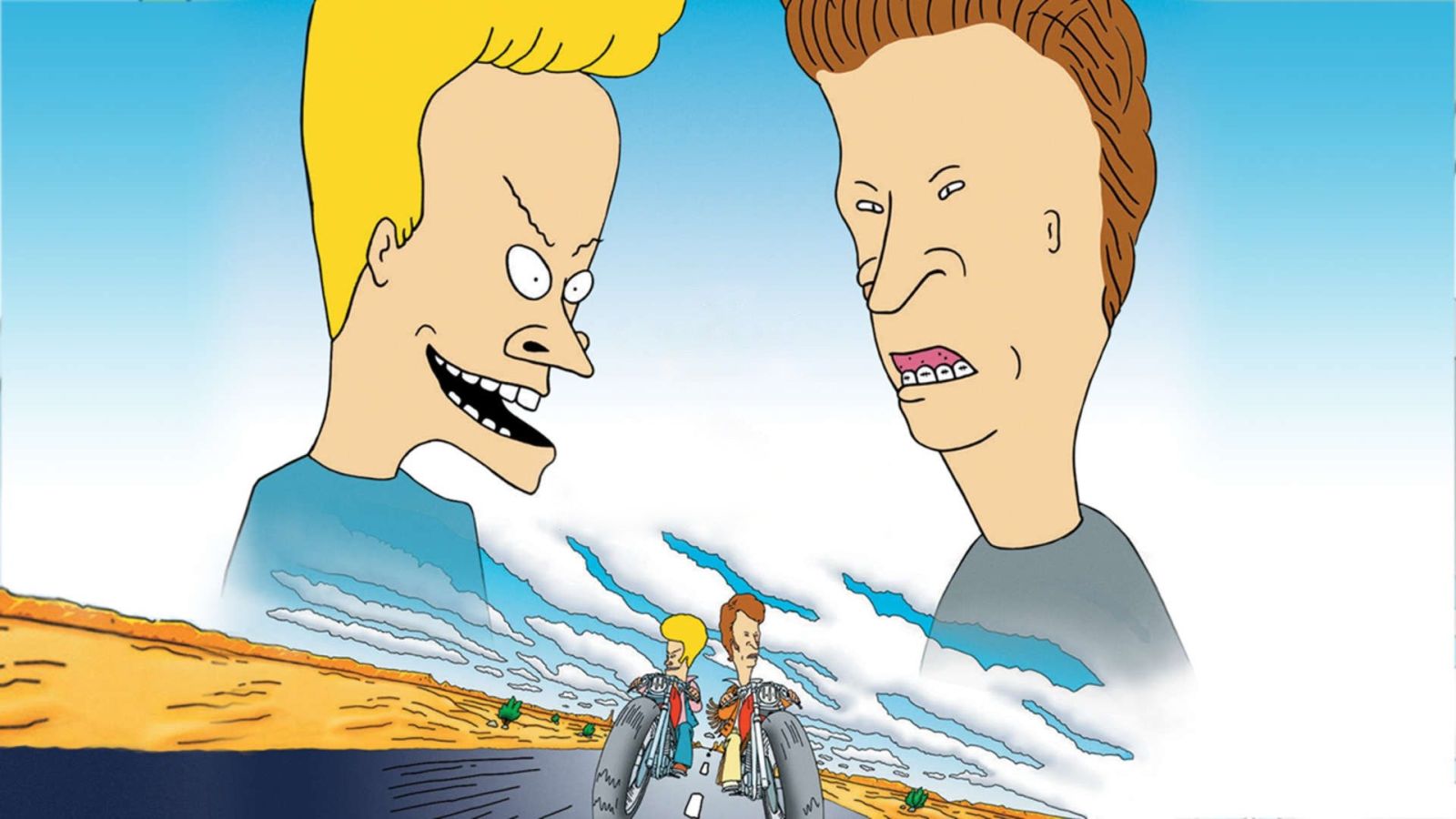 I went to the theater and settled into the uncomfortable seat, the sticky crunch of who-knows-what sticking to my shoes. Mike Judge treated me to 81 minutes of low-brow awesomeness, complete with music tracks from the likes of the Red Hot Chili Peppers, White Zombie, Ozzy Osbourne, AC/DC, No Doubt, and even Mr. Van Driessen’s rendition of Lesbian Seagull. To my 20 year old semi-adolescent brain, Beavis and Butt-Head Do America was hilariously stupid and I loved every minute of it. Now, 25 years later, we’ve got a chance to see a fully remastered version of this gripping story in 1080p with 24-bit 48kHz DTS-HD 5.1 surround sound. Will that bring the story to life in a magical new way? Hell no, but let’s watch it anyway. 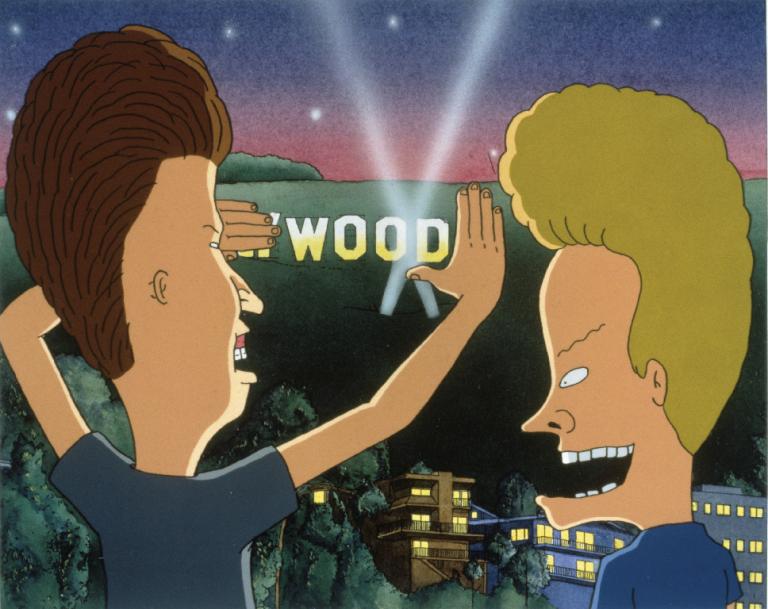 Beavis and Butt-Head tells the story of the show’s titular MTV-loving/hating junkies awakening to find that their TV has been stolen. Undeterred by just how much that sucks, they head down the street to a local rent-by-the-hour motel where they plan to score one of the TVs that reside in every room. In true B&B fashion, they stumble into the middle of a murder-for-hire plot as local scumbag Muddy Grimes tries to hire them to “do his wife” in Las Vegas in exchange for $10,000. They set off on a whirlwind tour of America as they set off to Sin City to score, collect their cash, and then head home to buy a new TV. Everything goes exactly according to plan without any deviations whatsoever, the end, right? Yeah, not exactly. The pair end up wrapped up in all sorts of hijinks, end up the subject of a manhunt, and even run afoul of the secret service! It’s the show on steroids, so you know exactly what you are getting into here. 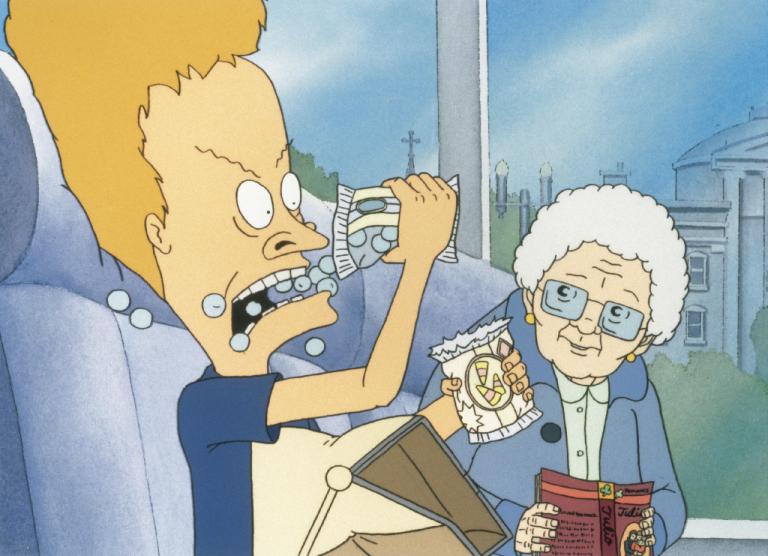 In the 90s, nobody was shooting on digital cameras, not even James Cameron and George Lucas — their first digital movies came in the early 2000s. That means that Beavis and Butt-Head Do America was shot on film with hand-painted cells. Well, somebody at MTV, Geffen, or Paramount held onto those reels because they’ve been remastered into digital 1080p at 1.85:1 ratio (widescreen, slightly wider than standard 16:9) and it looks gorgeous for the effort. The hand-drawn artwork is purposely janky, but it’s clear, clean, and color corrected to be good or better than it did back in 1996. 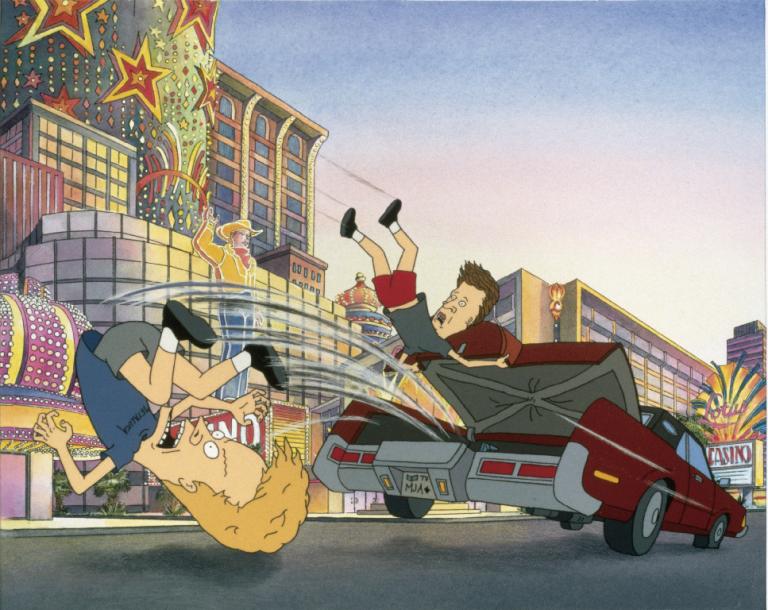 I own the 10th Anniversary of this movie on DVD, and it already had a pretty solid 5.1 surround sound mix that prioritized center channel to bring the audio work of the likes of Demi Moore, Bruce Willis, Cloris Leachman, Robert Stack, Eric Bogosian, John Doman, David Letterman, and more perfectly. Here we see that punched up to a reference 24-bit 48kHz DTS-HD 5.1 mix, which you’ll hear more clearly during the various musical scenes in the film. If you wanted to hear Rollercoaster belted out by the Red Hot Chili Peppers in the best possible mix while the iconic duo do the ass-smacking dance in a Vegas casino, this is the way to do it. 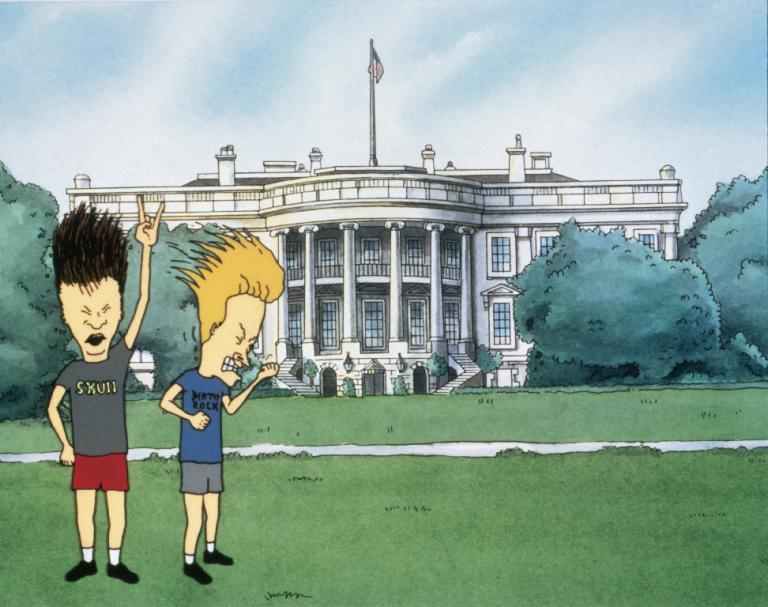 There are only a handful of bonus items, and if you’ve got the previous DVD version of the movie, you’ve seen them all as they are the same bonuses. Thankfully they juiced up the image quality on these as well as they were pretty muddy before, but it’s kinda sad that they couldn’t get Mike Judge in a booth to talk about his creation now 25 years later. 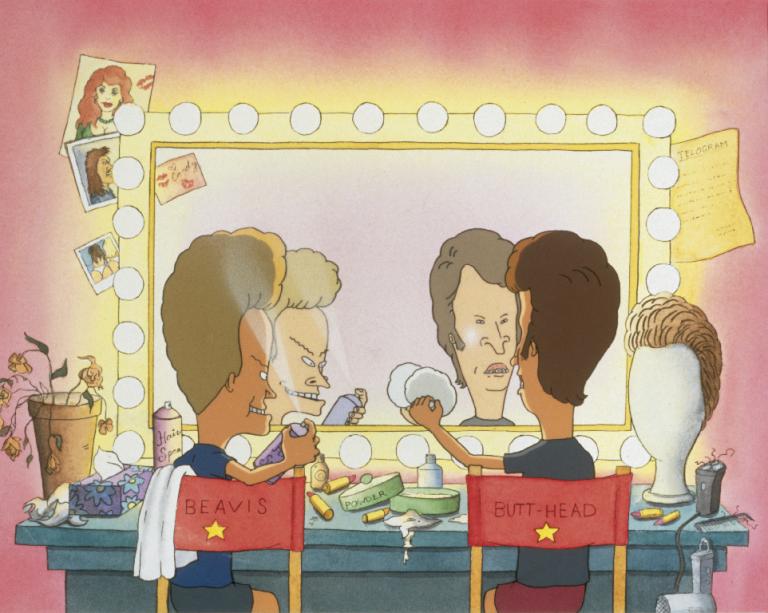 The first bonus feature is a commentary with Yvette Kaplan, the Director of the film, and Mike Judge, the creator of the series and primary writer for the movie. It’s fun watching Mike slip into his various characters, making it worth a watch for that alone. The second item is called The Big Picture. In this making-of segment we get a behind-the-scenes look at the story, voice casting, and even an extended version of the Rob Zombie-inspired crazy desert hallucination scene. We’re Gonna Score! is another behind-the-scenes on how Composer John Frizzell came up with the various music used throughout the film. The Smackdown is certainly unique as it’s just sequence after sequence of various characters in the movie getting their ass kicked. MTV News (remember them?) drags the likes of Snoop Dogg and Jennifer Tilly in front of the camera to talk about Beavis and Butt-Head, though this is more a fun look back at a time long past when Music Television actually played music. I digress, but I’m old — I do that. The last two things on the disc are TV spots and the original Trailers for the film, which incidentally were put on a little fledgling platform called “YouTube” that nobody had really heard of at the time.

I was a little sad to see that the only deleted scene that we know of, in which Beavis literally steals the Declaration of Independence to use as “T.P. for his bunghole”, walking back to the bus with a scrap stuck to his shoe. If you want to see it for yourself, and if you’d like to see what this movie looked like before its transition to BluRay, it’s worth a watch, which you can do right here:

This film was the culmination of some of the best animated content MTV has ever had on offer. Other shows have tried and failed to recapture the magic, meanwhile Mike Judge has delivered hilarious hit after hit. Best of all, he’s bringing more our way very soon, but who better to tell you about it than these lovable idiots themselves.

An Announcement from Beavis and Butt-Head

Ron Burke is the Editor in Chief for Gaming Trend. Currently living in Fort Worth, Texas, Ron is an old-school gamer who enjoys CRPGs, action/adventure, platformers, music games, and has recently gotten into tabletop gaming. Ron is also a fourth degree black belt, with a Master's rank in Matsumura Seito Shōrin-ryū, Moo Duk Kwan Tang Soo Do, Universal Tang Soo Do Alliance, and International Tang Soo Do Federation. He also holds ranks in several other styles in his search to be a well-rounded fighter. Ron has been married to Gaming Trend Editor, Laura Burke, for 21 years. They have three dogs - Pazuzu (Irish Terrier), Atë, and Calliope (both Australian Kelpie/Pit Bull mixes).
Related Articles: Beavis and Butt-Head Do America
Share
Tweet
Share
Submit