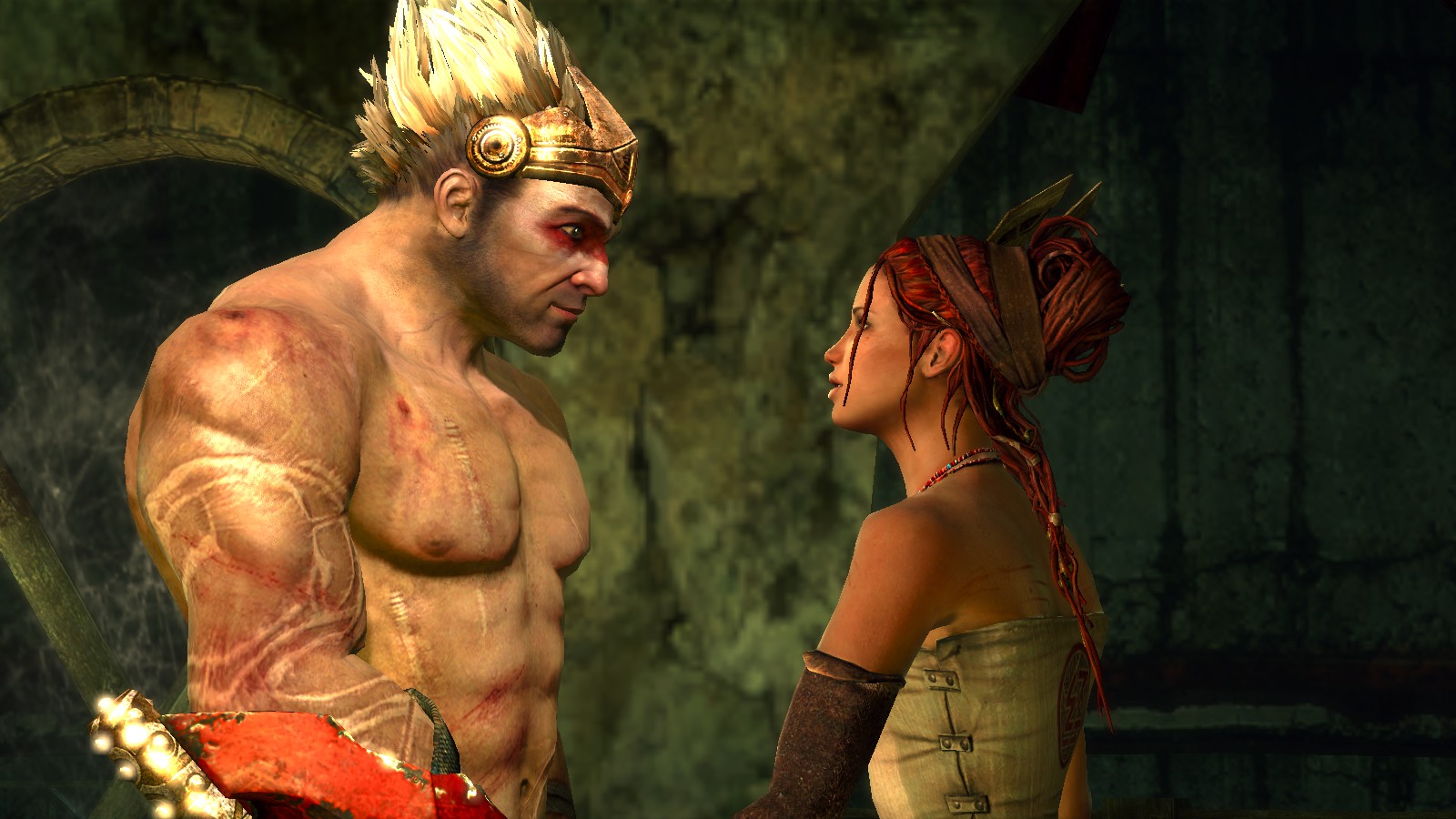 There’s something special about a good B movie. You know the type–that kind of hugely ambitious movie that clearly escaped the director’s control. That brilliant flick where the budget clearly ran dry and left the director to try and piece together his vision with nothing but plungers, handheld camcorders, and duct tape. Enslaved: Odyssey to the West, a 2010 console outing by Cambridge-based studio Ninja Theory was essentially the video game version of a solid B movie. Its brilliant successes are matched only by it’s colossal failures, but now we have the chance to see how it fares on the PC.

I’m sorry to report that it doesn’t fare very well. Namco-Bandai has a bit of a history of lackluster ports–I’m looking at you, Dark Souls–but Enslaved has to be one of the worst I can remember. How bad is it? Graphics options are limited to “Resolution” and “Gamma.” In order to do something as simple as activate v-sync–and trust me, with the amount ot screen tearing you’ll see you do want v-sync–I had to manually flip it in the engine’s .ini files. But that’s not the worst bit. Not by a long shot. What could be worse, you ask? What if I told you that the menu screens can’t be navigated with a mouse? I hope you have a gamepad, because otherwise you’ll be reaching for the old Up-Down-Left-Right. Mods should improve the port in the coming months, but it’s still a damn shame that the community has to do what should have been handled by Ninja Theory or Namco-Bandai’s QA department.[singlepic id=17170 w=620 h=350 float=]

Still, I guess I can’t be too mad about it–after three years I’d given up hope of ever seeing a PC copy of Enslaved. It has its share of flaws–maybe more than its share–but there is a lot to love. The story is a clever reimagining of the classic Chinese tale Journey to the West (some readers may know it as Monkey) transported to the mech-filled remnants of a bombed-out USA. The player controls Monkey (Andy Serkis), a hulking bruiser with a heart of gold, as he guides and protects the young Trip (Lindsey Shaw) back to her home. Together the pair will traverse a crumbling New York, scale massive metal hulks in what was once the Heartland, and maybe even bring enlightenment in the western deserts.

The star of the show here is the interaction between Monkey and Trip. Enslaved is one of the best written stories I can remember playing, mixing just the right amounts of pathos and humor. The fantastic script is only elevated by top-notch performances from Serkis and Shaw, who bring an incredible chemistry to their performances. And just when you get tired of Trip and Monkey you get to meet Pigsy (Richard Ridings), a porcine slob who is nearly as revolting as he is hilarious. From the moment he is introduced, Pigsy’s bumbling antics and cocksure arrogance win him the spotlight in nearly every scene. He even gets his own short campaign as a bonus, if the main plot doesn’t satisfy your pork craving.

I know you probably tuned out the moment you realized I was dancing around the words “post apocalyptic,” but hear me out! Look at the screenshots–Enslaved isn’t your average grey-brown dust bowl. The world Monkey and Trip share is lush and vibrant, full of brilliant red leaves and green grasses. Environments–especially the early scenes in New York–have such a wonderfully cohesive aesthetic and sense of scale that you’ll be willing to forgive Enslaved its flaws.

Which is good, because there’s plenty to forgive. Enslaved’s performance was lousy on consoles and the transition to PC has not done Ninja Theory any favors. Even after manually enabling v-sync, I had issues with screen tearing. Manually disabling motion blur smoothed out the framerate, but I still found enslaved chugging along in the mid 20s from time to time. Audio and video came uncoupled in more than few cutscenes along the way, really distracting from the excellent performances.[singlepic id=17169 w=620 h=350 float=]

Then there’s the gameplay. It’s not that Enslaved is bad, per se, it just lacks complexity. The combat system will force you to rely on a simple four-button combo to put damage, and that’s pretty much all there is to it. The oft-repeated post-combat dramatic zooms are cool the first time, but you’ll probably grow to hate them in the 8 hours it will take you to beat Enslaved. From time to time you’ll have to use Monkey’s staff as a kind of rifle in lackluster pop ‘n drop shooter segments, but in all honesty, the less said about those the better. Enslaved’s platforming isn’t really any more complex–find the blinking pipe or ledge, press the stick towards it, and tap the action button. Lacking any real challenge and requiring very little effort, platforming bits are carried by the amazing vistas and set design, more than by solid gameplay.

It’s difficult to settle on any kind of final rating for Enslaved because it contradicts itself so damn much. On the one hand the graphics are buggy, the core gameplay lacks complexity, and the PC port is underwhelming at best. On the other hand, the things that Enslaved does well–story, setting, characters, and art design–it does better than damn near any game I can remember playing. Your enjoyment of Enslaved will essentially come down to how much emphasis you place on these different aspects. Gamers that need perfectly optimized, AAA experiences and complex, rewarding gameplay are probably not going to find what they need here. The rest of us? We’ll settle in and enjoy Enslaved for what it is: a flawed but ambitious B movie.[singlepic id=17168 w=620 h=350 float=]

Enslaved is as ambitious as it is flawed. Those of you who can put up with mediocre gameplay and a lack of polish will find a touching, rewarding story heightened by top-notch cast performances. Others need not apply.