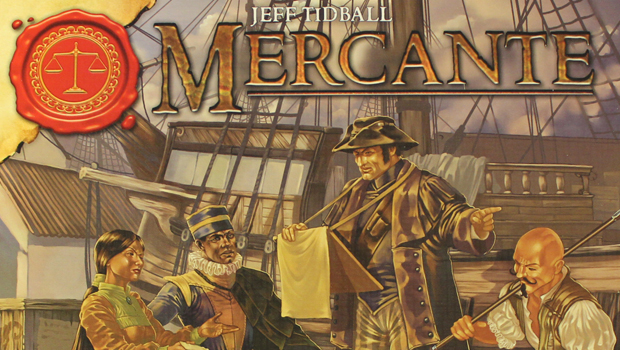 Every city consumes, processes and generates goods in some way; The city of Tempest is no different. The good people of the city need their coffee and wine. Artists need to sell their work. And most importantly, everyone loves bacon. You, being the entrepreneur you are, don’t hesitate to capitalize on such a vibrant economy of crowns and commodities. Do you have the prowess to know when to buy and when to sell? Are you going to be able to fulfil enough contracts to rise to the top? Lets find out in Mercante.

Sitting in the number two spot of the Tempest series, Mercante has the players pursuing goods and making a profit in the port district of the city. Having very little relation to Courtier or Love Letter, Mercante is a medium-heavy economic game with plentiful bidding for goods. There is not a ton of theme beyond that, so lets see how the game is played.

The auction of goods sits in the center of gameplay for Mercante. At the start of their turn, a player selects one shipment of goods from a pool of five available cards. These shipment cards are generally made up of multiple goods that have the option of being sold individually or as a collected set. Starting with the person to the right of the active player, everyone gets one single chance to make an offer, with the active player having the final bid. The winner pays the bank and takes the goods into their warehouse.

After the shipment has been auctioned off, the active player assigns their workers to actions on their player board. Several actions can be taken, but the most important is the hiring of dockhands (also known as: lets move these goods and make bank), which we will get to below. Some other actions include: hiring more workers, building additional warehouse space, collecting contracts, and buying victory points. The cost to buy victory points and hire workers is on a sliding scale that moves whenever one of the two is bought. At the start of the game, victory points cost very little, and workers are prohibitively expensive. Nearing the end of the game, this dynamic swaps, and victory points become spendy and workers are cheap.

There are four different ‘classes’ of goods in the game: foodstuffs, raw materials, trade goods, and luxury items. Each category has four distinct goods, making sixteen total unique goods in the game. The value of each good is determined by the market board. The first item sold to a market fetches a higher price than goods sold after. The luxury items start at twenty crowns and fall quickly to ten; on the flip side, the foodstuffs market starts at ten crowns and gradually levels off at five crowns. When a sale is made, the goods token is placed on the market board to show the current value of that market. In addition to the market board, event cards may modify the selling price of a good. These event cards come out randomly during the game in addition to being played as reactions by cunning opponents. 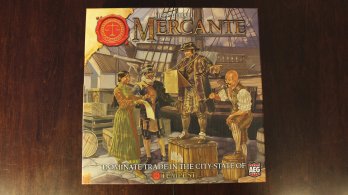 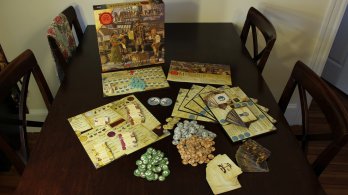 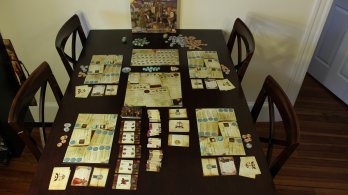 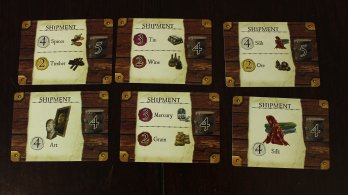 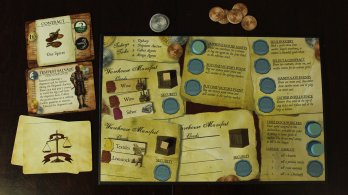 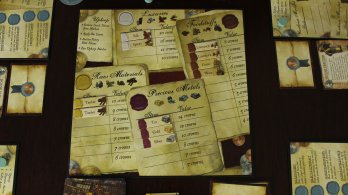 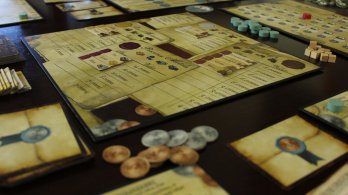 Each player takes on an identity as a merchant house, providing some special perk. These player powers alter what strategies are viable at any given time. In addition to this, players interact with event cards which change the value of a market or good, change the goods in warehouses or effecting the shipments.

The game ends when one of three events trigger: a player amasses 80 or more crowns, the victory point/worker cost track reaches its end, or the last shipment card is drawn. The current player finishes their turn, then all players sell their goods at a steep loss. Crowns can then buy end game victory points and players calculate their score. Whoever has collected the most victory points is declared the most successful merchant, and winner.

When I first opened the box for Mercante, I was surprised to find a much more interesting looking game than any other in the Tempest line that I have played. It has stacks of coins, goods and victory points, accompanied by three different decks and individual player boards. The graphic design of the game is a noticeable step up from the other games. The central market board looks like a handwritten ledger, the player boards look as if they are a messy desk full of paperwork. The art is functional and component quality is great. To top it off, the box comes with a somewhat useful insert to hold all of the cardboard.

Learning the game took a little bit of effort as there are a lot of moving parts. The rule book lays out the game in a very logical order and provides many useful examples. Mercante is fairly easy to teach to new players, but it takes some time to get a feel for the value of goods and money.

As the auction mechanic is most pronounced with five players, I prefer to play with four or five. As players are always involved in the game, someone needs to keep things moving along, or it can get bogged down with the higher numbers. Games took about the same amount of time regardless of the number of players. This means that with more players, each individual plays a little less.

Mercante has it all: variable player powers, auctions (both blind and in turn), hidden goals, action selection and five different shifting markets. All of these mechanisms blend smoothly into an enjoyable player experience. Each player’s turn is manageable, and for the most part, involves all of the players at the table. The central mechanism is, for sure, the auction of goods; but like an aged cheese paired with a fine wine, the rest of the game complements the bidding well.

Following in the footsteps of other Tempest games, Mercante is light on the theme. It has more going on for it than the other Tempest games I have played, but still it could use a little more. Interestingly, people I played with augmented the game with their own thematic elements. As shipments came in people would make up names for the ship based on the goods delivered. Sometimes even going beyond and coming up with a backstory for the ships crew.

The lack of theme may be influenced by the pure mathematical design of Mercante. Taking a step back after a few plays, it is clear how much planning went in to the values and numbers of the goods. Each type of good comes out exactly as many times as other goods in the same tier. Each good is distributed evenly in the contract cards. This mathematical completeness does not help with the theme, but surely is part of what make the game so balanced.

Like most auction games, it is important for players to know the game value of what they are bidding on. This can be a little tricky to figure out, especially as there are multiple paths to victory points. At the end of the game victory points can be bought for ten crowns. At the start of the game they can be purchased for one crown. Completing contacts can also award victory points. On top of the value of victory points, players need to make money, so they need to know how much profit the can make by selling the goods. Some people may be drooling over this kind of optimization, yet I know some people find this kind of game rather unwieldy. Either way, it makes the first play difficult and possibly frustrating.

Being a merchant in the city of Tempest can be rough. Mercante is on the kick-you-while-you-are-down side of the forgiveness scale. If you over bid too many times, you are going to see your opponents quickly outpace you. There is not a lot of room for catch up, and very little you can do about someone who is doing everything right.

The greatest strength of Mercante is the breadth of strategy. As previously stated, there is more than one way to achieve victory points. Players can focus entirely on making money. With ending scores generally falling around ten victory points, a player that is able to force the game to end with 80 crowns (end then buy eight victory points) is in a good position to win. Yet a player can also focus on contracts for their source of income and victory points. Completing four or five of them gets up up to winning potential. Don’t forget about buying points during the game! As the game progresses the viability of each of these strategies rapidly changes; thus the winner is usually the player who is able to balance cash flow with contract fulfillment.

With trim and neat gameplay, Mercante offers a look into a deep economics market while still staying playable and fun. Not for newcomers to the hobby, Mercante is best played with gamers who are able to fully understand all of the actions in the game. There was a distinct change of enjoyment from my regular gaming group, who loved it, to some of my not-so-game-intense friends, who felt a little overwhelmed. It is not the most accessible game out there. Regardless, Mercante is shaping up to be my favorite of the Tempest line. For those who are interested, I recommend checking it out.