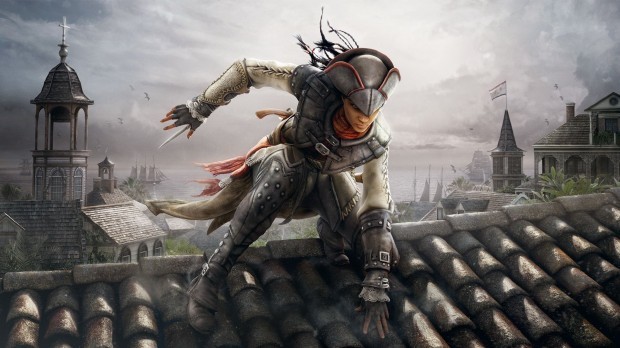 Liberation HD follows the story of Aveline, a woman of African and European descent and finds herself torn between two conflicting worlds in the days of colonized America. Aveline utilizes different personas to navigate various social  hierarchies, including a slave persona for blending in with the African-American community, and a high-class woman persona for mingling with the upper-class. Aveline’s strong character and the interesting setting that she finds herself in are Liberation HD’s strong suit, but are unfortunately overshadowed by glaring issues with almost every other aspect of the title.

The Vita version of Liberation was never going to pass for the excellent presentation that can be found in Ubisoft’s more recent Assassin’s Creed entries, but with an HD face lift Ubisoft aimed to bring a more pretty experience to console users. Unfortunately Assassin’s Creed Liberation HD falls far short of achieving that goal. Although many environments look okay at a distance, particularly the bird’s eye shots of New Orleans, most of the time you’ll find yourself staring at blurry faces and sub-par environments. The attempt to improve the Vita version’s presentation instead only serves to highlight the graphical issues on a larger screen.

The sound of Assassin’s Creed Liberation HD is all over the place, as most of the music and sound effects from combat are what you’d expect from an Assassin’s Creed title, but some of the sound (namely the voice acting) is irredeemably terrible. Every character has an annoying accent of one kind or another that range from the bothersome to those that feel intentionally farcical. Every Assassin’s Creed game so far has had a plethora of accents of one kind or another, but in Liberation they’re downright terrible. I found myself unable to concentrate on the story or what I was supposed to be doing due to the distracting and silly voice acting.

Once you’re done talking to the characters and begin playing the game however, the real problems begin. Assassin’s Creed Liberation HD is by far the most buggy entry so far, as enemy AI wanders around aimlessly, unable to find you in plain view during stealth missions or figure out how to get to you once they’ve given chase. The free-running glitches that have been an issue in every Assassin’s Creed title are even worse here, as players will find themselves randomly scaling walls or jumping off of cliffs in higher numbers than in previous entries.

The missions in Liberation HD consist mostly of getting from one place to another, which I never found fun on the Vita version to begin with, but on the big screen it’s even more difficult to bear. Whether you’re tailing someone or sneaking into an area, you’re basically just following a linear path for a painfully long time until you arrive at the next cutscene. Then there’s some fighting or maybe some climbing, and you rinse and repeat. The combat is simplified compared to other titles and has more in common with the first Assassin’s Creed game than than it does Assassin’s Creed IV, which means that it gets boring fast.

Most annoying of all though, are the lack of checkpoints during missions, which means that if a random free-run hiccup causes you to jump off the wrong ledge, then you have to start from the beginning again. The only thing worse than the painfully long tailing objectives is being spotted ten minutes in and having to repeat it from the beginning.

Overall, Assassin's Creed Liberation looks and feels like a cheap knock-off of the series, and almost every aspect feels like a dumbed-down version of what players have come to expect from the series. While Liberation may have been impressive for a handheld device, the console port serves only to draw attention to the title's flaws. At a $20 price tag, I'd advise that players save their money for Assassin's Creed IV DLC instead.