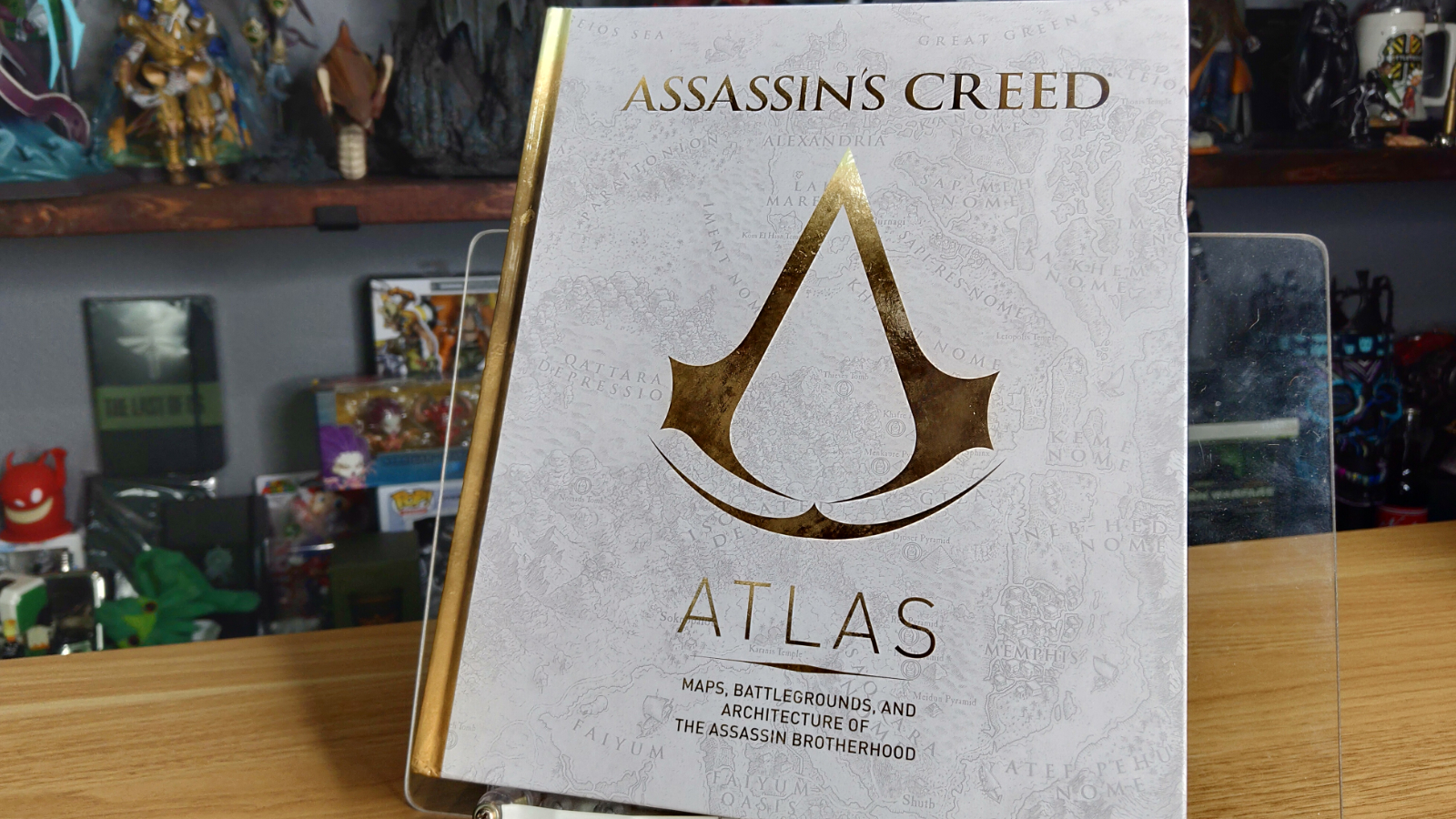 It’d take the quickest of glances at my bookshelf (or the amazing Assassin’s Creed: Brotherhood of Venice board game) to know I’m fairly obsessed with the Assassin’s Creed series. From art books to collector’s editions of the games, the series has always been rich with amazing storylines in the most iconic locations around the globe. Well, the team at Abrams Books agreed, teaming up with Ubisoft Historian and Director of Content for Ubisoft Montreal Maxime Durand, Ubisoft International Brand Manager Guillaume Delalande, and Ubisoft Artistic Brand Director Raphael Lacoste to take us through these historic sites that brought our favorite games to life.

Unlike the first game, which started in the Middle East, this book starts off in Europe — namely Greece. Right out of the gate we see some of the most famous statues in antiquity that you can still see today — that of the legendary King of Sparta, Leonidas, and the fabled chryselephantine statue of Athena Parthenos and her fabled shield inside. While there is a great deal of awesome artwork in this book, seeing the real-world statues and structures is a real treat. 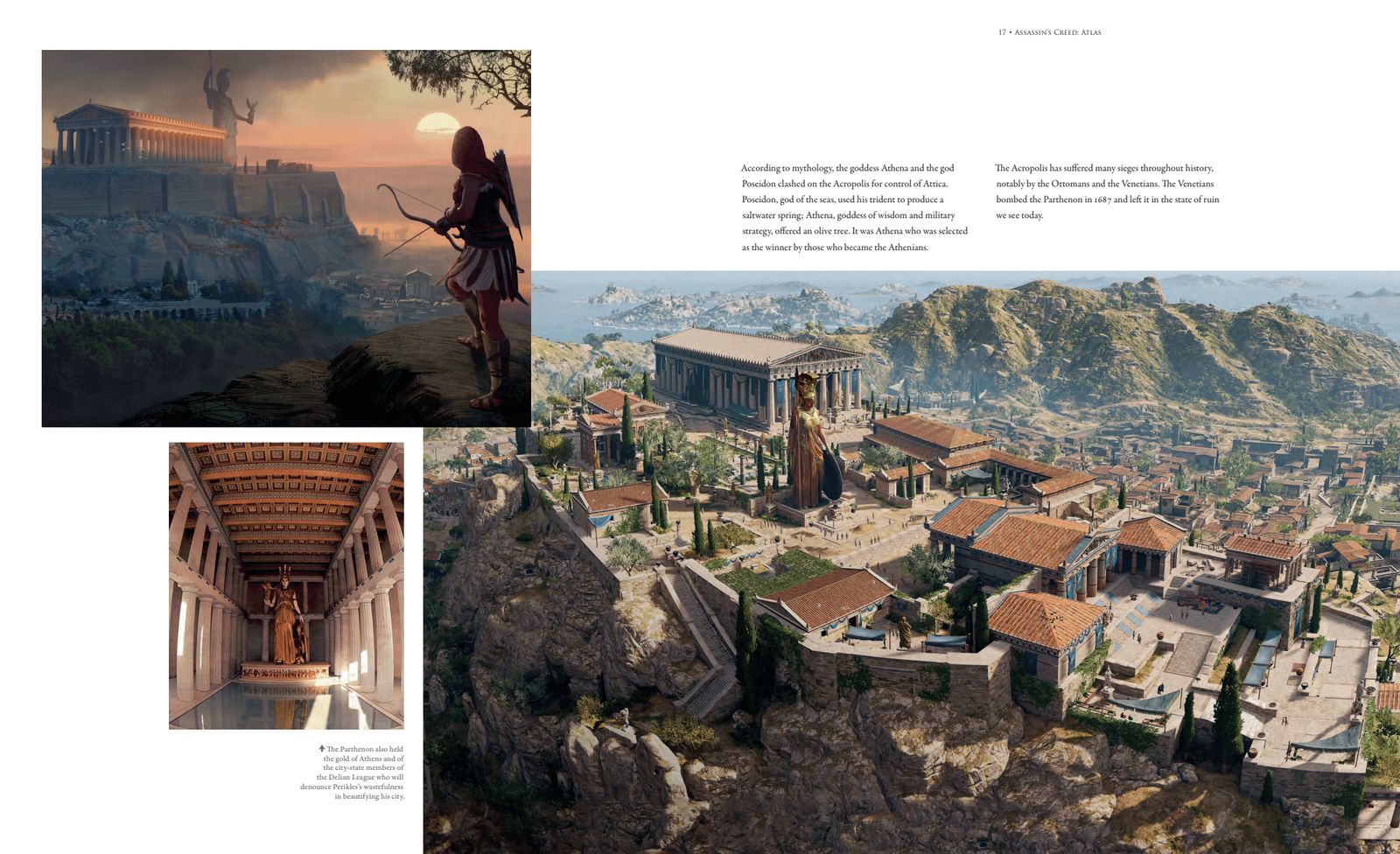 Naturally, the team behind Assassin’s Creed also had to bring to life things that have long since fallen to the ravages of war, invasion, and time. Places like the Oracle of Delphi, Alexandria, Fortress of Masyaf (better known as Masyad Castle), and Cyrene have long since passed from this world, but where they once lived, and how they might have looked are well represented here.

One of the surprises in the book is the inclusion of one of the lesser known offshoots — Assassin’s Creed Chronicles. Russia, China, and India get their own brief section, as does a short section about trains, since we’ve had a few fights on top of them. These three side scrolling offshoots are a fun romp in the Assassin’s Creed world, but in a whole new way. I’m glad they’ve made an appearance here. 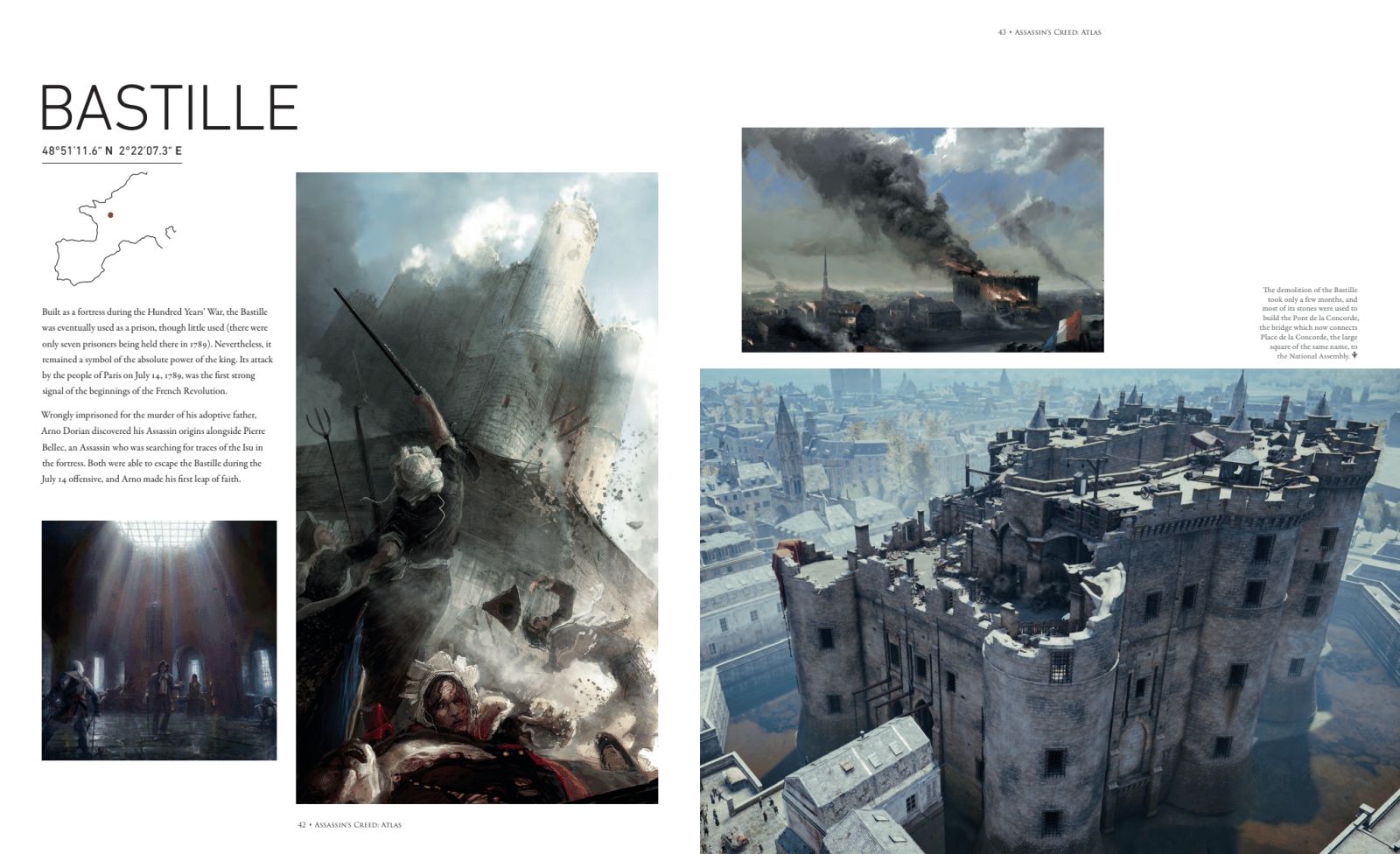 There is one section of the Atlas that puts a smile on my face — a return to the city of Acre, one of the primary settings of the first game. This archipelago port city in modern Israel is over 4000 years old, giving us all a glimpse into a past so long ago that it’s hard to even imagine. The fact that it has survived to this day is a testament to the original construction, as well as the incredible work of preservationists of today.

I’ve only one complaint with this magnificent book, and that’s the Americas section. With a focus on pirate strongholds like Nassau, the British colonial capital of Kingston, and the Cuban capital of Havana, I’d hoped for more on these historic locations. Perhaps a top-down look at how these incredulous pirate would-be-governors managed to build a city of their own, or a look at what happened to Kingston would be very cool, but that may just be my love of Assassin’s Creed IV: Black Flag talking. 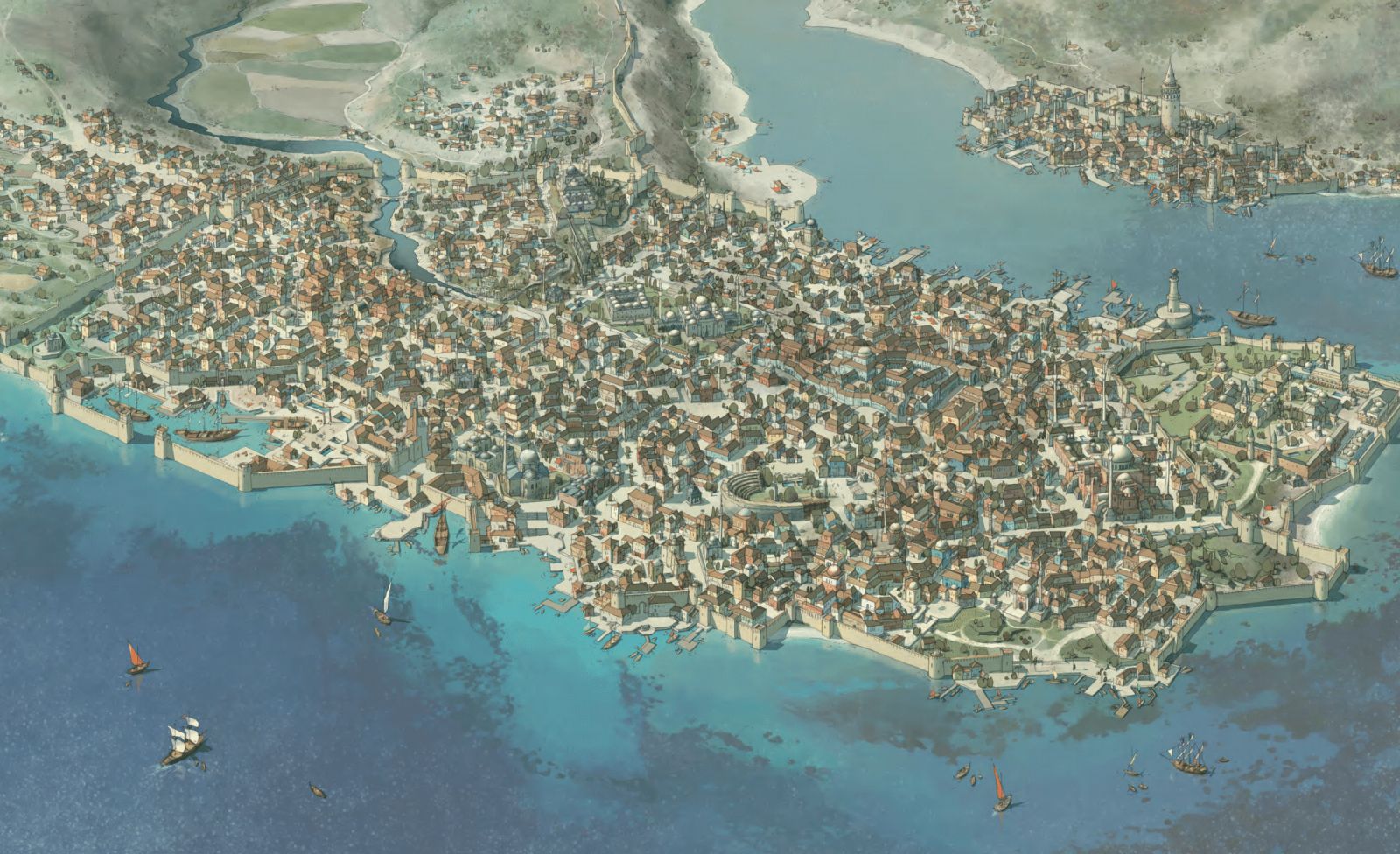 Putting together something as big as this takes time, sometimes a great deal of it. As a result, this book covers everything up to Assassin’s Creed Valhalla. At the very end of the book is an add-in — a map of the world of Valhalla’s base game, with call-outs for the areas of Mercia, Northumbria, Wessex, and the smaller states within. It’s a nice way to include this newest installment to the series when there simply wasn’t time for a proper installation of another chapter. It’s a high quality map, so don’t think of it as an afterthought — it’s clear they didn’t.

Something entirely new for this book is the beautiful cutaways provided by Rocio Espin Piñar. Her work is absolutely beautiful, providing gorgeous representations of some of the biggest pieces of architecture in the entire series, including the aforementioned Hagia Sophia, and the village of Monteriggioni, the family home of Domenico Auditore. These hem in nicely with the beautiful work by the Ubisoft team, and I’m glad they chose to include it here. It’s a window into places that many of us will never see for ourselves. 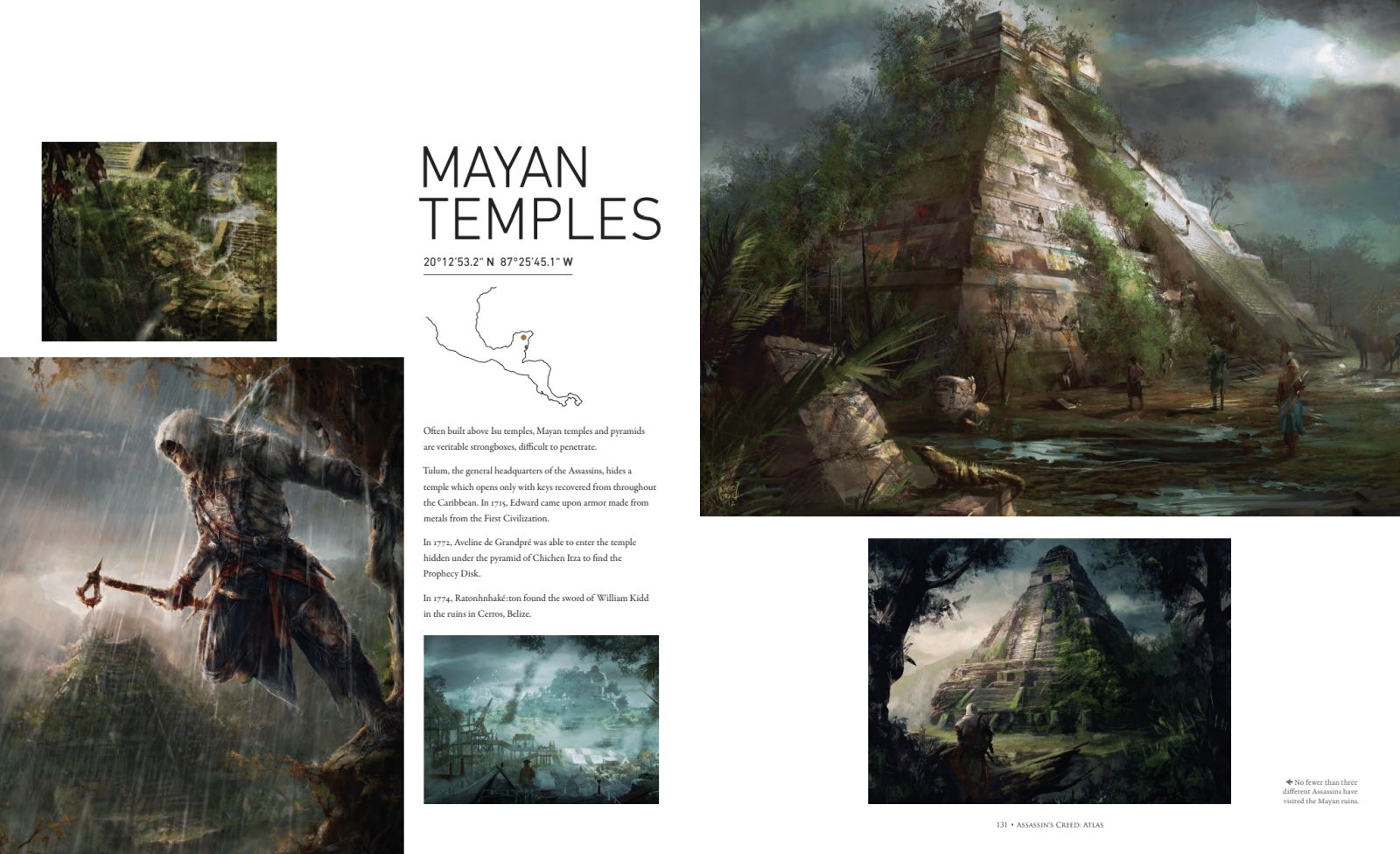 While Assassin’s Creed’s best moments exist in the past, the game also takes us into the sci-fi future as well. Towards the end of Atlas we get a look at some of the Abstergo Industries / Abstergo Entertainment locations, such as their HQ in Montreal. These sections cover the modern Brotherhood and Templars, as well as our few dips into fantastical locations like Atlantis and brushes with the Isu. If you are like me, those modern moments are just a blip before you can jump back to the past, but as they are part of the series, they get their own section here.

The final portion of the book consists of two interviews — one with Maxime Durand, and another with Raphael Lacoste. These interviews shed some light on some of the worldbuilding for the series, and there were a few tidbits that I didn’t know. It’s nice when you can discover something new for a series you love.

Progressing through the book it achieves the desired effect — if I had infinite money and time, this would be my roadmap for world travel. Seeing the Sphinx of Egypt with the great Pyramid of Giza is amazing on paper, and it’d be even more incredible in person. Similarly, seeing the Hagia Sophia, considered to be the 8th Wonder of the World, would be a bucket list item on steroids. But don’t take my word for it — Nothing is true; everything is permitted means you should find out for yourself.

Assassin’s Creed has always been steeped in real-world historic settings, and this Atlas helps bring them all to life -- even the ones that have been lost to antiquity. If you are a long-standing fan of the series, this virtual tour of the world is a must have.

Ron Burke is the Editor in Chief for Gaming Trend. Currently living in Fort Worth, Texas, Ron is an old-school gamer who enjoys CRPGs, action/adventure, platformers, music games, and has recently gotten into tabletop gaming. Ron is also a fourth degree black belt, with a Master's rank in Matsumura Seito Shōrin-ryū, Moo Duk Kwan Tang Soo Do, Universal Tang Soo Do Alliance, and International Tang Soo Do Federation. He also holds ranks in several other styles in his search to be a well-rounded fighter. Ron has been married to Gaming Trend Editor, Laura Burke, for 21 years. They have three dogs - Pazuzu (Irish Terrier), Atë, and Calliope (both Australian Kelpie/Pit Bull mixes).
Related Articles: Assassin’s Creed Atlas, Culture
Share
Tweet
Share
Submit