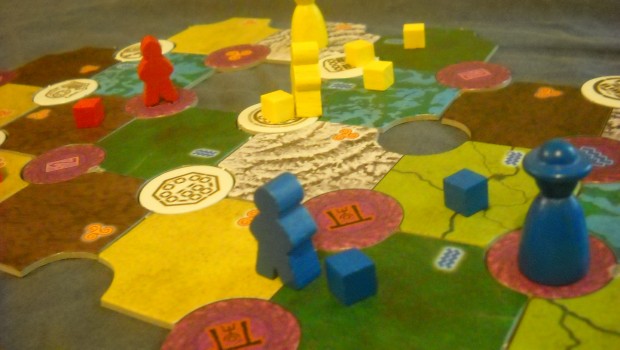 Interacting with gods can be difficult. You want them to do something nice for you now, like give you a new car, but in the long run you want to make them happy so you can go to heaven. That is one of the key dilemmas in the game Asgard’s Chosen by Morgan Dontanville and published by Mayfair Games. Asgard’s Chosen takes place in the world of vikings, dragons, and giants as you seek to gather epic monsters to your cause, claim land, call on the Norse gods for favor and ultimately appease them through sacrifice.

The rulebook is pretty good overall. There are plenty of illustrations and walk-throughs that really help explain the game. It is a complex game, and there are some corner cases that are not addressed, but I’m willing to be lenient. One cheap and disappointing thing is that the player aids are just a page in the rulebook that has to be cut out by the game owner.

There are two key elements that drive this game, and I like both of them. The first is the god cards, which make up the entirety of your starting deck. You can play these cards for a benefit, called a favor, or you can score a point by meeting certain conditions and placing them out of the game, called appeasing them. Appeasing gods often means losing control of terrain or losing cards from your hand. There is always tension with the god cards between using them for their favor or using them to score points. The game ends when someone appeases a predetermined number of gods (five in the standard game) and the round finishes giving everyone a chance to appease another god or two before awarding victory to whoever has the most gods appeased. Even though the game has deck building and area control, neither is the victory condition, rather this game is a race to complete the objectives on the god cards.

The other key element to this game is terrain matching. The board is made of six different types of terrain, and the kinds of terrain you control affect which cards you can buy, which cards you can play in a battle, and which cards get their bonuses. Each terrain also has an opposite terrain type and cards of that type cannot be played. Strategically you want to focus on only a few types of terrain that you want your deck to be good at fighting in. As I explain the rest of the rules, this should all fall into place. The board is modular and can be built by the players, one at a time in turn order before the game starts, or the rules provide a recommended layout.

Here are the turn basics: first each player may choose to play a god card for its favor. This favor may trigger at this point or during a different phase, but it is always played at the start of the round. For example, god favors include card draw, greater strength in battle, or more flexibility in buying cards. Next is the charm phase, where certain kinds of cards that have an effect all round are played. They are somewhat less common.

Next is the campaign phase. Each player has two heroes on the board, a male and female hero. On their turn they may move one of them, and then on their second turn they will move their other hero. Usually the heroes are used to make attacks, but players may choose to move into enchanted lands for their bonuses. There are three kinds of territory on the board: terrain, towns, and enchanted land. If you move your hero into a terrain or town you don’t control, you have to fight to gain control of it. Moving into enchanted lands does not require fighting unless your opponent has a hero there. Enchanted land gives you a bonus of some type, for example higher battle strength in some kinds of terrain, a free random card buy, or larger hand size.

The next phase is the muster phase, where players can buy cards. The cards you can buy are laid out in two rows of four cards each. The bottom row is the only one normally available for purchase. Players can only buy cards of terrain types that they have control over, so if you don’t have a control marker on a bog terrain then you cannot buy a bog creature. Heroes allow you to purchase a card from the top row, provided the hero is on the terrain type of that card. Players take turns buying cards, paying for them with the same power numbers used in combat and placing them in their personal discard. The terrain matching rules apply here as well; paying with cards that match the terrain gives bonus and you can’t pay with cards of the opposing terrain. While one card is bought per turn, players can have an unlimited number of buying turns.

The last phase is the renewal phase and players may discard any number of cards from their hands before drawing up to their hand size (which is seven by default). Players also discard the god they used for favor and their charm card at this point.

Why you might like Asgard’s Chosen
I love how the god cards work. They are useful for their favor, but removing them from the game is the only source of victory points. Appeasing them means losing cards or weakening your board position. The effect is that whoever is winning is in the worst shape. This is a nice balancing mechanism.

I love how the terrain types interact with the cards. I often start the game by looking at the cards available for purchase and decide on the two terrain types I want to focus on. I can use the card benefits for fighting into and out of those types of terrain all game long. I also like how opposing terrain trims the militia, but also forces me to avoid attacking some kinds of terrain. Terrain matching also constrains my card buying in a way that I think nicely simplifies the decision making while still providing room for strategic play.

The theme comes through nicely in the creatures and god cards. It is fun to play giants, dragons, trolls and dwarfs in a game. It’s also fun to say, “I call upon the favor of Thor!” The terrain is very abstract, but the cards really fill out the theme well.

Even though area control is part of the game, being behind or getting beat up is not too bad. The game is designed to reward the defender with card draw. Also, not all of the gods require control of a lot of terrain in order to appease, so you can still win even if your board position is bad.

The more I’ve played the game, the more obvious it’s become that some creatures are better than others. Each creature has a terrain ability that can be used if fighting into or from that terrain. Some of the powers are situational but some others of an equal price are always useful. Always useful powers are better since you can always use them; you don’t have to hope for the right situation. It is also discouraging to see a lack of variety in the creature cards. There are three kinds of creatures for each terrain type. So a total of eighteen terrain abilities in the whole game. That’s pretty low variety for a game like this, especially when the abilities are so poorly balanced.

The learning curve on this game is pretty steep. Even for experienced board gamers it is hard to grasp at first. While the game has both deck building and area control in it, neither of those are the victory conditions. That can be disorienting because you expect those elements to be part of your score, and they are only a means to an end in this game. Combat can be confusing at first too with the exclusions, bonuses, and replacement rules. I think the system works well, but it is hard to learn because it is unique.

As you may have noticed from the pictures, while the card art is attractive, the terrain art is ugly. The colors are mostly drab and patterns are repetitive. Also, the cards are pretty thin for a game with so much shuffling.

I did not mention the barrows in my overview, but it is an alternate discard pile which cards go into in only a few situations and which card come out of through only a few cards. Putting cards in and getting them out is too random to provide a feeling of strategic depth.

I love discovering games that are really innovative and really bring mechanics I am familiar with together in new and exciting ways. Asgard’s Chosen does just that with deck building and area control while also rethinking the goals in a card based game. I think Asgard Chosen breaks some new ground and creates a fresh new experience, but it has a few shortcomings in execution that undermine the game and keep it from being a must-have.