Upon playing Army Corps of Hell  for the first time, I was allured by the hellish art direction and heavy metal soundtrack blaring as you conquer the world one stage at a time. It’s as if someone were sifting through their music collection, came upon the heavy metal albums they head-banged to in high school, and found inspiration out of that moment of nostalgia which led ultimately to the development of this game. Army Corps of Hell  gets a lot of things right, and it’s great to have another worthwhile title in the Vita’s library, but at the current price tag it’s a hard sell. Let me tell you why.

This is undoubtedly an entertaining game, if you’re familiar with the Overlord  series or Pikmin  you’ll have a basic idea of what Army Corps’ gameplay is like. You control a small group of units that are divided into three different types: soldiers, spear men, and magi. I won’t go into detail about how they work, but essentially you can utilize their respective forms of attack in order to dispose of your enemies with maximum efficiency. The premise of the combat revolves around utilizing your units effectively, dancing around the enemies to avoid their attacks, and keeping your units alive. I actually found the gameplay fun for a while, but eventually the redundancy of it all wears you down. It also doesn’t help that the stages don’t offer much in terms of variety.

[singlepic id=4759 w=320 h=240 float=right]Outside of the core gameplay, the story is presented in a series of mostly recycled still images with a limited amount of dialoge. For the most part, you as the King rant about taking over the world and proceed to kick around your followers a bunch, and that about covers the broad strokes (in other words, there isn’t much depth). The other aspect of the game that works to keep you engaged is the upgrade and customization of your King and the units. You collect resources within the stages which can be used to enhance your army with weapon and item upgrades for your units as well as your King. This is supposed to add depth, but honestly it feels arbitrary and there isn’t much decide in terms of upgrade paths. This all adds up to a mildly entertaining but ultimately shallow gameplay experience.

I thought perhaps the lukewarm single-player campaign might be counter-balanced by the multiplayer, but alas, Army Corps of Hell  only supports ad hoc multiplayer and I couldn’t find anyone else with a Vita to play with. So while that might be a promising portion of the game, the archaic lack of network multiplayer means I can’t speak on its behalf.

[singlepic id=4758 w=320 h=240 float=left]In regards to taking advantage of the Vita’s touch controls, the front touchscreen is used to activate your “special” ability while tapping the rear touchpad in quick succession amplifies the effect of the ability. It doesn’t add anything to the gameplay in any creative way, and I could rarely tap the rear touchscreen fast enough to unleash anything besides a dud of a “special”.

I know this review reads as though I didn’t enjoy Army Corps of Hell , but I really did for a while. There are a surprisingly large number of stages, and I was humming along through about a third of them. I’ll even give the game brownie points for being portable friendly – and by that I mean I could easily complete a stage or two during my train ride to work. You can play the game for 15 minutes and make progress. However, as I mentioned before, it doesn’t take long for things to become stale and your interest to wane. For $40 minus one cent, Army Corps of Hell   is a difficult recommend, but when it drops to $20 or lower, I believe it would be a welcome addition to anyone’s Vita library. 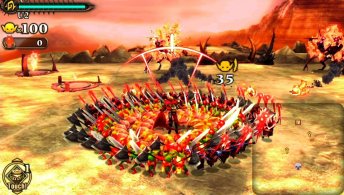 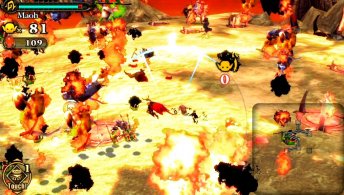 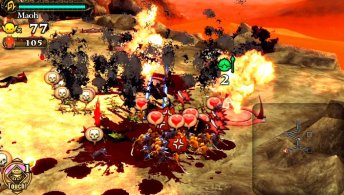 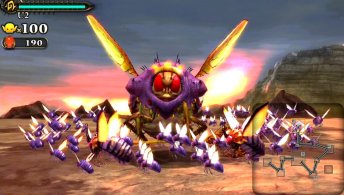 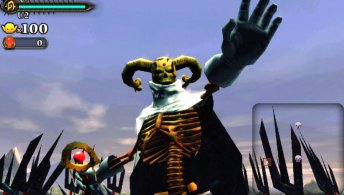 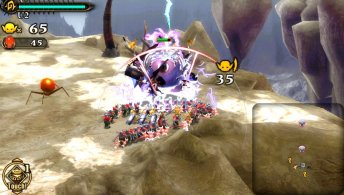 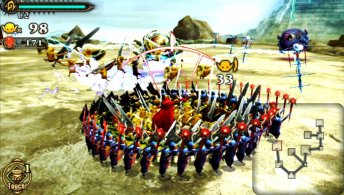