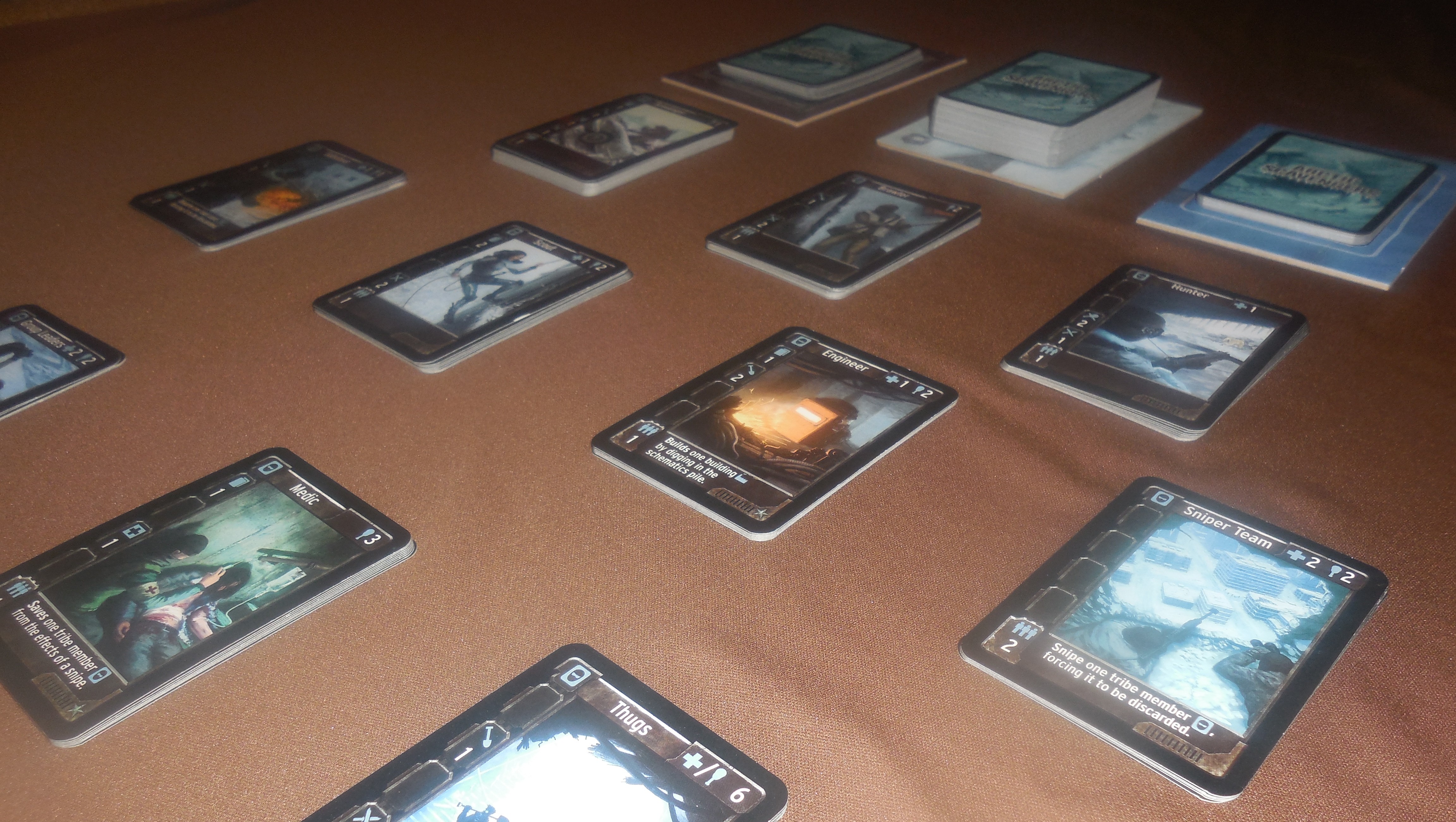 So much for global warming! The earth has suffered cataclysmic climate change plunging it into a new ice age. You are leading a tribe of survivors and your goal is to have the largest tribe at the end of the game. Arctic Scavengers, while actually an older game, attempts to bring some new twist to deck-building, but unfortunately, the twists don’t add together to a great game.

The rule book does have some typos that are frustrating but not game breaking. For example, the listed number of contested resource cards is wrong. The rules also lack clarity when to for when to shuffle the junkyard deck.

Another major annoyance is that you cannot close the box all the way after you open the game. Once the cards have been placed in their labeled slots in the box, the small boards used to indicate the different piles do not fit and the box rests half an inch too high. The designer posted on BoardGameGeek a way to cut the insert so that it would work, but Rio Grande should not have made such a hack necessary.

The artwork helps convey the theme well. The components are of a good quality too, with thick cards and thick cardboard mats for marking the different decks.

Each turn has two phases. First, players in turn order play cards from their hand to collect resources. All actions a card might be used for are listed along the left edge of the card,with blanks indicating that a card cannot be used for that action. When you choose to do an action you usually play multiple cards, add up their strength for that action, and then perform it. Drawing allows you to draw cards equal to the sum of the draw symbols. Digging allows you to look at a number of cards from the junkyard deck equal to your digging symbols and keep one. The junkyard deck is a pile of shuffled facedown cards which include tools, medicine, and “junk” cards. Hunting allows you to gain food to buy a new tribe member with. Food only last the round that you generate it, so it is very much like money in other deck building games.

Tools are an important part of the game and are acquired from the junkyard and the contested resources pile. Tools give a boost to one or more actions but must be played with a tribe member who can do that action. Medicine is also very important and easy to miss your first game. It can only be acquired in the junkyard through digging but is necessary for recruiting the best tribe members.

The Rio Grande version of the game ships with a small expansion in the box. The expansion provides some neat additions. There are goal cards that give points for having the most buildings, medicine, or tools. Each player starts with a leader who provides a specific ongoing bonus. Many of these revitalize the mostly dead cards in your starting hand. The third thing it adds are buildings, which allow you to store cards from turn to turn. There are also some additional cards to buy, including one that gives medicine, a much needed addition. After your first game I recommend playing with everything in the expansion.

The junkyard is unique and changes things up from the typical deck-builder. This is another element where you can’t buy your way to victory. You have to get lucky and draw what you need. The more digging skill the better the chance of drawing a good card to keep.

The game is not multi-player solitaire. In many deck-builders you can plan your turn out completely once you draw your hand. Others require a little bit of modification due to other player’s draft choices, but this is more of a denial mechanic. Arctic Scavengers has the direct competition of the skirmishing as well as a few cards that let you target and neutralize other player’s cards. This is a much more interactive game than most deck-builders.

The greatest reason you might not like Arctic Scavengers is that it is highly random. A game with strategic and satisfying decisions has allows good decisions to be rewarded and has just enough luck to provide variety and eliminate single dominant strategies. In most deck-builders this randomness comes from the cards drawn from the deck. Arctic Scavengers has two more major sources of randomness. The contested resources pile is random, meaning that the reward for your decisions is random. The junkyard pile is random too, so the result of your digging decision is random as well. This ends up being too much randomness for me to feel satisfied that the best player won.

Playing with a set of ten out of the possible twenty-five cards gave Dominion, the first and best known deck-building game, a lot of variety.In Arctic Scavengers you always play with the same set of eight cards. Variety does not come from the choices you make, like which cards to draft this game, but instead the randomness of the contested resources, junkyard, and other player’s skirmishing actions.

The game takes exactly sixteen turns, which makes it feel like it ends too soon.I never got my deck running smoothly before the game ended, so the game never felt satisfying. The fun of a deck-building game is to get your deck working, draw the synergies you planned for, and earn victory points from your well-tuned deck. In this game I felt like my deck building decisions were not paying off before the game ended.

Who Can You Play With and How Hard Is It to Learn?

This game works well with a typical mid-weight board gaming crowd. People who have played Dominion or other deck-builders will have the easiest time learning, but anyone who has played modern board games will be able to learn this. This game is not for playing with non-gamers or family,as it’s too long and fiddly for them, but just right for people who regularly play board games. The rules are easy to teach and the icons make sense.

I can't recommend Arctic Scavengers. Despite a unique theme and some interesting variations on the typical deck-building game, the game does not come together into a satisfying experience. The randomness of the rewards for certain actions undermines the value of good decision-making and the brevity of the game cuts short any sense of accomplishment I might have. There is also pretty low replay value for a deck-building game given the static set of cards.