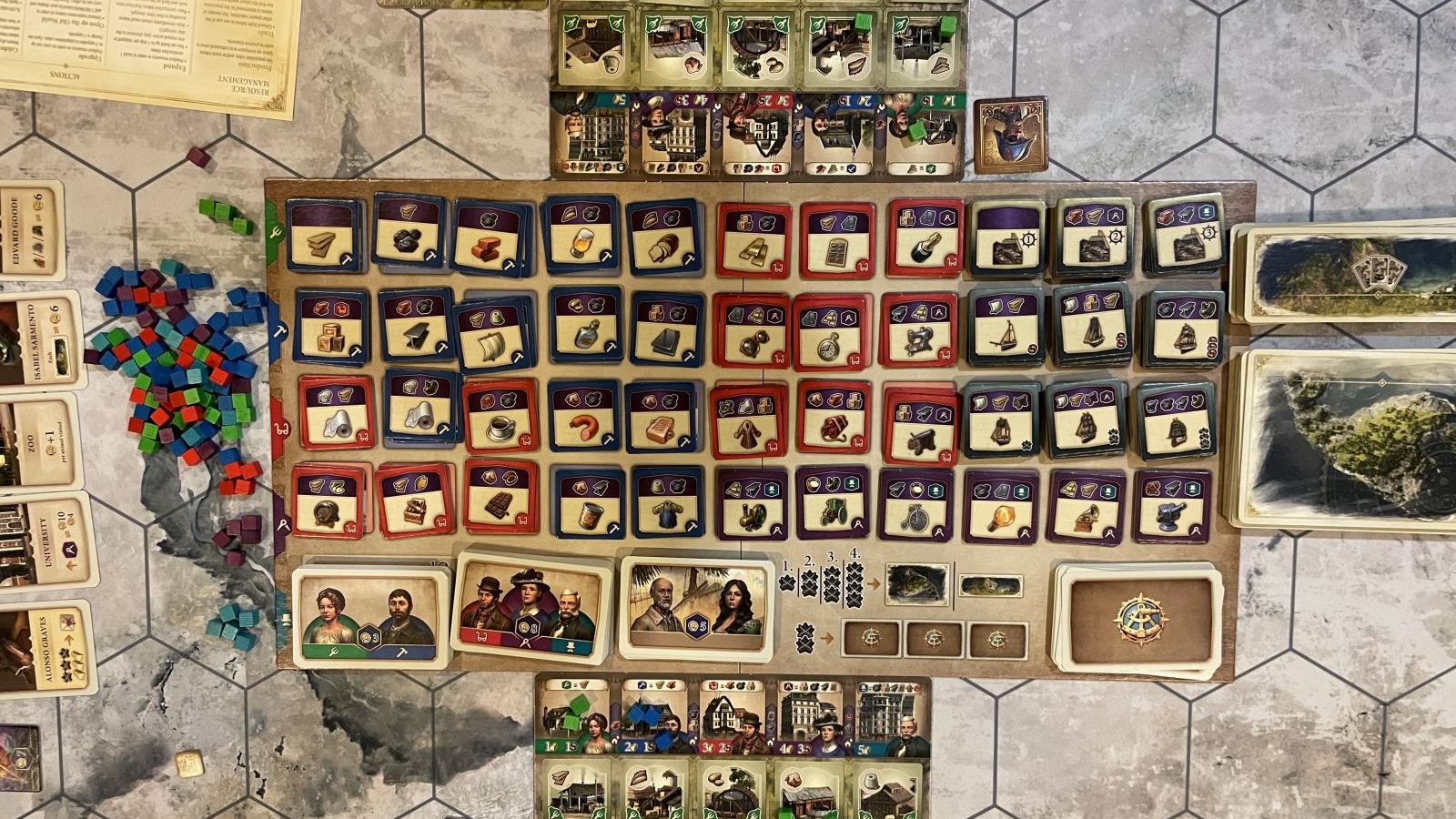 Cubes. Tiny, colored, wooden cubes. Fans of euro games are already shaking with excitement, but there is quite a bit more to love about Anno 1800. Anno is a table hogging love letter to the computer game of the same name. Production, resources, tiles, cubes, victory points, this game has it all and it’s not even all beige. Woah.

Those familiar with the PC game will immediately be at home with the struggle of balancing the five different types of workers with a limited amount of space to build in. This struggle is a crunchy puzzle that evolves over the course of your game as you shift your focus from engine building to end game scoring. Before you know it, your humble farmers will be turning those potatoes into vodka for your workers, who will in turn make your steel into ships with which you will expand your empire of tiles and cubes in pursuit of the most well tuned cube churning points engine. 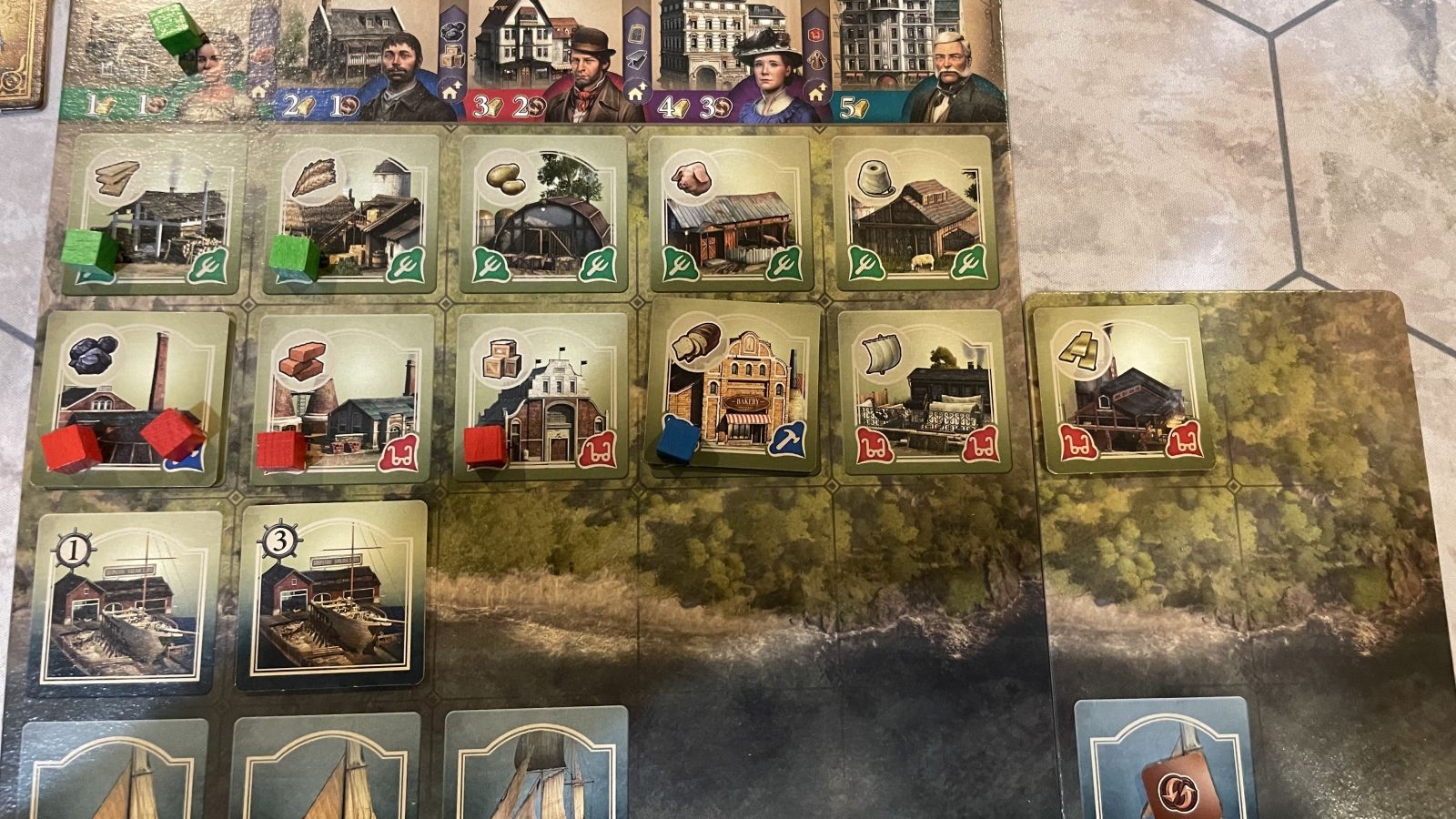 You build your engine by producing resources and expanding your manufacturing capacity through new factories. Each factory can be activated twice and is color coded to what tier worker is needed to operate it. Once you feel like you can no longer do anything, either because all of your workers are out, or the critical goods (looking at you coal) are filled up, or whatever reason you want, you throw a huge party and everyone goes home, ready to work another day. The festival action returns all of your workers, trade, and exploration tokens to your supply ready to begin again on your next turn.

If you’re not familiar with the PC game (don’t worry, you don’t need to be) then I should probably mention that you’re building on an island. A small island. You can pursue constructing exploration ships to discover additional islands to build on, but space will always be tight. The good news is you don’t have to produce everything yourself. See something you need on another player’s island? Go ahead and take it. They can’t say no. Really. They can’t. This creates an interesting mini game of producing the things you really need while using your opponents to fill in intermediate steps or letting them produce the difficult end game items for you. Just because they can’t say no doesn’t mean the trade is free though. For every good that you take from your opponent you need to have the required number of trade tokens and you have to give them a gold for each item. Gold is very important, not only for trading but for getting the maximum use out of your limited worker pool by essentially paying people to work over time. It’s also worth points at the end of the game, but using it during the game can be much more impactful.

I can already hear some of you gasping: “They can take my resources?!?” Don’t worry. You don’t have any resources. Resources in this game are only produced when you need them. Nothing is saved at the end of your turn. If you need coal and pigs to make sausage then you put a worker on your coal factory, a worker on your pig farm, then you get to add the sausage factory to your island. There are no stored resources to build up or keep track of. Trades just allow you to use your opponents factories, not actually take their resources. This introduces another interesting puzzle. You can gamble on your opponent building the factory that you need;. you can build a rare factory yourself, but then that opens it up to everyone else to use; you can even destroy the factory after you’ve gotten what you need from it to prevent others from using it… but what if you need it later? The trade mechanic is wonderful and turns what would otherwise be an average engine builder into a real gem. Do you go it on your own, settling additional islands and producing everything yourself or do you build an empire of trade ships and let your opponents do the hard work for you? Both options are equally viable and fun to explore. 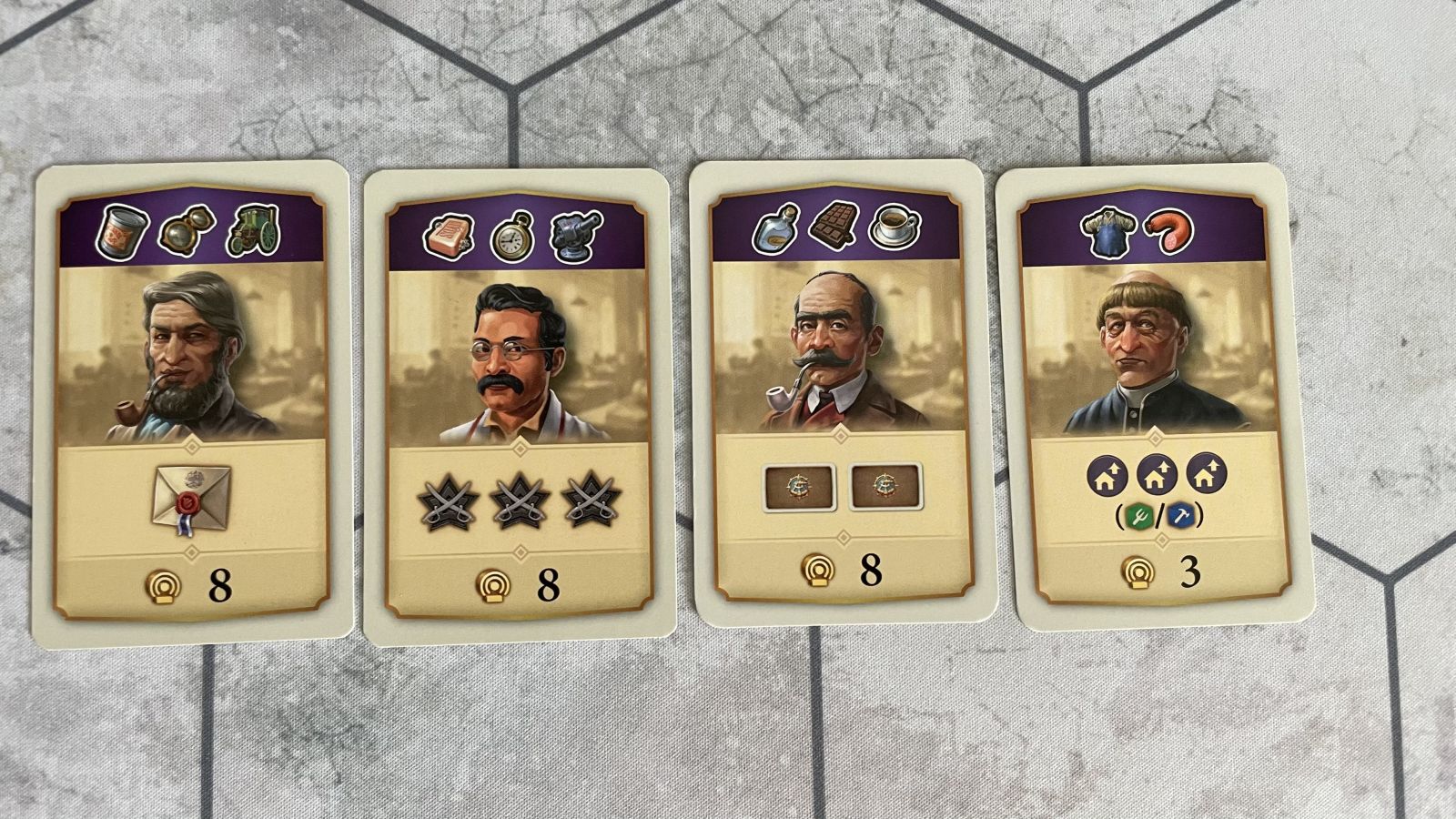 The resource production is the grease that drives the engine but what really drives the game is action cards. Every time you entice a new worker to your island empire they gift you with an action card. The cards provide all sorts of benefits as well as being the main source of end game points. There is a clever twist though. The cards are also the end game trigger. When one player runs out of cards, the game ends. The winner will likely be the player who can best estimate when the right time is to switch from expanding their empire to churning out cards. You need workers to run your engine, which gives you cards, which give you points, but you need to run out cards to end the game. Simple right? You have to keep an eye on your opponent’s stack of unscored cards and strike first, scoring a card per turn and racing for the end of the game because it truly is a race. Once one player starts pushing towards end-game, everyone has to follow suit and hope they built the better engine or risk being left with a stack of unscored points at the end.

Let’s talk about those action cards though. I’m not a euro purist who dislikes any kind of luck in a game, but the action cards can be a huge boon, especially in the early game if you get lucky draws. The rewards can be things like gold, exploration tokens, trade tokens, and even extra turns, but they can also be cubes. Scoring a card that not only gives you points, but gives you free workers, which gives you more cards, which can be scored for more points (and possibly more workers) is pretty awesome. It’s also pretty awful to watch your opponents play these over and over again while you can’t seem to draw any yourself. There is an action you can take to cycle your cards to try to hunt for these but it’s still pure luck and wastes a turn likely better spent building another factory or ship. It’s very possible to play an entire game without ever actually buying a worker with resources and only getting free ones from cards and then upgrading them to the tier that you need. Without those free early game workers, you’re at a definite disadvantage. This shouldn’t be an issue over multiple games as your luck should even out, but if you’re a one and done type gamer, this could really ruin it for you. 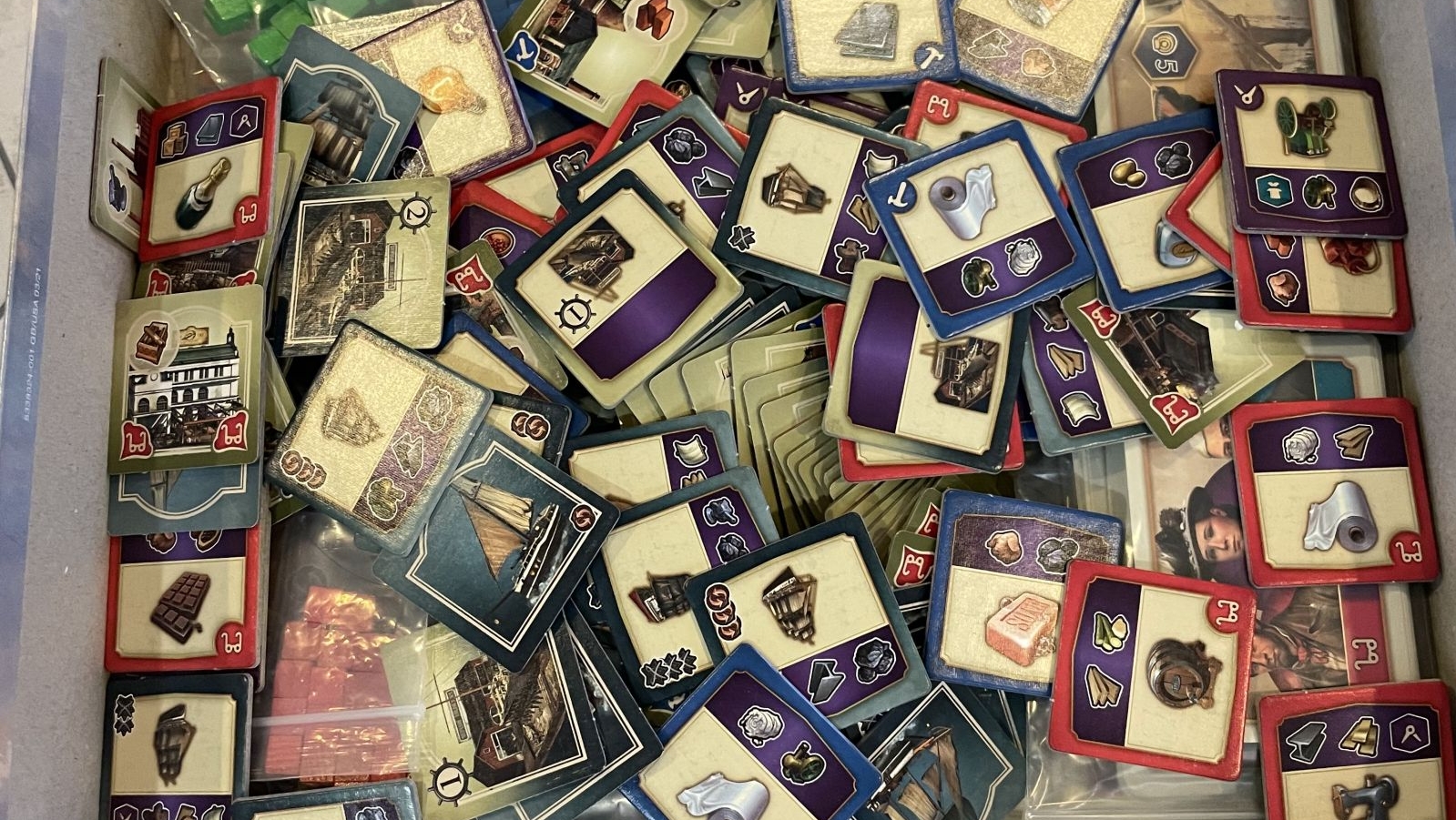 With only one action to take per turn, the game keeps a steady pace and the trade mechanics keep you engaged on every turn. The game goes long, two plus hours, but doesn’t feel like it overstays its welcome. The use of cards as both an integral in game mechanic as well as an end game trigger and point driver is clever and well implemented. While luck in the card draws can be impactful, there are ways to mitigate it. I have enjoyed every play of Anno 1800 and can’t wait to get it to the table again.

Anno 1800 the board game is clever engine builder that refreshes the genre with the ability to modify your engine throughout the game and introduces a clever a trade mechanic that I haven't seen before. It really feels like the designer loved the computer game and did an excellent job of bringing the feeling and themes to the tabletop.