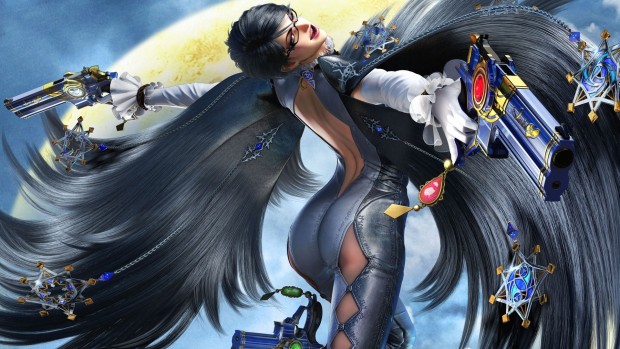 You know what’s weird? We live in a world where Nintendo has not only published a Legend of Zelda/Dynasty Warriors hybrid, but has also resurrected Bayonetta, one of the niche-iest action games ever to come out of Japan. Luckily, it was worth it—Bayonetta 2 is one of the craziest, most rambunctious action games I’ve ever played, with silky smooth controls and weapons that drastically change how you play. It’s absolutely gorgeous to boot.

Bayonetta 2’s story is stupid—and that’s saying something when compared to its narratively muddy predecessor. The world’s most fabulous witch is back, and the epic battle between the Lumen Sages (angels) and Umbra Witches (demons) continues. When a particularly hairy battle gets out of hand, sending Bayonetta’s partner-in-crime Jeanne to the underworld, it’s up to Bayonetta to go and get her back… Right?

I mean, that’s the basic gist of the story, as the game sees Bayonetta make her way to Fimbulvinter to resurrect her friend. On the way you meet up with punk kid Loki and deal with an ancient evil and…. honestly, it’s all a giant blur. The story is told in a combination of fully-animated cutscenes and this weird stop-motion-frame thing, and it hops from place to person so fast that you’ll have a hard time keeping up with everything. The lackluster plot makes it really hard to get invested in the context behind what’s going on, even if the characters themselves are strangely fascinating.

Yes, that’s Bayonetta riding on the inside of a tsunami while fighting a dragon. And this is one of the lighter sequences, too.

No, what the story does best is provide a flimsy excuse to whisk you from action set-piece to set-piece, and in that department, Bayonetta certainly does not fail. Right off the bat, you’re battling the forces of heaven from atop a high-speed fighter jet, followed by a fight up the side of a skyscraper between a flying Bayonetta and her recently-made evil-hair demon (oh, yes, Bayonetta’s clothes are made out of her hair, and she can turn her pixie cut into a giant dragon that eats massive screen-filling bosses—I told you this game was bonkers).

Later fights actually show two battles going on on-screen—one, between your hair demon and your foe’s massive summoned monster, and your own fight between your lithe foe. And the Wii U trucks along, showing all of this non-stop over-the-top carnage at a blisteringly smooth framerate. Sometimes there are too many things going on on-screen that it’s easy to get distracted by all the surrounding elements, but make no mistake, Bayonetta 2 is a beautiful looking game.

One cannot review Bayonetta without addressing the elephant in the room—that being the titular character’s overt sexuality. Bayonetta is all about excess, both in the copious amounts of visual elements and crazy things happening on screen—like the wildest episode of Sailor Moon, Power Rangers, and Dragon Ball Z combined—and the overt sexuality of the female protagonist. The camera lingers on ass and breast shots, and many of her moves seem like they could have been learned at a Striperobics class.

There are two ways to approach this, and both have valid points to make. One is that Bayonetta is sexist, overtly so, and that it’s a classless and brazenly male gaze-y experience. And yes, it can certainly be that, as Bayonetta kicks her high heels over her head and sways to the cheezy high-tempo jazz music that plays in the background. But Bayonetta can also be seen as an example of sexual empowerment because she owns it. She’s an interesting character (designed by a woman) and a total bad ass to boot. She’s perfectly capable of saving herself, thank you very much, and her sex is only one aspect of her personality (even if it is over-exaggerated)—which is a far cry from the typical treatment women get from games. This review merely scratches the surface of her character, and people much smarter than I have explored these themes in much more depth. That said, it’s worth mentioning because it’s such an integral part of how you play the game and what actions Bayonetta takes as she fights, and some may find the blatant sexual content off-putting.

Whether you agree with that or not, make no mistake—Bayonetta 2’s combat is second to none. You’ve got punches, kicks, and guns at your disposal, and pressing these buttons in sequence will unleash all sorts of different combos. But you can’t just button-mash your way to victory—the key to truly unlocking the depths of the combat and actually making progress lies in how well you master the dodge skill. Properly timing your dodge against an enemy’s attack slows time, giving you a couple seconds of free hits against your enemies. It’s a manic ballet of bullets and special moves, and it takes some serious skill to learn how to properly read their telegraphed moves. Once you get it, though, you’ll find one of the most sublime fighting systems ever made for a character-based action game—even when you find yourself running through a lot of the same environments and fighting the same bosses over and over again.

You have a wide array of… unique finishing moves at your disposal.

Fans of the first game might be a little disappointed to find that the sequel is a bit more forgiving than before. Recovery items are much more plentiful, challenge rooms (which were a real pain the first time around) are much easier to complete now, and it’s a lot easier to earn halos (the game’s currency) to purchase additional upgrades. Heck, one of the upgrades you can purchase will let you negate damage if you dodge right when you get hit, giving you a much bigger window for avoiding attacks. The first game was a struggle to beat on normal, with incredibly scarce healing items causing me to die multiple times per stage—on the other hand, I died maybe once or twice while playing Bayonetta 2.

But notice that I said “forgiving” and not “easier.” While it’s definitely much less frustrating to actually beat, actually finishing each stage with a decent ranking is where the true challenge lies. Completing stages without using items and without taking damage will give you a much better score than if you fumble your way through each encounter, granting you more halos to spend on new costumes and abilities. The combat is tricky to master, and with the addition of several weapons that all handle differently, there’s plenty of room for replayability and improvement.

Retail copies of Bayonetta 2 include a copy of the first game, and it’s probably the best looking version of the game you can get, though some minor framerate issues pop up when things get a little too hectic. With some additional costumes and upgraded graphics, new players looking to find out what the deal is with the witchy woman will find a fantastic opportunity here. Just be warned that if you purchase both games digitally, each download hovers around 16-17 GB, and you won’t be able to store both games on a single Wii U hard drive. Sad, I know.

Even with these concessions, Bayonetta 2 demands the best from you, and will compel you to improve at every turn. And with a combat system this good, you’ll want to get better, just so you can pull off each of her increasingly ridiculous moves. Sure, the story may be silly, but damn if it isn’t pure, goofy fun. I want to know what kind of crazy pills Nintendo and Platinum are taking, because I want some so bad.

Bayonetta 2 is a worthy sequel, filled with ridiculously over-the-top action sequences and a combat system par excellence. Just don't come for the story.