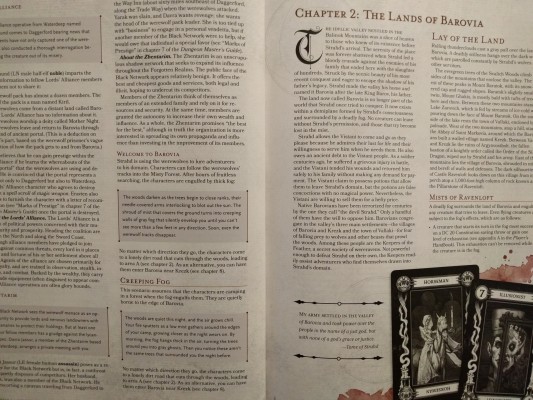 I swear the team at Wizards of the Coast are in my head with their latest D&D releases. It had been a long time since I’d played, but John’s review of the D&D Starter’s Set piqued my interest in tabletop role-playing once again. We set out for Menzoberranzan in Out of the Abyss, letting me strike out on Dark Elf adventures once again, with a little help from the new D&D Player’s Handbook. Now we’re headed to the world of Ravenloft for this 5th Edition of the classic Curse of Strahd.

For those who haven’t traveled the dark corners of the world of Ravenloft, the module centers around the vampire Count Strahd von Zarovich — the master of Castle Ravenloft. The Count has invited you to dinner, and who are you to refuse?

All of your senses will be engaged in Strahd

Tracy Hickman provides a fantastic forward for this retool of the classic module. In it he discusses how the modern vampire is a perversion of the abusive monster that once ruled the night, replaced by its sparkling polar opposite. Re-engaged by Wizards of the Coast, Hickman has rebuilt this fantastic adventure for a whole new generation of would-be lycanthrope-slayers.

The module is best tackled by four to six players, and is intended for characters ranging from level 1 through 10. That’s a pretty wide spread by D&D standards, but freshly-rolled characters aren’t overly disadvantaged here. That said, a balanced party is all but required as many of the puzzles in the 256-page book lend themselves to specific skillsets offered by class archetypes.

Certainly an inspiration for Konami’s classic Castlevania, Curse of Strahd involves coming face to face with the big bad of Barovia, and then spending the rest of the campaign discovering how to stop him by discovering his weaknesses to try to slay him, or succumb to his power and be lost to darkness forever.

Lead Designer Christopher Perkins’ module engages in a way that few others do — using your other senses. In the sidebars and in the greyed DM-only boxes, the team has placed signals around how things sound, smell, or other player cues that may lead them down a specific path. It serves as cues that the DM can provide, and it’s assembled piece-by-piece based on player interaction. For instance, during one section, the DM will read a longer section of background, but there are several add-on bits based on whether or not braziers were lit by the players, dispelling the revenants that would otherwise await them. How things smell, taste, sound, and engage player senses is usually something only a good DM would bring to the table, and it’s nice to see some guidance for new storytellers.

One of my favorite aspects of this new iteration is the inclusion of the original module, as well as the new expanded content. You can run it as it was originally released in 1983, use the new content as you see fit, or anything in between as best serves your campaign. It helps to justify the somewhat-stiff $49.99 pricetag.

One aspect of the Transylvanian-inspired culture for Strahd is a deep-seated belief in the Tarot. As an optional add-on, there is a $10.00 56-card Tarokka Deck that will allow the DM to further shape the game, but it also adds a tangible immersion aspect. The artwork is sharp and evocative of the setting, and the cards can be used outside of the campaign to also play Prophet’s Gambit, a card game for 3-5 players. In the E Appendix of the book is the full deck, but the tangible ones would really add to the campaign.

I highly recommend the $10 card deck.

The final pages of Curse of Strahd include something that further justifies the $49.99 asking price — a multi-page foldout map of Barovia. It’s a pack-in that hasn’t been included in previous offerings at the same price. In another step in the right direction, the Wizards team has also pre-seeded a whole host of excellent Online Supplement free downloadables such as optional character builders, full integration for Fantasy Grounds and the Dungeon Masters Guild, and even free print handouts of the letters players might encounter in the campaign (included in the book as an appendix).

I came away very impressed by Wizards of the Coast’s most recent outing. They’ve tackled a classic campaign, updating it for the current ruleset, and simultaneously adding a host of incredible add-ons and free downloads. Curse of Strahd is absolutely bulletproof, and it’s every bit as dark and twisted as you remember. Join the Count for dinner -- you won’t be disappointed.

Ron Burke is the Editor in Chief for Gaming Trend. Currently living in Fort Worth, Texas, Ron is an old-school gamer who enjoys CRPGs, action/adventure, platformers, music games, and has recently gotten into tabletop gaming. Ron is also a fourth degree black belt, with a Master's rank in Matsumura Seito Shōrin-ryū, Moo Duk Kwan Tang Soo Do, Universal Tang Soo Do Alliance, and International Tang Soo Do Federation. He also holds ranks in several other styles in his search to be a well-rounded fighter. Ron has been married to Gaming Trend Editor, Laura Burke, for 21 years. They have three dogs - Pazuzu (Irish Terrier), Atë, and Calliope (both Australian Kelpie/Pit Bull mixes).
Related Articles: Curse of Strahd
Share
Tweet
Share
Submit