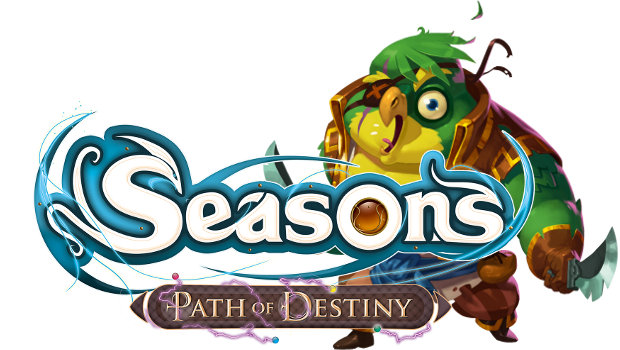 See my previous review of the Seasons base game and Seasons: Enchanted Kingdom, the first expansion, for rules, game play, component lists, and more: “Vicious Eye Candy – Review of Seasons.”

Wesley Snipes in Passenger 57 uttered the immortal line, “Always bet on black.” Mr. Snipes then found destiny leading him on a path to Canada. Something about taxes. And not paying them.

In Seasons: Path of Destiny, the onyx on which you desire to gamble is the new, black Die of Destiny. Even bigger than the chunky red, yellow, blue, and green seasonal dice in the Seasons base game, the new die supersedes all and can help you out of a jam when the seasonal dice hate you. It also accumulates Destiny points, the player with the most gaining 20 additional Prestige points at the end of the game—which means opponents now have one more worry.

Enlarging the Kingdom of Xidit

Inside the Seasons: Path of Destiny box:

The Enchanted Kingdom expansion introduced Enchantment cards and Special Ability tokens that modify the game, and Path of Destiny adds more. These include the Special Ability token to move a card in a later year into your current hand, or the wicked Crossed Paths Enchantment card, which allows players to force a card onto the player on the left during the card drafting.

The Psychic Trap token works with the new Urmian Psychic Cage card, which temporarily nullifies a magical artifact or familiar summons. The Argosian Tangleweed card allows the summoner to place the Deadbolt token on an opponent’s familiar, negating its effects as long as the Tangleweed remains in play.

Though the Die of Destiny is “officially” not in play unless one of its two Enchantment cards is on the table (one card adds the die alone, the other the die plus three crystals on the scoring track), NOT playing with it seems a waste. Might as well choose it and add a second Enchantment card.

The new die’s faces include the following symbols:

In Seasons, marching through the seasons of the year means rolling associated seasonal dice: blue for water/winter, green for earth/spring, yellow for fire/summer, and red for air/autumn. Each season has one more die than players, and each player selects a die in turn order, with the remaining die’s pips determining how many spaces to advance the months on the main board.

Now, the Die of Destiny gives players the option of taking a seasonal die and not using it, instead rolling the black die. This can be used to overcome a dregs pick, where a player is forced to choose from the lesser of bad seasonal dice options. It can also serve as an offensive strike against another player who might desperately need one seasonal die result. In the past, a player who purposefully prevented another player from getting a needed die result might not get much out of selecting that die. Now, take the troubling die out of play by selecting it, then roll the Die of Destiny instead.

So, grace for the player who would otherwise be stuck with a bad seasonal die roll, or a shafting of another player by taking that foe’s do-or-die die out of play. Angel AND devil. Sweet.

Lastly, using the Die of Destiny to accumulate Destiny points gives the player with the most at the finale a scoring boost of 20 Prestige points. That’s big. Not huge, but it can’t be ignored. This means players need to balance how those final die rolls may play out. It also sweats other players should an opponent clear all hand cards a round or two before the game looks like it may end. A couple final Die of Destiny rolls adds suspense and forces players to watch the other guy always.

As for a sampling of the new Power cards, Io’s Minion is a negative points card, which I ended up dealing out to an opponent in tandem, only to receive both Minions back in the last play, which lost me the game. Ouch. Chrono-Ring rewards the holder with crystals or energy if the month marker on the main board is advanced three spaces in one round—a nice balance against an opponent trying to rush the game’s end or a perk for a holder attempting the same. Dragonsoul lets a player “tap” a tappable card more than once a turn. Twist of Fate works right after the card draft and before the first turn. It lets the holder draw two cards and discard one along with the Twist of Fate card, leaving the holder with a card at the start that no one else has seen.

This set of Power cards includes more with summoning gauge boosts and deck draw functions, which were probably good choices, since a card draw in Seasons has always seemed to be the weakest selection on the dice. Why? Cards left in-hand at game’s end count as negative points. With Path of Destiny, more cards come out of that draw pile, which forces more strategic decisions about how to clear one’s hand by game’s end. It also increases the chance a player might get a needed card.

In a clever marketing ploy, only the first edition of Path of Destiny will include a promo card, Igramul the Banisher, which lets the summoner name a card in an opponent’s hand. If the opponent has it, it must be discarded, PLUS the summoner receives up to one set of energy ordinarily used to summon that discarded card. It gets worse: Igramul also forces all the opponents to reveal their hands. Yikes, that’s a nasty card, and it’s crazy powerful in a game based on card drafting. Something tells me I’m going to keep that one every time it shows up in my initial card deal.

Because we all love big dice

If you have Seasons, do you need this expansion?

Since any expansion for the base game will include cool cards not found in other expansions, the Seasons completist who wants all the cards will must-buy Path of Destiny. Still, there’s more happening here than just cards.

The previous Seasons expansion, Enchanted Kingdom, added cards, some game condition modifiers, and some other ways to score points. But the Die of Destiny in Path of Destiny actually changes the way players strategize, which makes this expansion more of a game-changer than its predecessor. If forced to choose between one expansion or the other, I’d pick Path of Destiny.

An expansion for the base game of Seasons, Path of Destiny adds more diabolical magical artifact and familiar cards while upping the strategy of the game with its Die of Destiny. Make up for a bad roll, take away an opponent’s preferred die roll result without personal consequences, and force others to watch how many Destiny points you’re accumulating while they struggle to meet their own winning conditions. This is a solid expansion to one of the best card games of the last five years.