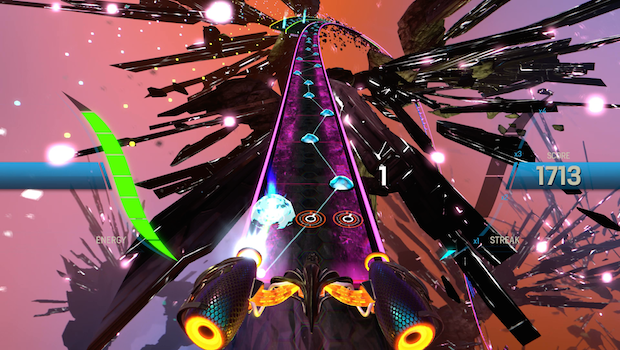 Before Guitar Hero or Rock Band broke the rhythm game genre wide-open, Harmonix was already laying the groundwork with Amplitude. A rhythmic shooter where you blast notes to keep the music playing, it was a major step forward in showing that you didn’t need a dance pad peripheral to bring beats to home consoles. The new Amplitude manages to revitalize the blueprint that spawned the genre, while creating an experience uniquely its own.

Amplitude goes by the same title, and indeed keeps many of the same factors that made the original so intriguing. As a ship flying through tracks of music, you have to successfully blast notes to the beat. Complete a phrase, and you clear that track, freeing you up to tackle other streams of notes. Bouncing from the bone structure of the drums and bass to the flavor tracks like vocals and synths is fast and intimidating, but it’s a mechanic that’s as unique and engaging as it was years prior.

You need to be clearing tracks constantly to keep your score high and ship alive.

The move to the PlayStation 4 brings a nice graphical overhaul, but the real star is the completely new soundtrack. Some may grumble about wanting the original tracks back (who doesn’t want a remastered mash-up of P.O.D.’s masterpiece “Boom”?), but in their place is a completely original concept album that’s a lot more endearing. Sections feel tailored to the game in a more natural way than a Blink-182 jam would, and a lot of the songs are still stuck in my head long after clearing them. They also lend a storyline to the campaign, one that you’ll likely enjoy uncovering as you work your way through as each song plays lyrically and musically into themes of synesthesia and mind alteration.

And you’ll really have to work, because Amplitude doesn’t pull any punches. The “no fail” modes of other rhythm titles are not here, and there’s no crutch to hold onto as you rocket through track after track of ever-progressing notes. Each track can be difficult, but there’s also a couple end-of-area “boss” tracks that will sap you of your life bar if you don’t have a certain certain combo streak when you pass through gates in the music. That life bar hits zero, and that’s it – no checkpoints, you’re starting the whole thing over.

It can get hectic and stressful trying to bounce between every track, especially on the harder difficulties. At some times, it feels like setting up every Rock Band instrument and trying to madly dash between all of them, keeping them from failing out. The tradeoff here is that once mastery comes, you go from feeling like a desperate, mad musician to a practiced one-man band routine, effortlessly flying through note sequences. It sometimes felt like I was in a groove, not even thinking about the track I was playing, but what track was next — which one did I need to jump to and what note does it start with, and then where to go after.

An unlockable Freq mode lets you fly through a tunnel instead of across tracks.

If you don’t have four Dualshocks, though, you can’t really make the most of Amplitude’s multiplayer offering. There’s competitive and cooperative multiplayer, but the level of entertainment you’ll get from it increases exponentially with the more people involved. It’s fun at a party where everyone knows how to play, but Amplitude isn’t the kind of pick-up-and-play experience that Rock Band could offer.

The campaign is also a little slim and cumbersome. To unlock special extra tracks, you have to achieve certain ratings on songs in an “area” of the campaign. The only way to go back and play songs you’ve already beaten is to completely restart the campaign, meaning you’ll have to play back through at least once (if not more) to get a full tracklist. There are also some songs from famous indie game composers to unlock, but those are much more straightforward — you unlock them simply through playing enough tracks.

Multiplayer is fun, but only if you have three other friends invested in Amplitude.

Amplitude is a great rhythm game, with a ton of content for score attack fiends who need their fix. The difficulty ramps up to astronomical levels on Expert and higher, and there’s plenty to love in both the original tracks and the indie game cameo tracks. It isn’t quite a party experience like any other though, so if you’re looking for a game to play with your less musically inclined friends, you likely won’t find that here. But as a revival of the blueprint that started it all, Amplitude is still a blast to play and an experience you won’t find in any other title.

Amplitude hits both highs and lows, but is the kind of score-hunting, high difficulty challenge that rhythm fans will love if they’re looking for something fresh. A solid revival for a pillar of the genre.