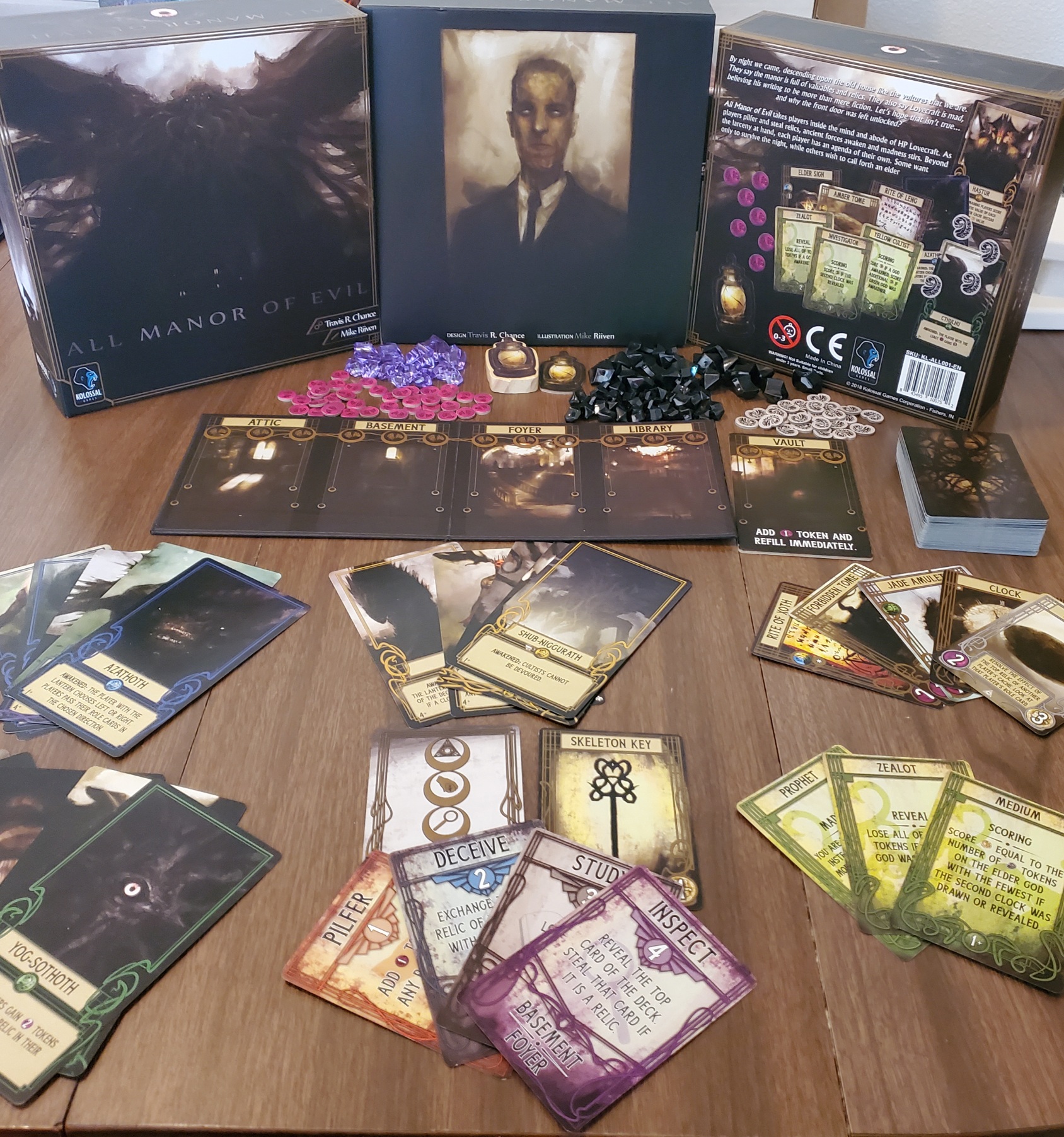 I don’t relish writing these sorts of reviews: game designers put a lot of time and effort into their work. Gameplay-wise, All Manor of Evil is a fine/OK/mediocre game. It’s not great, but it’s not really bad either. However, there are a number of auxiliary factors that drag this title down below mediocrity. Please note that for this review, I used the deluxe edition of the game that contains both the base game and the Madness Stirs expansion. 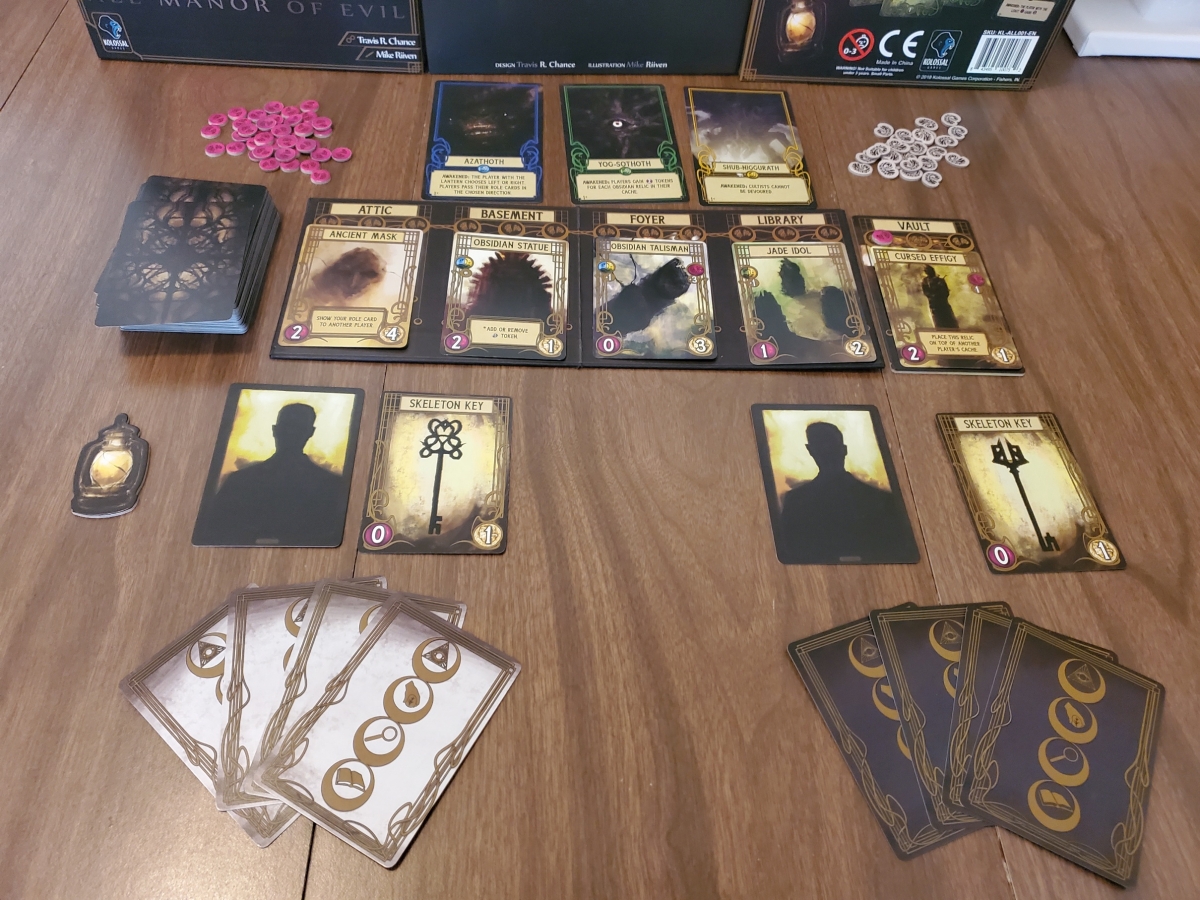 In All Manor of Evil, you play as characters who are attempting to steal relics from a mansion before an Elder God awakens or time runs out, and while avoiding collecting the most madness tokens and stolen relics. The surviving player with the most dollar value (points) at the end of the game wins. 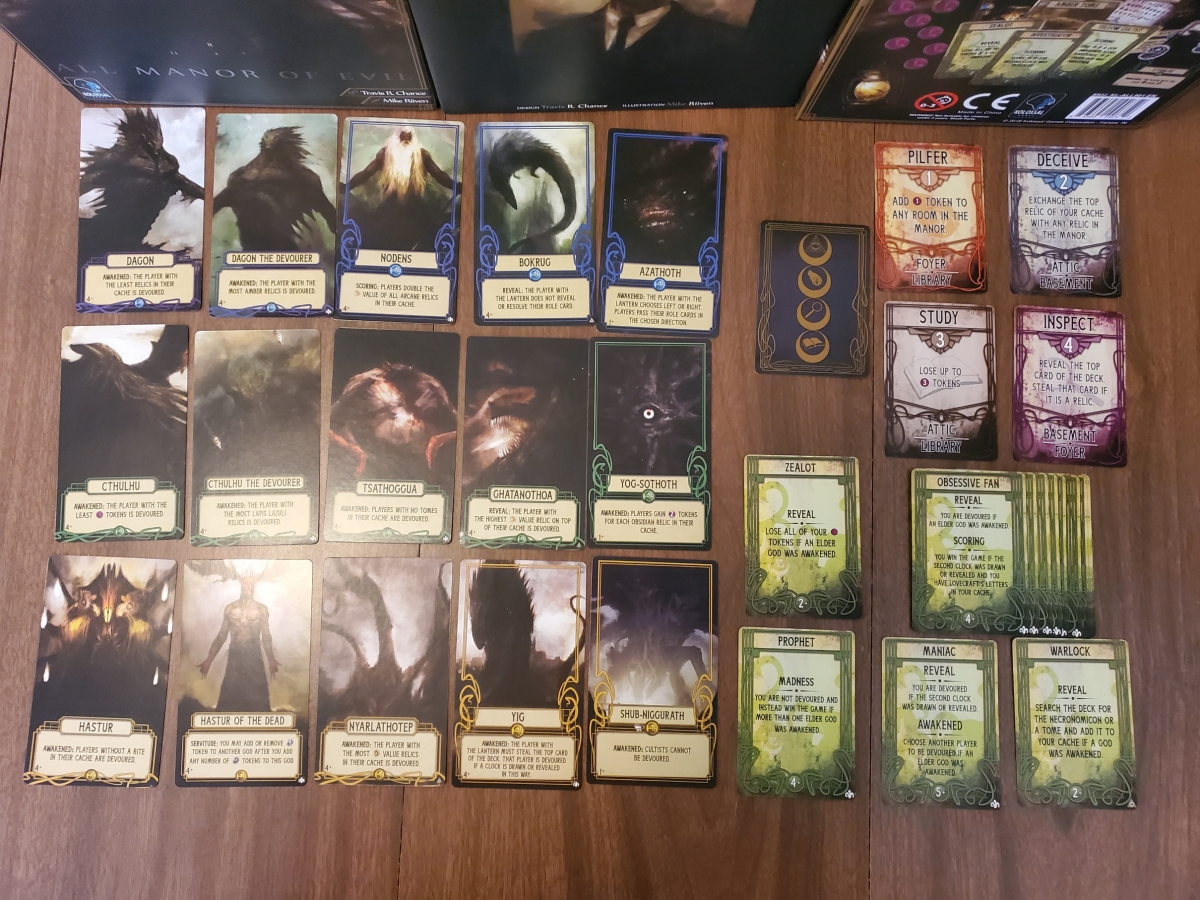 At the start of the game, each player gets a hidden role that modifies play (generally by modifying scoring or other end game factors). Every turn, players will select one of four action cards and play it face down. Players cannot pick the same action two turns in a row, and each of the four actions has a set initiative. When all players have selected their actions, players will flip them over and resolve them in initiative order. Players who play the same action as another player gain madness, and those actions with the same initiative are resolved in clockwise order from the “first” player. Each action card has one action for the player to take, and two rooms listed at the bottom. After taking the card’s action, the player must steal a relic from one of the two rooms listed on the card if possible. While stealing relics is pretty much the only way to gain points for scoring, doing such can trigger the accumulation of madness, help awaken one or more of the three selected Elder Gods, or cause other effects you might prefer to avoid. After every round, rooms are refilled with cards from the relic deck.

The game ends when either both clock cards are pulled from the relic deck or when one or more Elder Gods are awakened. When the game ends, the player with the most madness is devoured (eliminated). Should more than one Elder God awaken, all players are devoured.

As mentioned above, gameplay-wise, All Manor of Evil is fine. It doesn’t blow the doors off with excitement, but it’s an ok way to kill time. While the game supports 1-6 players, it does seem to get better with more people. In particular, the 1 and 2 player modes (which use dummy players) are pretty boring: it’s not particularly hard to manipulate the dummy players into positions that are advantageous for the live players. Even 3 players isn’t a particularly exciting player count, as there isn’t really much competition/conflict over actions, rooms, and relics.

Most of the included Elder Gods (24 out of 30) are listed as for use with 4+ players, and the Vault room is only used in 5+ player games. One of the most interesting of the 24 roles in the game – the expansion-only Prophet, who wins if more than one Elder God awakens – isn’t available in 1-3 player games. I suspect players will find this game is “best” at 5+ players, where you have access to all the game’s content. However, I don’t feel the gameplay is compelling enough to justify possibly only really working well at the higher player counts, especially given how difficult getting 5+ players together can be and what other good or better options exist for that player count. Plus, the sixth player is only available to people who have purchased the deluxe edition or Madness Stirs expansion, which potentially limits the base game’s ideal player count to exactly 5 players. 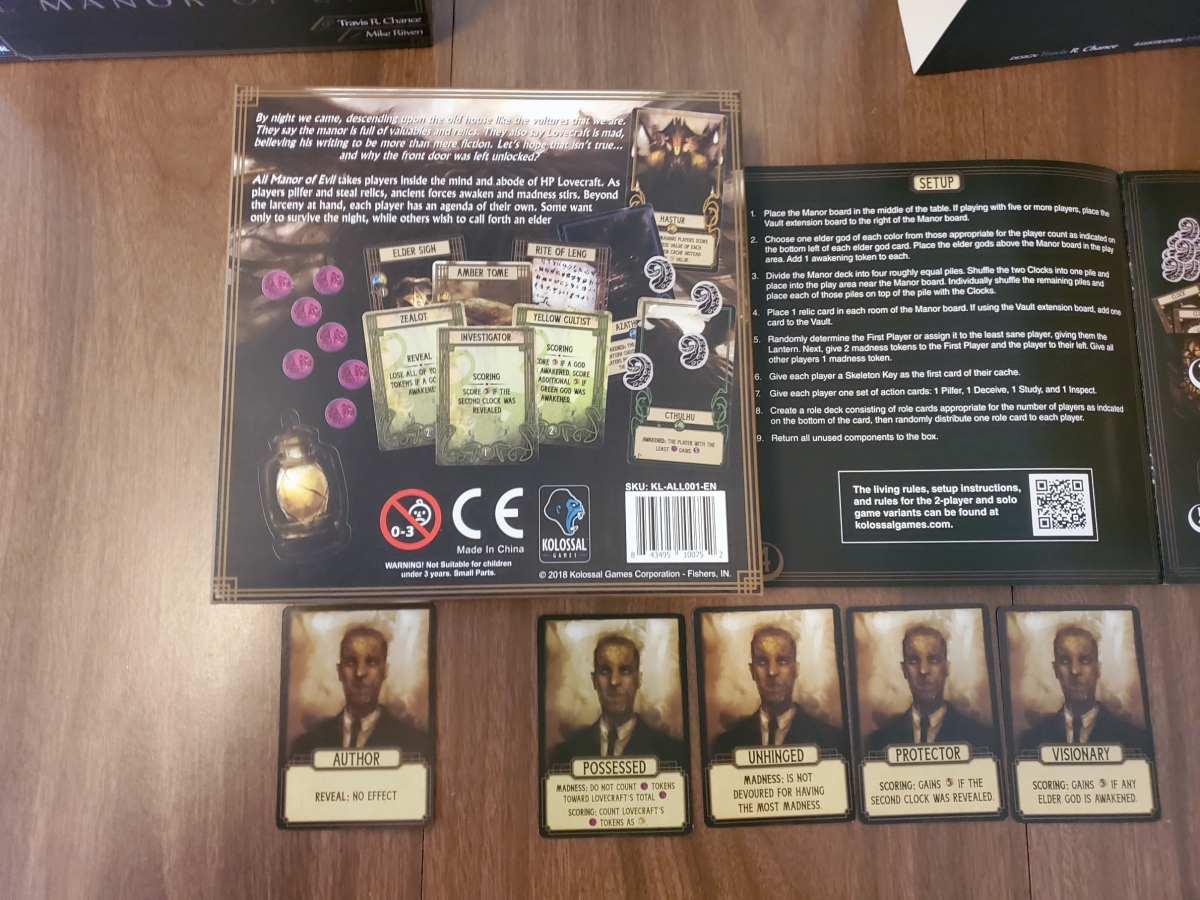 This might be a good time to note that neither the official player count nor average playtime were listed in the (physical) rulebook, nor were they present on the outside of the box. Nothing in the rulebook explicitly says how many players can play the game. In fact, the 1 and 2 player specific game modes weren’t in the physical rulebook at all. Despite the game itself having the dedicated physical cards for those play modes included in the game box, the rules were only available online. 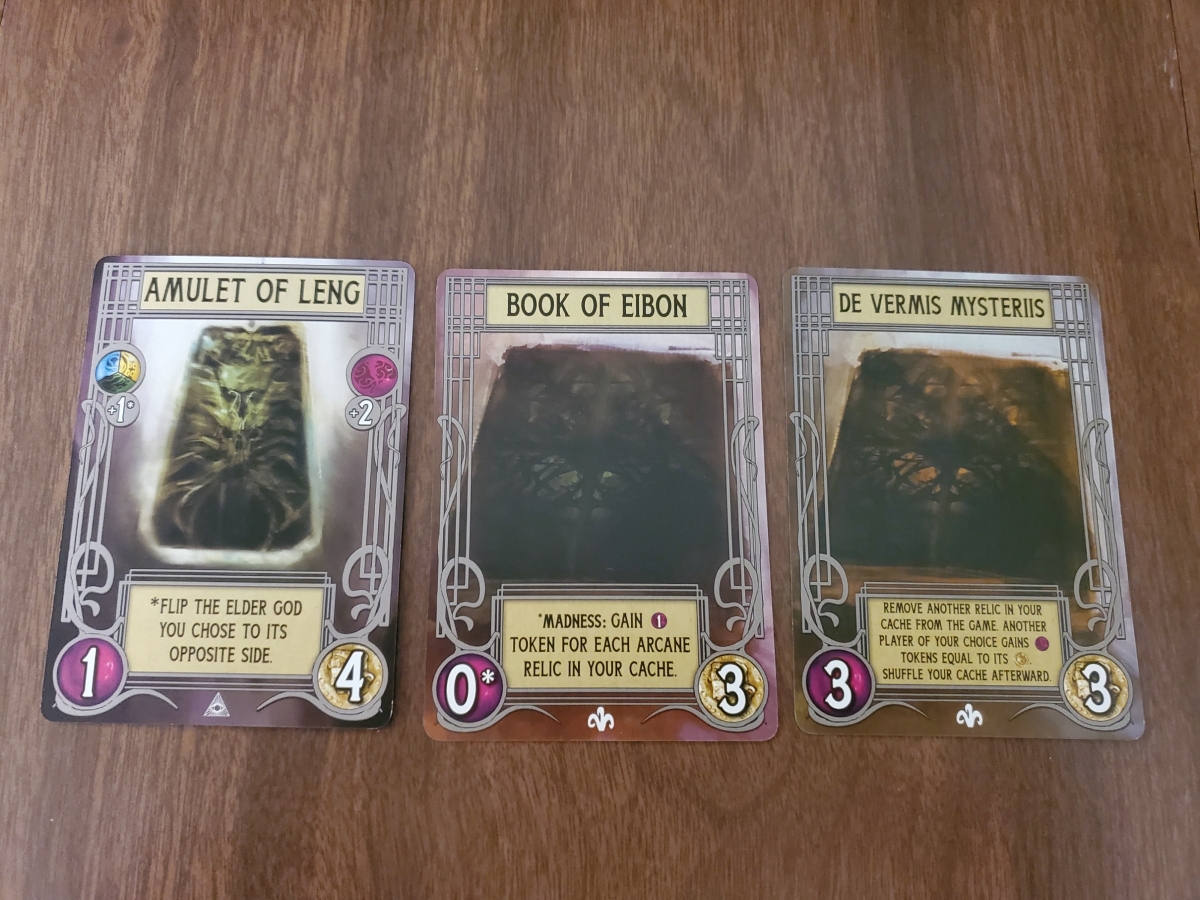 Speaking of the rulebook, the rules (particularly card interactions) are often somewhat soft/vague, leading to discussions around the table about how a situation should be interpreted. For example, the Amulet of Leng instructs you to flip over an Elder God to its other side – but it’s not clear if the other sides of the Elder God cards are supposed to be public knowledge. The Book of Eibon has listed in its special ability text that you gain madness tokens equal to the arcane relics in your cache. While special ability texts are noted by the rules to be resolved when stolen, this text has an asterix seemingly linking it to the end game madness value, and the rulebook explicitly says that “Players can NEVER look through any cache to examine its contents.” The De Vermis Mysteriis runs afoul of that last rule too, as it instructs you to “Remove another relic in your cache from the game.” Are you allowed to look through your cache then, or do you need to pull a relic out of your relic cache blindly?

Soft/vague/non-comprehensive rules aren’t a deal breaker in and of itself. Dune, a game somewhat notorious for occasionally vague or ill-defined power and card interactions, is probably my second favorite game of all time. However, a game with some vague or ill-defined rules needs to have a fairly high level of compelling gameplay, thematics, and/or story to get players invested in the game – and All Manor of Evil just doesn’t have that.

All Manor of Evil’s gameplay is fine – not great, it has no real story of which to speak, and it’s thematics clash with the mechanics. Why are you stealing cursed relics from Lovercraft’s evil manor? Why does Lovecraft have so many iconic and otherworldly relics? Why are there multiple Elder Gods invested in this manor (when part of the point of Lovecraftian or Cosmic Horror is that humans are small and insignificant) – and why is it so easy to awaken them?

Beyond that, the physical rulebook had what seemed like draft/editor placeholder terms and/or inconsistent term/symbol usage. For example, the “$ Value” term was occasionally used as opposed to a picture of the currency symbol, which the rulebook (and all game cards) also used to refer to the same concept. Additionally, the game box and physical rulebook contain errors. 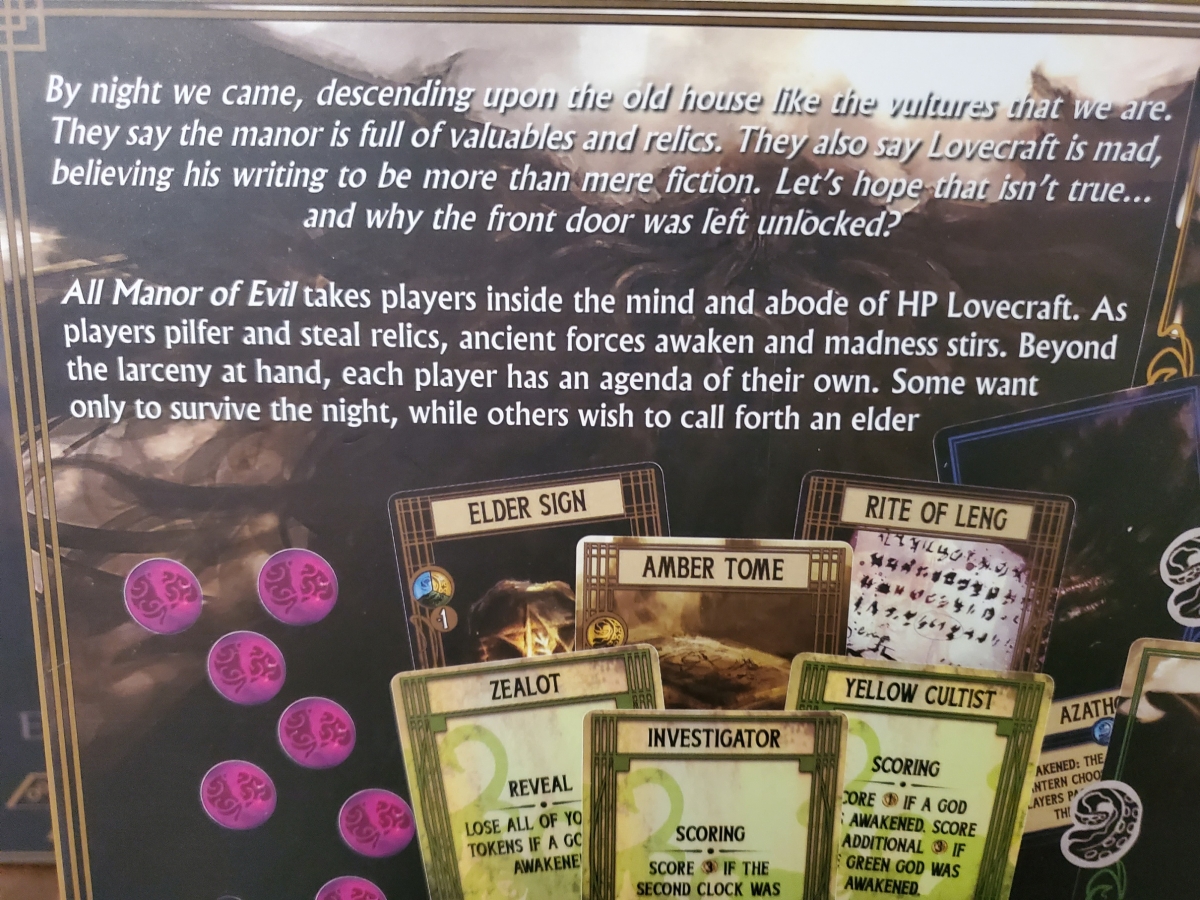 For example, the last sentence on the back of the box just stops abruptly, without any punctuation: “Some want only to survive the night, while others wish to call forth an elder”. Elder what? Another minor issue is that the Vault room used in 5+ player games is included as a separate, single card-sized board; as opposed to being on the normal mansion board with some 5+ player marking.

Additionally, the copy of the game I played did not come with the Skeleton Key relic for the 6th player. (The Skeleton Key is a relic all players start with, presumably so they can use the Deceive action on the first turn.)

I do not know if any of these issues have been rectified in other or later copies of the game.

All Manor of Evil

All Manor of Evil is a fine game suffering from a thematic/mechanics mismatch and production issues. Unfortunately for All Manor of Evil, there are a lot of far better options than “fine” in the contemporary board game era.

Dick Marshall’s love affair with gaming started when he was young, and never stopped. Some of Dick’s earliest memories involve playing chess with his dad and playing Missile Command on the Atari 2600. In a former life, Dick worked as a System Administrator, Software Developer, and Manager - among other things.
Related Articles: All Manor of Evil, Tabletop
Share
Tweet
Share
Submit