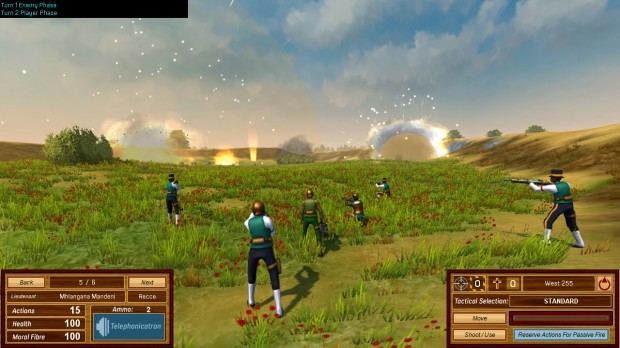 Airship Dragoon is a turn-based strategy game that takes place in the steampunk land of Pangaea. Players must strategically conquer the land with their dirigible and fight on foot, soldier-to-soldier, to slowly conquer the continent and gain victory. The game takes place in a bizarre and loosely understood steampunk reality, and features a structure that requires hours of the player’s time to make any progress in a campaign. It is turn-based strategy at its most hardcore, but also features one of the harshest learning curves and the most alienating game design that I have ever experienced.

The vast majority of the gameplay in Airship Dragoon can be described in three words: slow, complicated, and boring. It took me nearly ninety minutes to figure out how to play, and this was only after a long period of trial and error, followed by me finally giving in and reading the interminable instructions on how to play, which I retained only half of. The game boasts one of the most unfriendly user experiences I have ever beheld, with a labyrinthine series of complex menus to confront at every turn. Once the menus’ appetite for your time is finally sated, then the player can jump into a battle, only to find another harsh learning curve ahead.

The player controls a dirigible and begins assaulting pirate-controlled territories in an attempt to improve their influence, gain a larger control of the supercontinent, and grow their army’s funds, skill, and weapons to improve the player’s chances in battle. The dirigibles do little else other than serve to initiate battles over territories, which take place on land in whichever terrain the player aims to conquer. Players will eventually purchase multiple dirigibles and start to more rapidly conquer the map, but this whole part of the game is more of an objective map than anything else–and a confusing and uninteresting one at that.

Once the player finally figures out enough to enter a battle, the game’s biggest flaw becomes apparent: it simply isn’t a fun experience. The player must move each of their squad members individually, expending actions to move, attack, or interact with things on the battlefield. It’s extremely slow and takes place upon an enormous, largely empty battlefield that has the player running around blindly until they find the opposing force. Once the enemy is found, they take turns shooting at one another and maneuvering the battlefield, which I found frustrating beyond belief. The player can do their best to position their troops strategically and outmaneuver the enemy, but the actual outcome is largely dependent on luck, as your squad will vary from making direct hits and firing about five miles off of their mark. These short combat interactions are actually the game’s strong suit as they are quite tense, but they are only so because of their unpredictable nature. As soon as your characters make a few shots or are taken out by the enemy, then the long stretches of marching blindly across the level resumes.

The game design issues get worse once your soldiers start fleeing battle, emptying their clips blindly and freezing in place in terror all without your permission. This happens only early in the game when your soldiers are still new, but serves to make the game even harder. I played more than a dozen battles before I got even close to winning one, and if I wasn’t reviewing the game, this would have been more than enough for me to give up entirely and never play again. There is a certain charm to how difficult the game is, but once the player becomes somewhat proficient the game gets only slightly more fun, which ultimately makes the time invested not worth the effort.

Eventually, the player will get better soldiers, including robotic ones and more sophisticated weaponry that start to make the game more interesting. The player can use laser beams that fire across the map and mortar fire that bombs large areas of the map. However, getting to this point in the game is not easy, and the payoff involved isn’t high. The player still must submit himself/herself to endless battles that are carbon copies of the last and which never get any more fun to play. That said, it does feel good to progress a bit and upgrade your troops, although it’s always a shame when you lose a veteran troop in battle and must say goodbye to a longtime asset to your team.

For all of the game’s flaws, it is nothing if not a hardcore, immensely complicated strategy game that clearly had a ton of thought and effort poured into it. Hardcore strategy fans with enough patience to learn the game and then sit through its sometimes hour-long turn-based fights will probably praise the game for the same clunky complexity that I disliked it for. The fact that this indie title was created by a single person is mind-blowing and was something that I continually recognized as I played. The game feels like something that was built over several years with much blood, sweat, and tears along the way. Unfortunately, its humble origin was not enough for me to enjoy playing the game at any point during my time with it, and that’s ultimately what matters.

The visuals in Airship Dragoon are pretty awful, but this clearly was the game’s intention to begin with. That said, staring at empty fields and gray corridors for hours never gets any more fun to look at. The music in the game isn’t terrible, but it features about two tracks in total that are enough to drive the player insane after playing for more than a few hours, so I simply elected to play with the sound off. The sound effects are also terrible, but I found that they added some humor to the game, like when your troops get shot and grunt briefly before dying. The aesthetic of the presentation is overall not a strong point, but again, I’m not convinced that this was intended to be a selling point of the title, so I don’t judge it too harshly here.

Airship Dragoon is an experience that I would only recommend to incredibly hardcore strategy fans whom have enough time on their hands to tackle this overwhelmingly complicated beast of a game. With a $20 asking price, the game offers an incredible value as far as longevity goes, but only strategy fans who realize exactly what they’re agreeing to take on should be advised to do so. In the end, this is an indie title that does a lot and comes from so little. It fills a niche that I’m sure will have a following, but it is not for everyone, least of all casual strategy gamers such as myself.