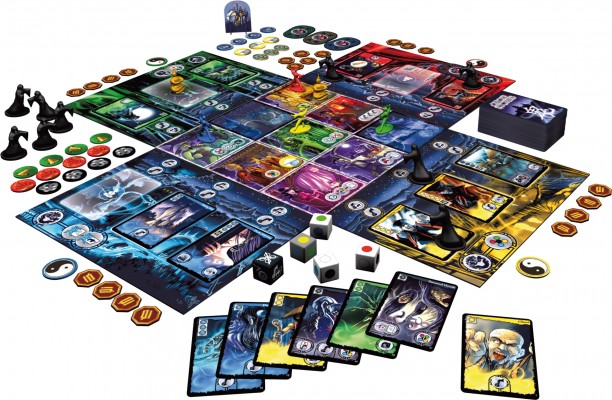 One of my favorite genres in board games is cooperative games. I still remember being amazed at how Shadows over Camelot worked. Everyone had a common objective, working with everyone else to reach it. While I have played several other cooperative games, I eventually heard of Ghost Stories and how difficult it was to beat. Always up for a challenge, I sought it out. However, by the time I started looking for it, I found out that it had gone out of print. While I still looked for copies when I went to board games stores, I figured I would be out of luck to get a copy. Fortunately, Asmodee has reprinted Ghost Stories (and its first expansion White Moon). After getting a copy and trying it out, I was able to see for myself why Ghost Stories is so highly regarded.

In Ghost Stories, the Lord of Nine Hells, Wu-Feng, has discovered the village where the urn containing his ashes is hidden. Up to four people play as Taoist priests, defending the village from abominations attacking on all sides. They’ll need the help of the villagers to defeat the minions and prevent the shadow of Wu-Feng from falling on the land.

The box doesn’t seem to hold a lot of components, but after opening it I could see quite a few components:

To set up Ghost Stories, you lay out a three by three grid of locations. These represent where the priests can go and the assistance they can get from those locations. The four player boards are laid along each edge of the board, with each player using the color of the board in front of them. A deck of ghost cards is shuffled, ten are taken at random, and one of the Wu-Feng incarnations is placed on top of those ten cards, with the rest of the deck placed on top of that. Each player starts with a couple of resources and the game is ready to begin.

Each turn is played in two phases. The first is the Yin phase, where bad stuff happens. Any effects of the ghost cards (whether moving a haunter figure or rolling the curse die) occur during this phase. If there are three ghosts on the game board in front of you, you lose a Qi token. Otherwise draw a ghost from the deck. Most of the game is driven by the ghost cards colored red, green, blue, yellow, or black. If a ghost card is drawn, it needs to go onto the player board of that color unless the three ghost spaces for that color are occupied. Then it goes to another board with room.

Once the Yin phase is done, the Yang phase starts. Here you may move your monk one space, then either try to exorcise the ghost or ask for help from one of the villagers, and then place a Buddha if you got one in a previous turn. The villagers can give you benefits, like Tao tokens which are used for exorcisms. Some of these requests have a price, like causing the curse die to be rolled or drawing another ghost from the deck.

You roll the Tao dice to perform exorcisms. Each color is represented on one of the faces, with a white face on the sixth representing any color. Each ghost has a strength represented by symbols in the upper left. You need to roll at least that number of colors, or supplement the roll with Tao tokens. Some ghosts give you a reward when they are defeated, but others force you to roll the curse die or draw a ghost.

While these rules sound daunting, and they aren’t complete, it took only a few rounds to get a hang of the turns. The symbols on the cards and locations make sense for what they represent. The included cheat sheet shows all of the symbols and gives a detailed explanation for each one, as well as each location. We used this fairly often at the beginning of the first game, but we barely looked at it after our first play.

In Ghost Stories, the situation eventually catches up with you. At first, the ghosts you encounter are easy to handle. If a location gets haunted, it can be turned over later by visiting the correct location. However, if you encounter a ghost that draws another ghost, those three spaces in front of the players can fill up quickly, keeping you on your toes.

Cooperative games can encounter the “alpha gamer” problem, where one player controls everyone’s turn. With all the different options available on a turn, I felt everyone was involved in the discussion of what to do. The unpredictability of the ghosts drawn, the curse die, each player’s special ability, and the previous turn make predicting the next steps nearly impossible, resolving the alpha gamer issue in my experience.

Playing with four people is the ideal option, but rules exist to make it playable with less. The player boards that don’t have a player become neutral, placeholders boards. However, lacking some special abilities can make the game more difficult, so I would highly recommend playing with at least three players if you can’t get the full compliment of four. Playing with two feels diluted.

The game comes with two sheets of bits to punch out. While I didn’t have any problems with the sheet I had, my wife struggled to punch her sheet cleanly. It didn’t affect the pieces, because I used a scissors to trim the excess from the edge. Eventually I may clean the edge further with an X-Acto knife, but the excess won’t affect gameplay.

After playing Ghost Stories I can understand why it has been a highly regarded cooperative game. The randomness of the ghost deck and the way the locations are set up make the game play differently each time. However, the dark theme and mysticism may turn off some players, as well as the difficulty level. If you are a fan of difficult cooperative games and have a group that enjoys playing them as well, then Ghost Stories is a worthy addition to your collection.