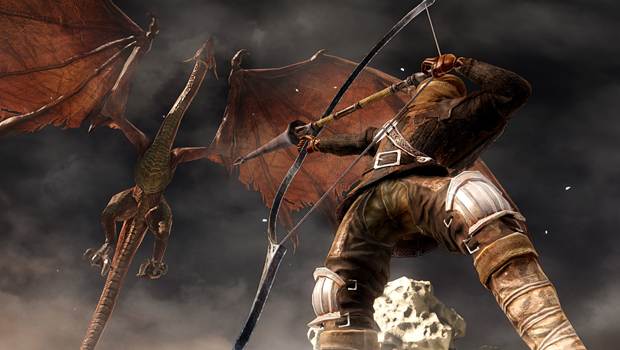 Dark Souls, Demon’s Souls… these are games I fell in love with the moment I played them. So much character they had! Beautifully depressing, their every environment conveying a kind of poetic sadness, set in worlds of decaying kingdoms, fallen heroes and dreams gone dark. Of course, alongside the pathos I also found in these games a wonderful mix of exploration, experimentation with the many weapons and character builds available – and of course, the punishing difficulty. Challenge that felt just painful enough to bring me to the edge of frustration, but not so much that I couldn’t (after perhaps 5 or 10 retries of an encounter) eventually break through with a deep sense of satisfaction. I didn’t really doubt that From Software could deliver yet another worthwhile experience with Dark Souls II, and it turned out my faith was well-founded – the game is fantastic, and a stellar addition to this series.

The story for Dark Souls II is at once familiar in theme, yet distinct in particulars. Without going into detail, let me cover the gist – once again you’re dealing with a kingdom that had a golden age, once upon a time, but which has now fallen on… well. Hard times doesn’t really do it justice. Your task isn’t to save the kingdom – as with Dark Souls and Demon’s Souls, that is a ship which has most decidedly sailed by the time you arrive. No, your task is more to explore a hostile, corrupted world, learning bits and pieces about what things were and what they became, all while dealing with a menagerie of monstrous entities that you’re not so much valiantly standing up to as putting out of their misery. Dark Souls II offers a sullen environment, one that tenaciously clings to life despite being long overdue for death – and you just happen to be a grim reaper with time on your hands.

I gush about the environment and setting of Dark Souls II – what can I say, they set a very unique stage – but that’s really just the tip of the iceberg here. Graphically and acoustically, this is a great game. Lovely art, sculpted environments… sure, the resolution could be a bit higher (and, I imagine, certainly will be higher for the coming PC version) but it’s a minor concern at best. The voice acting in particular really struck a chord with me, and it’s funny how characters with so few speaking roles can nevertheless have such a presence in the game, conveying a sense of emotion and despair to great effect. The takeaway point here is that the game’s audio and visual aspects are pleasing, complete with an evocative soundtrack and beautiful environments that manage to remain diverse despite every one of them having a gloomy, dank aspect to them.

So the story’s top notch, the graphics and sound come together nicely – and that leaves us with gameplay. Dark Souls II has a lot in common with its predecessor – a kind of ‘open world’ that you can explore, though you’ll run into progress gates here and there either in the form of keys you need to find to unlock doors, or the ever-effective issue of just plain having your ass kicked by the locals when you explore a bit too far in the ‘wrong’ direction. Healing flasks are back, as are bonfires that you can light and respawn at – making this, just as the title implies, a true and certain sequel to the previous Dark Souls, being set in the very same world. None of that Final Fantasy ‘these games don’t even have anything to do with each other’ nonsense here! Likewise, the general gameplay remains consistent between the two games – by killing monsters you gather souls, which double as both exp and currency in the game, allowing you to upgrade your stats or buy new equipment and items at the various vendors you’ll discover.

What this all means is that Dark Souls II really feels like Dark Souls with a new environment, a new story, and of course a new spread of gear – but still with enough basic similarities between the two that experienced players won’t feel as if they need to go back and relearn the fundamentals. One thing I noticed is that the controls felt a bit ‘looser’ this time around, making it slightly more difficult to be as precise in the strikes and the turns as I’d like to be – though this is the sort of thing a person can accommodate with a bit of experience and concentration. There’s a suite of new covenants on offer, and just as before they range in focus from being the nice, cheerful co-op partner who’s helping out with the boss kills to invading other players’ games and killing them brutally. Be sure to gesture at them just as their corpses disintegrate altogether! It’s tradition.

Speaking of those boss kills, there’s a heavy amount of bosses on offer in Dark Souls II. Really, it’s perhaps most to-the-point to say that this game takes everything Dark Souls I had and enhances it. You’ll find more plentiful boss fights, somewhat ‘smarter’ common enemies that sometimes know how to deal with the old strafe and slash routine, a good suite of customization options, and of course a big beautiful list of armor, weapons, pyromancy and miracles to pick up. The last is particularly important for those of you who were hoping to pick up Dark Souls II and keep at it through the New Game + modes and the online invasion culture – you have a lot of weapons and equipment at your disposal, and it’s endless fun to tweak and customize your character to perfection, particularly if you plan on invading. Oh, and that aforementioned New Game + mode? It’s quite fun, adding big helpings of difficulty to additional playthroughs, while also upping the rewards you’ll get for taking that plunge.

What more is there to say? For the Dark Souls veteran, Dark Souls II is a worthy successor in every way, providing tremendous fun in ample qualities with a beautiful world jam-packed with replay value. For those of you who are unfamiliar with the ways of Dark Souls, it should be enough to ask – do you enjoy third-person melee combat, the agony of losing a bit of progress on a loss and the rush of finally working your way past a dreadful encounter, and a ton of customizability and replay value – all with a fun co-op and competitive online experience? If the answer is yes, then grab this title, because there’s a reason it was one of the most eagerly anticipated titles to come out this year.

Dark Souls II offers a fresh adventure into what is quite possibly gaming's most punishing, macabre fantasy world. Loaded with enemies to defeat, challenges to meet and tremendous amounts of treasure to collect and enhance, it is everything fans of the first Dark Souls could have reasonably hoped for.