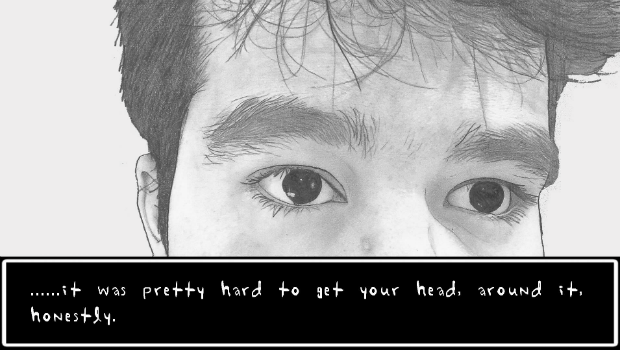 I’ve done some things that, looking back, I may not have been too proud of had it been known outside the seedy apartments I was in. One of my favorites was a dissociative substance found in some cold and cough products. It was easily obtainable, cheap, and I was the perfect amount of bored and stupid to give it a shot.

The first time I took this trip, I laid out on a friend’s backyard porch, steel-like with my eyes transfixed on the night sky. I wondered if I would die, but I was not necessarily concerned if it was occurring. I heard and saw things that briefly appeared, told an entire story in an instant, and then was gone. As crazy as things seemed, they always seemed well within reason.

“Of course this is happening,” I thought to myself, convinced that the decorative boulders in the yard were indeed hiding solid gold cores intended to be secret payment to some nefarious entity. “Everything is normal.”

It is not the moment in One Way Trip, a new “visual novel” game centering around the drug-like, dissociated final hours of humanity, where you realize the characters are having this same reaction to the increasingly bizarre world around them. For me, it was the moment that I suddenly realized the game was manipulating my mind and expectations, making me feel every bit as lost in the ether as I was that night on the porch.

Drug trips are often displayed in TV, film, and video games with grandiose, colorful gauntlets of visual stimuli and psychedelia. The truth that One Way Trip understands is that these experiences are more often docile intrusions of believable nonsense and display them throughout the various versions of the story.

Though One Way Trip does a particularly incredible job of creatively displaying this, the content is much more akin to pulp than high art. The story of two brothers with alcohol, a game to watch, and only tap water as a chaser plays out like a dystopian American Pie designed for teenagers who, in lieu of horniness, are filled with existential dread.

In fact, the main character is a sullen, slack-spined youth named Gordon. Our story starts when Gordon is found watching a documentary on sex robots and drinking tap water by his hyper-intense, dude-tastic brother, Barry.  Barry’s brought Snalcohol, a snail-based liquor, and a desire to watch “Team D” crush “Team C” in “the game.”

From the very beginning, Gordon’s reactions are your own. You can choose to join in or sit back, but either way, Barry’s getting hammered and chases that snail spirit with some of Gordon’s tap water. Suddenly, an announcement on the television from the president declares the unthinkable: all of the Nation’s water supply is poisoned, and all exposed humans have exactly 6 hallucination filled hours left to live.

From there, you begin to meet an increasingly absurd cast of characters, and become exposed to more incredible scenarios that change based on your decisions throughout conversation. You can expand the story and keep moving forward, but after hour six, death awaits.  Discerning what is real and what is not is not the point, however.

In the One Way Trip, there is no true goal,  there is only the trip itself. The game is entirely conversational, so the game spends most of its time just in text and pictures. The other 2% of the game is made up of choosing a target to attack or a place to hide, but there is really no difference between the two functions.

Get ready to push on the D-Pad and the X button a lot. I’ve always avoided storytelling games because I felt they were too sparse, but One Way Trip really takes that concept to the next level.

In addition to the main game, there is an optional game within a game. It is another storytelling adventure that is the same style as well. It is an incredibly docile story when compared to the main game. Characters around Gordon, in the One Way Trip storyline, periodically hand him a gaming device so he can check in on the game and progress further.

The first time into this second story, I played it for about 2 hours before realizing exactly what was going on.  I left a lot of progress unturned, and then ended up getting the secondary game stuck in a loop. That said, I’d think the game within the game is the same size, or larger than the main game itself. That’s pretty incredible.

Characters are 2D and are limited to about 2-3 frames of animation. They move erratically, have strange proportions at times, and just generally act weird. One character named Ricc Rockets, a famed killer who appears to also be a paunch euro-jock, constantly does this motion like he’s lying back in bed, and it looks out of place every single time it happens.

The backgrounds are hand-drawn with what appears to be a series of crude crayon crumbs and colored pencil shavings, but it’s a great stylistic choice. Sometimes a patchwork of patterns, drawings, and other times just simple drawings as rudimentary as they are delightful, each background captures the situation perfectly.

With that, you get text. There is exactly zero voice acting in this game. So you’ll be doing a lot of reading, which can take attention away from the brief action of the characters on screen. The writing quality is a mixed bag, with a lot of juvenile modernisms and cursing split up with some rather poignant one-liners. The sparse nature of the game fits the tone of the story very well.

The most surprising way this is true is with the music of the game. The first moment to the end is a constant soundtrack of chiptune, post-industrial hip-hop, millennial lo-fi folk, and stoner post-rock that is every bit as “outsider” as the genres I’ve assigned it suggest.

Experimental as it is, I loved this soundtrack. A lot. The songs are weird, the sounds are weirder, and the disturbing and sometimes uncomfortable mood that the music creates adds to the confusion and disturbance you should feel in order to fully appreciate what the trip is putting you through. The game has a pretty eclectic soundtrack, but the songs do repeat quite often as you play through, and it can get annoying.

Unfortunately, One Way Trip is plagued with crashes. I actually reinstalled the game because I felt like the number of crashes had to be explained another way, but the problem persisted. The game constantly auto-saves any time you make a significant decision in the game, and then loads the next instance of the story. For example, if you speak with Barry and he asks if you want to drink, choosing to drink or not saves the game, and then loads the appropriate next scene.

I’d say my game crashed about 9 times or so without really ruining things much; I got sent back in the story a few times, but other than that no major flaws.  The 10th time, however, the crash corrupted my save file. Instead of being unloadable, suddenly the file was loading an entirely different scene from an entirely different string of events that as completely unrelated to the story I had been going on. I got a much less desirable outcome, trophy achievement, and beyond all else, I didn’t get to finish the game story I had spent about 10 hours playing through.

This is not just a fatal flaw, it is outright unacceptable. This is the kind of issue that can ruin an otherwise great experience, and my hope is that seeing as how simple the mechanics of One Way Trip are, these issues with crashing can be solved quickly, even potentially with a day one patch. Until that day comes, buyer beware. You may not be able to finish what you started, to your dismay.

If you can stomach the risk then One Way Trip is an exciting art-house style experiment that strikes a chord, and provides numerous outcomes and story diversions, which means hours and hours of play time is more than possible. Considering the drug theme throughout, it is almost fitting that there is potential for fatal error.

One Way Trip is the story of a definite and unjust death sentence, told amongst an eerily realistic dissociative drug trip backdrop that freaked my delicate mind more than once. Basic, disjointed, and tragic, this game strips away almost all functions of a game and makes you a decision maker. Plagued with crashes that can cause fatal errors, One Way Trip does have some improvements to make. With those improvements, and time, One Way Trip is sure to become a cult favorite of the PlayStation 4 age.

Patrick Rost has been with Gaming Trend since 2013. At first focused on sports coverage, Patrick has gone on to cover a wide range of games and other products for the website. Outside of Gaming Trend, Patrick writes and records music, grinds perpetually in Elder Scrolls Online (PS4), and lives day to day with his two dogs, Bob and Stella.
Related Articles: One Way Trip
Share
Tweet
Share
Submit