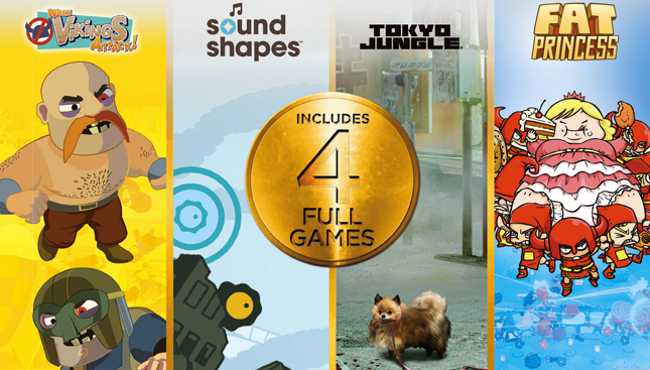 Gaming Trend: We are very excited today as we have the unique opportunity to talk with representatives from each of the games featured in the Best of Playstation Network Volume 1 compilation.  Great time and effort (and no small expense) was made in getting everyone together, and we hope that we can gain some rare insight into each game as a result.  Let’s get started.  First up, we have one of the vikings from When Vikings Attack.  Orthgar, what can you tell us about your game?

GT: Holy…(ducks)  All right.  Let’s calm down now a moment.  We just want some information on your game.

Orthgar: Rrrrrraaaaahhhhh! (attempts to lift a water cooler that has been bolted to the floor)

GT: Okay, I suppose it’s on me, then.  When Vikings Attack is a bit like Pikmin, but more simple-minded.  Basically, Vikings are attacking modern England, and it’s your job to throw stuff at them while they’re trying to do the same to you.  As Orthgar is discovering now, you need a large group to pick up large items, so it’s also important to collect individuals as you run around the pedestrian arenas, while keeping your opponent from doing the same.  Controls are very simple: pick up, throw and an easy-to-forget spin are all the buttons required.  Graphically, the cel-shaded art is appropriately cartoonish, and it all runs very smoothly.

GT: I think he’s strained something.  In single player, while it’s easy to unlock each level, multiple stages to the levels make them seem a little long for what you’re doing. These also significantly up the challenge of the bonus goals (it’s hard to tell how you’re supposed to meet the time limit, exactly, and getting through so many stages without losing any of your little dudes can seem impossible).  Single player is fun, but gets a little stale during long sessions.  But this game seems designed for multiplayer.  The online community is still fairly robust, and matches are a hoot in that chaotic Bomberman way.  However, while some rounds are finished before you can say, “Wait, which one is me?” others can go on for several minutes.  Add to this the fact that a win counts as 1 out of 3 needed for the match and you need three matches to win, these bouts can go on for a little too long.

GT: Oh, Orthgar has tired himself out.  Alright, well, let’s hope we have more luck with our next representative…let’s see here…oh, great.  The pomeranian from Tokyo Jungle.

GT: So, I’m guessing you’re not going to be offering any insights on your game, then?

GT: Who booked these guests?  Fine.  Tokyo Jungle is set in Tokyo after all the animals went bat-guano crazy and turned on all the humans. You get to play the remaining creatures trying to make their way in the big, bad world without becoming kibble.

GT: I don’t actually have any kibble.  Settle down, you’re going to knock your bow loose.  Graphically, the game is a little rough, but it gets the job done.  Sound, too, is functional, which is important, since audio clues are helpful in avoiding danger.

GT: I warned you.  I’m not picking up that bow, so get used to it..  Gameplay is intense and unique as you try to to make it to your next food source, while marking your territories and building up your experience to a level that a mate will find attractive, then getting to a nest and, um, making a litter that will head out anew. This is certainly the quirkiest game of the collection (which includes a princes fattening simulator and vikings rampaging modern London), and that even applies to the menu system. There’s a Story Mode here, but to move along in it, you have to get better and better in the endless Survival Mode, finding data drives in expanded territories that tell you more about what happened to the humans.  It’s odd, but certainly fun.

Pom: (leaps across the room in a clean kill) Yip.

GT:  Ahhhh!  My toe.  Fine, here’s your bow. While someone gets me a bandaid, let’s move on to an educated human being, a noble no less, who can certainly hold a conversation. I must say, Princess, you are far slimmer in person.

GT: I was thinking ahead here, you’ll find some cake right there on the table.

GT:  Oh, for the love of…stop eating the Princess’s cake!

GT: Someone get the dog to stop lapping at my bloody toe and get the Princess a cake?  Where’s my bandaid?  Is someone getting me a bandaid?

Circle: As you’re indisposed, shall I take over the proceedings?

GT: Who’re…you’re a circle. With a little dot. You look like an eye.  Hello, eye…

Circle: Hello. I am indeed a circle. I am also quite capable of describing my own game, and if it will ease your burden, I might elucidate the reader on that of the porcine petite potentate as well.

Circle:  Yes, you lie down for a tick.  Dear reader, let’s you and I go where it’s less noisy, shall we? (opening door to the Gaming Trend solarium)  Ah, this is lovely. Now then, Fat Princess is certainly the most popular game of the collection, although, I might humbly add, not the best reviewed.  In a similar fashion to When Vikings Attack, the animation style is bright and colorful, and things move fairly smoothly, despite there being quite a lot happening on screen.  The reason for this is the chaotic multiplayer nature of the game.  You don a hat to choose a role, such as warrior, wizard, builder and the like, then head outside the safety of your castle to forage, fight or attempt to steal the opponent’s princess.  The latter is made even more challenging when the villains have been stuffing her to the brim with cake to make her heavier.  This creates a need for Pikmin like strategy of accomplice-gathering, again, much like in the Viking game.  The single player has a little bit of a story, but feels mostly like a bot-filled sampler to tease the different multiplayer modes.  The gameplay can make you feel like you’re chiseling away at a mountain, as you’re frequently thwarted long before even coming close to the location of your task.  However, the speed of your revival makes the Sisyphean task totally entertaining.

GT: (opening door to solarium and crawling in) I didn’t even know this was here.

GT: (closing the door) Did I just hear you use Sisyphus as a reference?

Circle: I’ll just talk about my game, then?  I’ll take that drool to be a yes. Sound Shapes is a platformer in the sense that you’ll be jumping around, collecting things while attempting to reach the end of a level, but it is so much more.  For me, it is a pleasure to move through the colorful, abstract art of each level to see what designers like Beck or the gentleman who created Sword & Sworcery have in store for me both physically and aurally.  You see, each icon you collect adds a bit to the soundtrack – a beat here, a strum there.  This is not only pleasant to the ear, it gives a unique sense of progression as I move through a level.  It doesn’t take me a lot of time to reach the end, nor is it overly challenging, but it’s such a pleasant experience that it elevates my task as a whole and inspires you, as a player, to create.  Fortunately, they’ve included an easy-to-use level creation element, which is so satisfying to experiment with that many are doing so on a regular basis.  There is a staggering plethora of levels to be found online.

GT: cough…which brings us to a problem with this compilation as a whole.

GT: No, I need serious medical help.  I believe I was born with a major artery in my toe.  However, it’s my duty to review this compilation, and I will do so.  The games here are all a lot of fun, to be sure.  The weakest is When Vikings Attack, and even that one I would rate at around 70%.

Circle: And any way to get all of these games into one’s home is surely a good one.  Ends justify the means and all that?

GT: In a way, but buying the disc version of these games doesn’t give much of a discount, and actually costs quite a bit more if you factor in the various discounts that have been offered since their release on the Playstation Store (especially if you’re a member of Playstation Plus).  Typically, this kind of retail disc would be for someone who doesn’t have access to the online store, then.  But every one of these games has an online component.  Only Tokyo Jungle doesn’t add much when going online.  Sound Shapes adds a possibly infinite number of levels from clever people.  And When Vikings Attack and Fat Princess almost require online. They both have single player components, but the real fun for both is found with other humans.  So is it for people who don’t have a lot of room on their Playstion 3 hard drives?  No, because all of the games install to the HDD. There aren’t even any perks or differences to getting the disc version.  When Vikings Attack is listed as the “Best of Playstation Network Volume 1 Edition”, but I couldn’t find any info on the differences (nor did it seem different from the original version I played). There aren’t even menus.  The disc is just a delivery system for the games. The whole thing may just be a method of cheap advertising at best or at worst a cash grab.

Circle: Speaking as a representative for one of the games, I say that’s a good thing, and you should shut your mouth. (jumps on the head of Gaming Trend, who falls to the ground) If you don’t have these games yet, this is a perfectly sensible way to get them, but, really, you should make sure you have online access to enjoy them to the fullest.