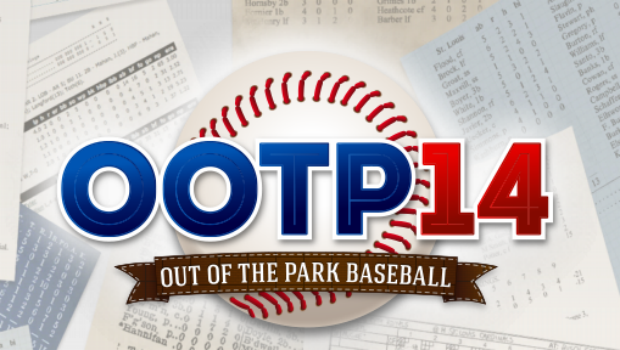 Not everyone out there is going to be as excited as this reviewer to play Out of the Park Baseball 14, the latest super-sim baseball “statstravaganza” from Out of the Park Development. But those special folk out there who live for offseason player movement and development, rummaging through pages of stats and comparisons, and the subtlety of smart lineups and game preparation are in for the tastiest treat of their gaming life.

Rather than a typical experience of being an athlete, OOTP14 provides a fully immersive managerial experience, handing players control of line-ups, trades, call-ups, demotions, scouting, and all other tasks performed by the masterminds who make the great teams great. Players can choose to play in the modern day or in any historical season from 1871 on, using real-life transactions or mapping their own. Players from every era can be fantasy drafted into the current MLB, allowing players to see how Nolan Ryan would do in the Majors today. Players can choose to manage a team at the level appropriate to them, from handling the substitutions for AAA Arkansas to being an unfireable GM for the powerhouse Yankees.

[singlepic id=11617 w=320 h=240 float=left]Before each game, players read news and look over their business for the day, which could include bullpen changes, trades, or free agent signings among other tasks. The game itself is managed by the player, either on an at-bat or pitch-by-pitch basis, and afterwards players can write a journalistic recap of their team’s performance on the diamond. Between tasks in the loading screens are various facts and quotes about baseball, a veritable encyclopedia of baseball’s historical quips. These make the loading screens, which are typically short anyway, enjoyable rather than intrusive.

While the logos and stadiums of MLB teams aren’t licensed, the rosters are authentic and up-to-date. The MLB assets and other modifications are only a click away from the game’s homepage, provided by a team of dedicated OOTP fans and players working as a community to improve the experience for all. These and many other modifications make for an even deeper OOTP game through user teamwork.

[singlepic id=11618 w=320 h=240 float=right]The game itself hasn’t changed much from last year, a basic keystroke super-simulation with textual representation of players on an image of a field. It’s not real sexy but it gets the job done and looks nice enough without being flashy, and its graphical drawbacks have little bearing in the quality of the game. However, the models of players faces and heads looks better than what is seen in many EA sports titles, without the benefit of hyper-realistic capabilities.

For the latest edition, OOTP Developments has recoded the player origins, expanding international and amateur league scouting and the first-year player draft. Also changed are the character creation and development system, allowing for smarter career arcs and stats and better long-term development of players who often switch positions as their ages progress. Also improved is the AI for trading, negotiating, and evaluation, as well as new play-by-play commentary and improved depth charts.

[singlepic id=11619 w=320 h=240 float=left]The best part of the OOTP14 experience, in this reviewer’s opinion, is the acceptance that bad or unscrupulous things do happen in the world of sport. Players will be given long suspensions for fighting, or be caught cheating or lying about their age, or any number of other real-world sports issues that never come up in the sugar-coated major market sports titles. With an entire era in their historical section named “The Juiced Years”, its clear that the people at OOTP Developments are dedicated to embracing the reality of sport, rather than running from it.

Once you get comfortable with all of the options and screens and start to get the ball rolling on a season, you’ll get the chance to reveal just what fun options this game allows. One of the first things I was able to do was play the 1916 season as the Red Sox, changing Babe Ruth to a hitter and changing the entire trajectory of the Yankee and Red Sox organization. What if Hank Aaron played in the steroid era? Who would get the upper hand in a matchup between Ted Williams and Justin Verlander? OOTP14 allows players to answer those questions and countless others with painstaking accuracy.

[singlepic id=11621 w=320 h=240 float=left]The game does have a few drawbacks that mostly stem from the format. The simulations take a good chunk of time to finish and can grow monotonous upon your fourth or fifth game in the day. The sounds of the game are pretty elementary as well, with a standard bat crack, a tepid crowd ambience, and Super Nintendo reminiscent “Your Out!” and “Safe!” calls from the umpire. The menus can be hard to navigate and suffer from a simple glut of options. Lastly, in a game that focuses on bringing you every aspect of real baseball, a lack of player agents stands out. A number of scenarios can play out with agents doing the negotiating for players, including favoritism, loyalty, or agent-swapping.

Out of the Park Baseball 14 has multiple modes of play, and also allows online leagues, letting players group together and manage their respective teams competitively. Players can brag to other players through recaps of big games and share the experience of season building and managing with friends. With thousands of real season scenarios and the freedom to completely create your own baseball world, there is infinite ways to play and replay.

No frills, no gimmicks, no nonsense, Out of the Park Baseball 14 is such a true-to-form sports experience that its complicated gameplay and plain-jane delivery becomes refreshing and exciting in a world of big graphical spectacles. While OOTP will never take the place of games like The Show and MLB 2k, it can supplement those gaming experiences and provide a different take on what the baseball world is all about. Playing this game will make you beg to the heavens for a basketball or football simulation with the same attention to detail and authenticity provided in OOTP. Fantastically fun and perfectly challenging, Out of the Park Baseball 14 is a must own for any baseball wonk.