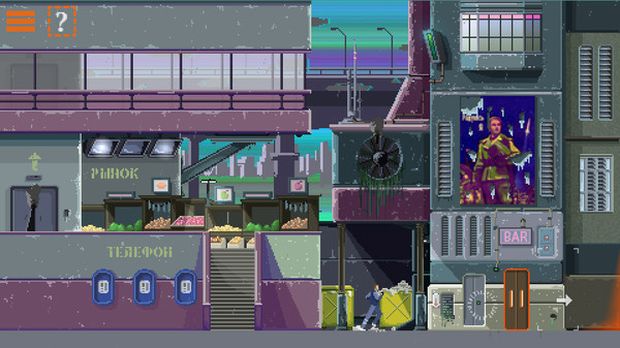 A lot of indie games take inspiration from the classics, particularly from the 8-bit through 16-bit era.  DreamBreak, a cyberpunk, point-and-click adventure game recently released on Steam, doesn’t just feel like a game inspired by the old Sierra adventure games, such as Space Quest and King’s Quest, it actually feels like a game designed and produced in that era.  While it’s nice to see a game that captures that feeling of nostalgia by perfectly recreating a long-dead genre, DreamBreak still has some issues of its own that prevent it from greatness.

The game is set in a cyberpunk Soviet Union, where revolutionaries have begun an attempt to rise up against the corrupt government.  You play as Eugene, a janitor, who finds himself entangled in the revolutionary plot.  As classic adventure games go, it’s pretty familiar territory, with the everyman finding himself at the center of the conflict very quickly.  While the story is alright, if a little familiar, I found that each of the possible endings were a little disappointing, as they didn’t provide much of a sense of closure beyond “the game is over now.”  The “evil” ending in particular was disappointment, as it’s signposted as the wrong choice so blatantly that there’s no reason to pick it other than completionism.

The basic gameplay of DreamBreak will be familiar to anyone who’s ever played a point-and-click adventure game.  It’s entirely controlled by the mouse, so you click to move, pick up objects, interact with buttons and control panels, and other standard adventure game tasks.  There are a few changes made to cut down on the pixel-hunting element that plagued so many games of the era, namely that all interactable objects are a bright orange color.  In a game set in a world with so many computer monitors and brightly lit buttons, this helps by making sure you never have to stop to figure out which is the one you’re allowed to interact with.

The puzzles in DreamBreak are mostly confined to small areas, with very few based on inventory management.  The focus on single rooms and constant sense of progression with little backtracking ensures that the game maintains a strong forward momentum, and at less than two hours, the game never feels padded or in danger of overstaying its welcome.  If you’re interested, there are collectables that you can seek out for 100% completion, but most of them are easy enough to find that getting them all on the first playthrough won’t be much of a challenge.

There are also a few arcade sequences, and while some of them do a good job of changing up the levels, an equal amount are just annoying. The basic gunplay, which consists of shooting and using your forcefield to block enemy shots, is fun once you get the hang of it, and later sections add in more difficult enemies with different tactics.  There’s also a total of four different vehicle sections, each with slightly different controls. However, the last of these is easily the worst section in the game because the controls don’t work as explained.  The others are a mixed bag, with some controlling solidly and others just serving as a way to kill time before the next level.

In addition to some issues with the controls in DreamBreak that feel as though they could have used a bit more testing as I encountered a lot of crashes, frozen screens, and other glitches during the game’s less than two hour runtime.  While there have already been updates and bug fixes since I downloaded the game, I still encountered some of the same ones while replaying the ending.  Given that simple actions such as pressing two switches out of order freezes the game, it’s hard to believe no one noticed these bugs before release.

DreamBreak is a short, relatively easy trip down memory lane for anyone who grew up playing point-and-click adventure games. While it has plenty of rough edges and won’t hold your attention for much longer than the end credits, it’s a good game to play through in an afternoon, with well-designed puzzles and surprisingly engaging combat. Just be warned that there are a lot of bugs near the end.