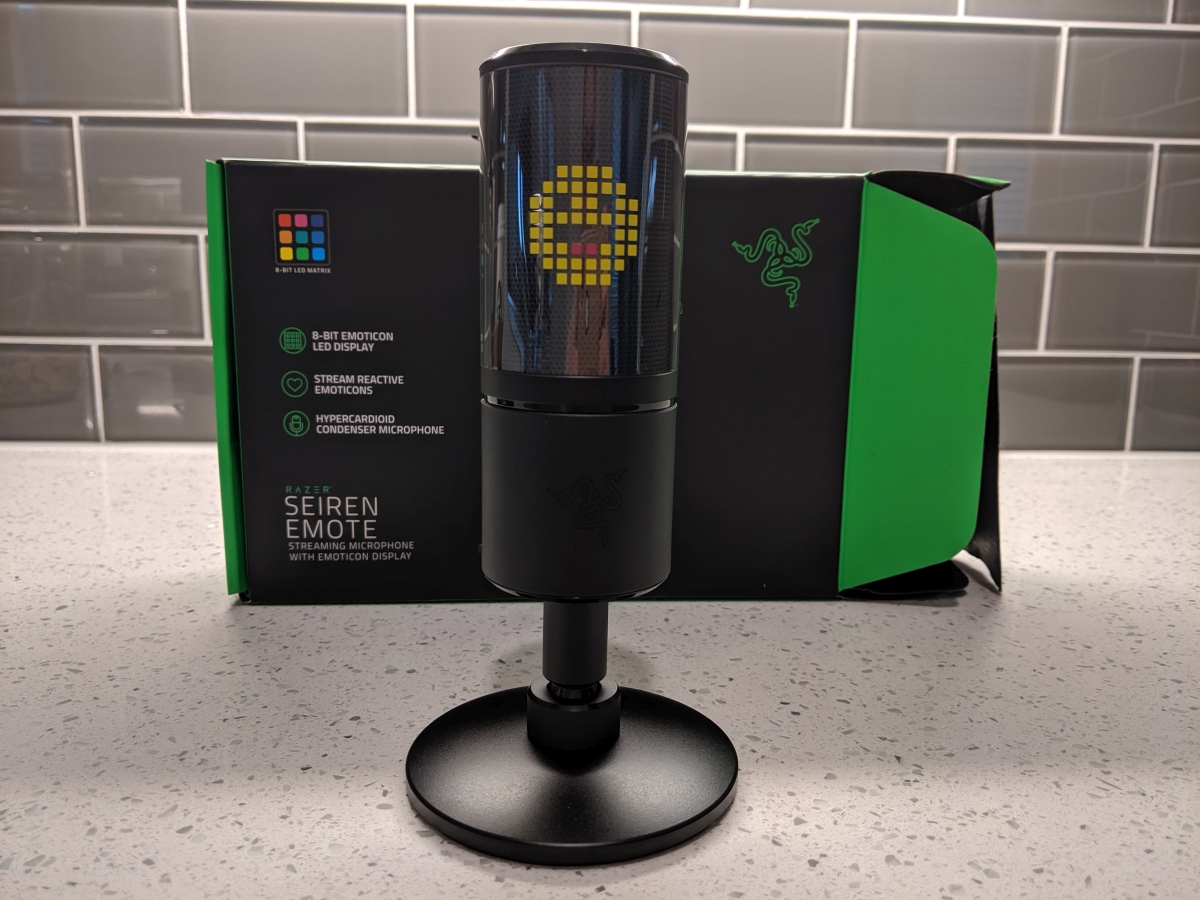 I got my hands on the Razer Seiren Emote mic the day it launched at TwitchCon. I’ve been playing around with it ever since, trying to decide what I really think about it. There is no doubt that it is pretty, flashy, and fun…when it works properly.

I stream regularly for both my own Twitch channel (twitch.tv/eliizabella) and for Gaming Trend (twitch.tv/GamingTrend), and while I’ll admit that the Seiren Emote has some fun features, a lot of them are lost on smaller streamers like me. The point of this microphone is to have your fans interact with you on your stream, and certain interactions trigger specific emoticons that light up on the microphone for your viewers to see. You can program tons of things, from subs, to donations, to keywords. Maybe I am just old, but all of this just seems so pointless to me. While I know this is a HUGE market, and a lot of people will appreciate this product, it just seems niche and gimmicky to me.

I’ll say up front, the price tag alone is a bit daunting, coming in at $179.99. If you want to know how the Emote microphone sounds, check out the short video above, and to save yourself some time, check out my recent review of the Razer Seiren X microphone, which is the same base mic as the Emote, minus all the bells and whistles.

When you look at the Emote’s sound quality, you can compare it to the Seiren X because it is literally identical. The only addition to the Emote microphone itself is a gooseneck extender for the base, which is nice. If you’re looking to get a decent entry level streaming mic, the Seiren X is $100 dollars cheaper and doesn’t have the emoticon lights on it, but it’s THE SAME MIC.

I also ran into the exact same problem with sound quality as I did with the Seiren X with the Emote. When I placed it on my desk a few feet away, people had a hard time hearing me, especially when game noises were on in the background. I attached it to my microphone arm, and the sound is great now. I can’t say it enough, this is the exact same microphone as the Seiren X, so it has a nice sleek design, small profile, hypercardioid pattern, micro USB, and easy setup. Until you get to the emoticon stuff….

This is where I got frustrated with the Emote. Not only do you have to download Razer’s software to run their products, you have to download ANOTHER program, the Streamer Companion App, to use the emoticons. I hate bloatware, and I hate having to have unnecessary programs in the background when I game. The Streamer Companion App allows you to set up all your alerts, and also allows you to create your own custom emoticons. Which is pretty cool. But half the time they would disappear the next time I opened the software up. A handful of times, I couldn’t even test my designs on the mic because nothing ever lit up.

The real kicker was that there didn’t seem to be any specific reason for it to decide to work or not. I wanted to fire it up for a livestream to test it out, and the emoticon lights would not turn on. Even with both the Razer Synapse App, and the Streamer Companion App open. After playing with it for close to an hour, I called my tech savvy husband in (which I should have done to start with) and it continued to baffle him for close to half an hour. Then, after restarting the Streamer Companion App for the SIXTH time, it suddenly just…worked. No rhyme or reason to it. You can check out the livestream test below, but be warned there is plenty of bad language in it.

During the livestream, I had my Editor-In-Chief test the numerous things that I had pre-programmed to trigger the emoticons, and either they didn’t work as intended, or it looked so crappy on the camera that it didn’t matter. I am sure a better setup, and bringing the mic closer to the webcam would help, but honestly, at this point I was so frustrated with the mic I didn’t care.

As I sit here trying to finalize this review, I have restarted my computer four times, unplugged the mic countless times, and restarted the Razer Streamer Companion App easily over ten times. I cannot get the emoticon lights to work for a quick demo video. So, I am sad to say that the up close and personal images I wanted to get for you guys aren’t going to happen.

The Razer Emote mic has been nothing but a lesson in frustration for me, and I am perfectly fine using this as just a base desktop mic, since I shipped the Seiren X off to a GT colleague. I honestly don’t care if this thing ever lights up or not. The sound quality is fine, if you mount it on an arm close to your body. I am sure a dedicated streamer that is willing to fiddle with it enough, and has a big enough audience to make a difference might find this fun, but for me…I’ll pass. As stated at the beginning, the Emote is pretty, flashy, and fun…but do we really need all of that, when all you really want is a mic that works properly? 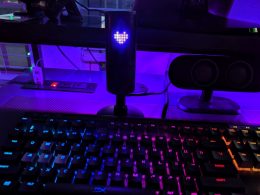 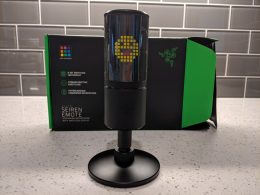 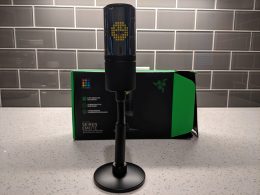 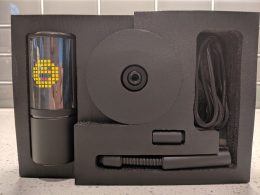 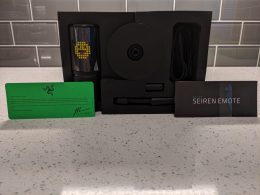 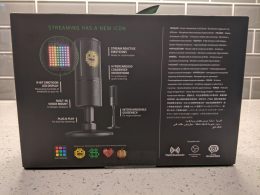 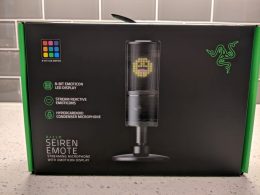 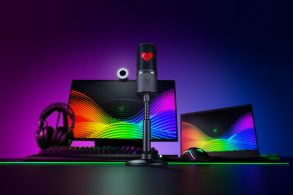 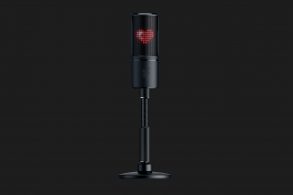 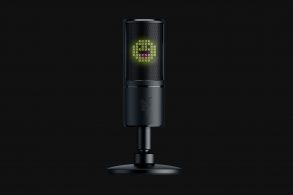 This product is so gimmicky and so niche, with such a huge price tag that I really can’t see anyone except the big-time streamer justifying a purchase. It’s a neat idea that could use a lot of tweaking, and I am sure in time the product will evolve. But for now, save your money. If you’re looking to buy a Razer desktop mic, the Seiren X is the way to go for less than half the price.

Holly Hudspeth is a best-selling author living in Fort Worth, Texas. She has six published novels to date; The Skyy Huntington Series, which is an epic dark fantasy adventure, and One Small Detail, a stand-alone medieval fantasy. Holly also enjoys writing fan fiction based on her avatars from games such as EverQuest, Elder Scrolls Online, and World of Warcraft. Her first major purchase at the established age of nine was the NES, and she has been gaming ever since. She enjoys fantasy games, city builders, RPGs, MMOs, SMITE, and The Sims franchise. Most nights she is in SMITE with her husband and friends, or playing ESO. When she isn't gaming, she is probably either at Disney or planning her next trip there.
Related Articles: Hardware, Razer Seiren Emote
Share
Tweet
Share
Submit