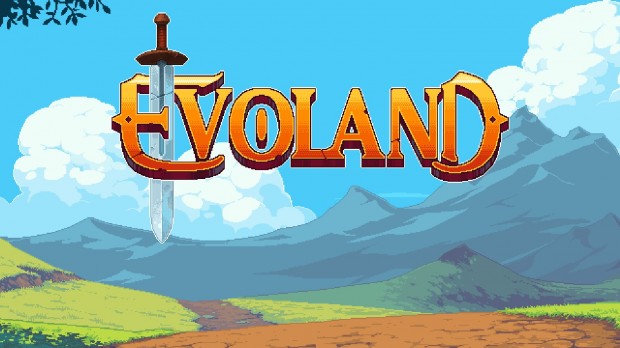 Evoland’s page on Steam describes itself as “a journey through the history of action/adventure gaming.” That right there gives away Evoland’s hook: as you play the game, you’ll move from primitive calculator graphics to the glorious 3D you’d expect to see in a JRPG from the late 90s. It’s a neat concept, which is what makes it all the more lamentable that Evoland doesn’t have a lot of substance beneath the references and throwbacks.

Evoland claims to be a retrospective of the history of RPGs, but in actuality it’s focused tightly on four specific games: The Legend of Zelda, Dragon Warrior, Final Fantasy VII and Diablo. There are other games that get referenced from time to time, like Super Mario Bros, but for the most part the game attempts to recreate each of those four games, in that order.

[singlepic id=11640 w=320 h=240 float=left]The earliest sections look and feel exactly like early Zelda games, down to the octopi that lumber around the map and “heart bar” the Zelda series made famous. This part of the game, and the occasional callback to it later, were the highlights of the game for me. You’ll quickly learn that opening chests will reward you with updated controls, better graphics, enhanced sound, or other goodies. In these earliest sections the game moves forward through RPG history fairly quickly, meaning you never have time to really examine the cracks in the game’s exterior.

Once I reached the later parts of the game, though, I quickly found my amusement and wonder buried under frustration. About 45 minutes in, Evoland introduces a turn-based battle system, and this is the biggest flaw the developers could have made. The system looks like it’s been ripped right out of Final Fantasy, but it lacks any of the depth that make Square’s systems workable. Your character has only one attack and lots of HP. What this means is that the battles are incredibly shallow and incredibly easy—there is nothing to engage the player. If these turn based battles were rare, I could probably have forgiven Evoland, but they’re annoyingly, horribly common.[singlepic id=11641 w=320 h=240 float=right]

A few minutes later, you reach the one and only town in Evoland, which signifies the transition into the Final Fantasy VII section of the game. It’s during this section that the game’s narrative shortcomings bubble to the surface. The “story” in Evoland is little more than the Cliff’s Notes of Final Fantasy VII. There’s even a young, innocent girl you spend a few hours with, who’s only purpose is to be killed by the Bad Guy. The best (read: worst) part? Her name is “Kaeris.” Those of you who can rhyme should be palming your faces right about now.   The story in Evoland isn’t bad—to be bad it has to exist.

[singlepic id=11639 w=320 h=240 float=left]If nothing else, Evoland does present an attractive face to the world. The visuals are perfectly designed to evoke the classic games you loved in your younger days, and the sections focusing on the Legend of Zelda are especially true to their inspiration. Later sections look less like Diablo than Golden Sun, but with their bright, saturated colors they still look pretty good. Audio, on the other hand, is merely adequate. It isn’t terrible, but you aren’t going to hear anything as catchy as the opening theme of Zelda or the music in Dragon Warrior.

Evoland is clearly a game with a goal: to appeal to fans of early 90s Nintendo RPGs. I can relate to that—I love those games, too. But Evoland goes too far. There is nothing of substance underneath the throwbacks and references. That’s really the shame of it all, because the best parts of the game come when the developers unshackle themselves from recreating older games. The highlight of the game is a series of puzzles mixing time travel and perspective-changing mechanics. It was fun! It was original! But it was also extremely short-lived.[singlepic id=11637 w=320 h=240 float=right]

The reason you’re reading this review is because you ostensibly want to know whether to buy this game or not. Unfortunately I’m going to have to recommend a pass—at least on paying the full retail price of $10. The real deal-killer here is the runtime, which is best measured on a stopwatch. I understand that Evoland was developed at Ludum Dare, a devloper competition, but asking 10 bucks for 2 hours of gameplay is a bit steep. If you find the game on sale for $2 or $3, it might be worth a go, but the problem is that even at that low price there are better, more ambitious games you can play; games that move the industry into the future instead of slavishly trying to recreate the past.