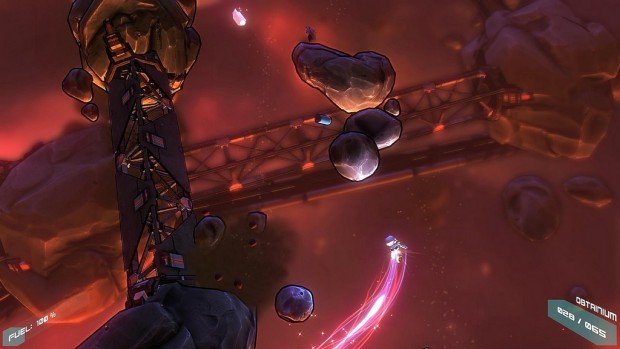 There are some games you come across in this industry that manage to merge two seemingly conflicting ideas to great effect. Likewise, there are some concepts that, when mashed together, prove disastrous in execution. Like a peanut butter and gravy sandwich, Lost Orbit is a game that is mostly entertaining, but will sometimes seem like an odd pairing of ideas.

At its core, Lost Orbit is a game focused on providing moments of speed, adrenaline and quick reflexes. Players control Harrison, an astronaut attempting to make his way back to Earth after finding himself stranded in space. Using Harrison’s thrusters, the goal is to blast your way to the end of each stage while dodging space debris and other hazards. The end experience will have players zipping around the galaxy, hitting speed boosts and narrowly avoiding obstacles in an effort to finish each stage as quickly and stylishly as possible.

Along the way, players are encouraged to find collectibles, known as “obtanium”, which can be used to purchase upgrades that will greatly increase efficiency. Sure, stages can be completed with the minimum amount of effort and upgrades if you choose to play slowly and carefully, but that goes against the point of the game; the real fun lies in those moments of fast-paced maneuvers around danger. So the more upgrades you purchase, the more you’ll get to the heart of the game. While some of the upgrades provided abilities such as barrel rolls and bombs (which I rarely remembered to use, although I probably should have), other upgrades that focused on maximum speed and the rate of boost refill became much more essential to the overall experience. Depending on how much obtanium players acquire, how many times they died, and how quickly they reached the goal, a medal can be earned which rewards them with even more obtanium. It all makes for an experience focused on racing to the end of each stage with as few mistakes as possible.

With the game’s emphasis being on those moments of quick thinking and dodging, you can imagine that the game starts off a little slow before you’ve acquired any of the upgrades to get to that point. The controls also take a little getting used to, as turning in either direction is done as if from Harrison’s point of view and not the top-down view of the player. This proved to be an efficient control set in the grand scheme of things, especially as levels become more complicated, but players will probably find themselves accidentally turning the wrong direction once or twice as they get used to the controls. It’s also worth noting that Harrison’s turning radius is somewhat wide, causing me to make a few fatal miscalculations when expecting to turn on a dime for a piece of missed obtanium, only to smash into an asteroid.

On the subject of crashing, deaths are quite common in Lost Orbit. The risk-vs-reward factor of speeding through each level encourages a lot of split-second decisions, which in turn is bound to cause plenty of crashes. Like a bug on a windshield, the comical animation of seeing Harrison splatter against space rocks will be frequent across the game’s 40+ stage campaign. Restarting from a checkpoint can thankfully be done instantaneously with the press of the X button, putting players right back into the action, but there are several chunks of the game where you can expect to retry the same sections over and over in an effort to nail a perfect run, while nabbing all collectibles and weaving between obstacles at high speed. Because of the game’s ability to throw you right back in, coupled with the plentiful moments of fast adrenaline, dying never really feels frustrating, even with how often it occurs; there’s always another frantic moment right around the corner.

The other major pillar in Lost Orbit focuses on the game’s humanizing story. Early in the game, Harrison encounters a space probe named Atley, who serves as a narrator throughout the campaign. The stories told from Atley’s point of view range from lighthearted tales of Harrison’s past to more solemn moments of hardship and desperation for rescue. All of these narrations help to provide characterization, in effort to put players into the mindset of Harrison as he struggles to survive.

The problem is that the dialogue sometimes seem to clash with the action on screen. Whereas the moment-to-moment gameplay has players exercising lightning-fast reflexes in epic combos, the narrator oftentimes conveys a much more grounded feel through the story he tells. It feels like an odd mash-up when you become so focused on avoiding collisions at high speed, yet there’s someone in the background trying to have a serious conversation. This is especially jarring when coupled with the silly (and frequent) death animations the game employs to lighten the mood. It never actually gets in the way, but the basic dodge-‘em-up gameplay seems like a strange pairing with the heavy tone of Lost Orbit’s story.

As far as visuals go, Lost Orbit has a fun aesthetic. The characters and space debris all have a cartoonish cel-shadedappearance along with bold outlines, not unlike Borderlands. It may not be jaw-droppingly beautiful, but the colors are bright and all of the game’s important on-screen objects, like characters and debris, stand out well on the mostly monotone backgrounds. The art style works well for a game of this type.

Lost Orbit may have an odd pairing of concepts, but at its core lies a fun and fast-paced adventure. The way that Harrison’s story unfolds during the frantic gameplay occasionally seems to clash, but it never gets in the way of the core moments of exhilaration. There’s a few dull moments along the way, specifically towards the beginning, but once you get the hang of it, zipping across the galaxy becomes a blast to play. You’ll die a lot, but the action is so common that you’ll keep coming back for more. Looks like that peanut butter and gravy sandwich isn’t so bad, after all.

Lost Orbit is fast-paced, adrenaline-filled fun with a story that, while entertaining, feels like an odd pairing to its gameplay.

Gaming Trend's resident amiibo collector, Matt's a lifelong gamer with a soft spot for Nintendo. As a new father, Matt often struggles to stay as involved as he has been in years past but can always be counted on to come back for some engaging geeky conversations. A resident of Philadelphia, he is currently working on building up his Man Cave with all things Marvel, Star Wars, and Video Games. As an old-school gamer, Matt firmly stands by his belief that gameplay will always be more appealing than story.
Related Articles: Lost Orbit
Share
Tweet
Share
Submit