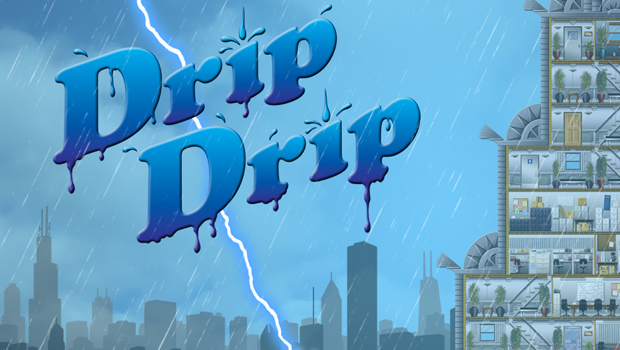 I’ve never been big on time management titles like Diner Dash where you run around stocking clothes or groceries on shelves. It always just feels too much like work to be fun. So I was reluctant when first going into Drip Drip, a game that tasks you with plugging leaks and collecting water with cartoon buckets and pans. But this latest PC/Mac title from Imminent Games actually far exceeded my expectations. In fact, I think I may be addicted to it.

[singlepic id=10953 w=320 h=240 float=right]One of the first things that hooked me was that it’s not exactly time management, even though it does share some similarities with the genre. This actually plays more like a tower defense game. Storms rage across the United States and it’s up to you, an elite drip collector (their words, not mine), to stem the flow of water as it trickles down throughout the building. You’re challenged with budgeting your money and choosing the best tools for each job in a timely and organized manner. Use your mouse to select and deploy units, ranging from pots to garbage cans, across the 2-D board and do your best to avoid obstacles such as UFOs and ghosts. If you survive the storm without the basement flooding, you complete the level.

Sounds easy enough, and it is… at the start. The first few levels serve as an introduction to the game’s mechanics. You’ll learn to repair pipes with hammers, clean debris with a broom and how to place buckets and pans under the drips so you can dump the water out the window. The difficulty increases as you advance through the 24 cities on the weather map. The degree of challenge is exactly where it should be. Players choose from settings ranging between easy, medium, and hard. I found the suggested medium setting to be just right; It remains within a manageable limit and I felt satisfied with a sense of accomplishment upon surviving a storm.

[singlepic id=10952 w=320 h=240 float=left]The graphics aren’t going to melt any faces but they are serviceable and easy on the eyes. The simple, cartoony atmosphere is part of the charm and it would only hurt to add 3-D water effects or intense detail. I would have liked a more zoomed out view or at least the option to zoom out. A lot of times I felt too close to the action and I wanted more of an overlord type view. There is a mini-map on the bottom left, but when it really starts pouring, it’s sometimes hard to see what’s going on or where the action is. Be prepared to use your scroll wheel a lot in this game.

I will say that the sound is probably my favorite part and one of the main reasons I’ve pumped so many hours into the game. In place of a looped song that could easily grow tiresome, you’re instead treated to the soft, lulling ambiance of a rainstorm speckled with distant thunderclaps. It becomes a bit of a meditative experience and I recommend wearing headphones. Actually, using your ears is highly important to succeeding in the game since the warning system relies heavily on different identifying sound effects. Every time one of your buckets is about to over flow or when a bolt of lightning is about to hit, you’re prompted by a unique, little whistle sound. When it really starts coming down you won’t have time to see everything at once and you’re forced to keep your ears open.[singlepic id=10955 w=320 h=240 float=right]

The biggest issue is with the controls. Everything is handled through the mouse. Just like in RTS you click one of the cartoon units, such as a bucket or sponge, and then you click the point where you want him to go. In most cases the bucket will obediently hop himself over and plug the leak, but sometimes this simple control scheme causes problems that can be frustrating while in the middle of a storm where every second counts. It’s difficult to select overlapping units and you need to constantly make sure you position each one just right in order to catch the drops. Sometimes I move on after placing a bucket only to later realize he’s standing just off center from the drops,  leaving a puddle. And maybe I’m spoiled, but I would have liked some hot keys. There’s nothing worse than dealing with five things at once when a pipe breaks out and you can’t find which floor your hammer is on. I realize this is part of the challenge and I may just be missing the point, but for a guy that grew up on Command and Conquer and StarCraft, it sometimes feels like fighting with an arm behind my back.

All in all, the game is most impressive and the controls do little in harming the overall appeal. The challenging game play is highly addictive and I felt a true sense of satisfaction once I’d managed everything in place and I was collecting every drop. There’s a high replay value with achievements and upgradeable units that offers many hours of meditative gaming. It’s great fun and well worth a purchase for any fan of tower defense or time management games. Of course, if I were really a fan of time management, I wouldn’t have spent so many hours playing a game about rain while it’s a beautiful and sunny day outside.[singlepic id=10954 w=320 h=240 float=left]

You can purchase Drip Drip for Mac or PC at the Imminent Games website for 9.99. There is also a demo available on the site if you would like to take it for a spin first. But in order to avoid a possibly uncomfortable situation, you might want to make sure you don’t drink too much and always use the bathroom before playing.