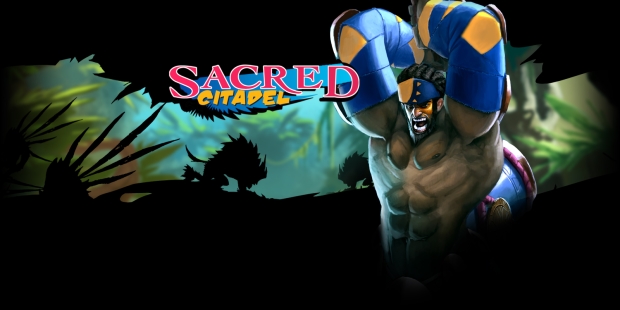 Arcade games came from a simpler time – you had a joystick, a few buttons and a coin slot. Your skill was used to determine how cheap your entertainment was. The games walked a fine line between killing players off and delivering gaming value with a sense of achievement. If you didn’t like the game, you voted with your quarters – and those games which failed to bring players back were carted off, never to be seen again. There was also a social aspect to arcade games – often you were there with friends, all working together (or against each other) to try and see who could last the longest or get the high score – ultimately it boiled down to who paid less for the same experience. Fast forward to today : on the various arcade-like platforms, we simply purchase a full license to play the game – in effect, we hand them all of our quarters first.

[singlepic id=12282 w=240 h=180 float=left]I’ll admit, a game like Sacred Citadel would have garnered some of my shiny arcade revenue. A graphically impressive side-scrolling beat-em-up with four classes to choose from, up to three players at a time with the ability to level up and gain new abilities would have been right up my alley. Boss fights, mounts , equipment upgrades  and wave after wave of monsters somehow tickles my fancy. In fact, this wasn’t a review copy provided to GamingTrend; I bought it with my own MS points. So why the golden axe to grind?

First, the sound – for starters, it cuts out. A lot.This is particularly annoying on my 7.1 surround system. The receiver disengages when it finds no audio signal, killing the sound. It re-engages shortly after, causing the sub to make a light popping sound. This isn’t a problem with my sound system; it happens only in Sacred Citadel, usually when there are three or more monsters making sounds simultaneously. I can assure you that during gameplay, this is not a rare occurrence.

Next up is the VO work –  voice acting is almost laughable. It’s almost like the voice actors aren’t even aware of the game and are asked to simply read the lines as if they were ordering a pizza. [singlepic id=12281 w=240 h=180 float=right]It reminds me of Castlevania : Symphony of the Night in that regard, and that is no compliment. The ambient sound wasn’t much better. The game starts you in a tavern where you get midnight-cricket sounds rather than a typical bar-like din – a horrible first impression, and one that lasts through the bland and uninteresting sounds throughout the four acts.

The combat system is on a pseudo-3D plane – that is, you can move left, right, up, down, as well as jump.  As you gain experience you will unlock new combos, which work fairly well. I found that the balancing for weapon cost per level worked well, and there were some nifty effects and properties given to different types of weapons. For example, using a mace would occasionally cause a stun effect, whereas an axe would bypass an enemy’s shield. In the end, a lot of the combat boiled down to pinning a bunch of enemies in the corner, and spamming them with a series of cheap combos.

[singlepic id=12284 w=240 h=180 float=left]Each character has their own special powers, be they brawn, magic or bow. Additionally, you could steal an enemy mount and use it against your opponents, though I found it to be a very mixed bag. The tank, for instance, was an almost unstoppable powerhouse of death and destruction, but the two-story behemoth was a pain to ride, and his attacks were so slow that you were perpetually getting knocked off. What’s more, a lot of these beasts simply got in the way of the combat, and I found myself hitting them to drive them off. I also found that some of the combos weren’t well executed as they use directions off the left stick and were far from a guaranteed hit.

But you can play multiplayer, right? Yes, yes you can. Playing on one console works well enough, and it pretty much stops there. I have never been able to successfully use the automatic matchmaking service – and I’ve been trying for *weeks*. I was able to get one person to join a match I created. Once.  This is a big problem – as it strips away the fun of grinding monsters and earning money and new weapons with friends and strangers. [singlepic id=12285 w=240 h=180 float=right]This problem is compounded with re-playability killjoys – no unlockable items or characters, and no hard mode to allow you to max out your higher level characters. There is a betting system available in-game where you can put down gold against accomplishing feats in any given level, such as not taking any damage, but the gambling engine was entirely broken and any hint of how to get it to work was absent from the help section.

I’d like to take a moment to point out that on release-day, they had DLC for the game – another 400MS points for Jungle Hunt AKA Act 5. No. Not going to happen, and here’s why – there isn’t enough game to make it an easy recommendation at 1200MS points – the idea of making it 1600 makes my teeth itch. It feels like a shameless cash-grab, and with a final product in this state, it was more than likely rushed out the door. Sadly Sacred Citadel will never garner the attention it could have had they delivered it bug-free and with much better audio presentation. Dig deep enough, and you may find a game worth owning here, but it’s not for everyone – if you’re still interested I suggest you try the demo first. The folks who worked on it were certainly heading in the right direction – Sacred Citadel just doesn’t have enough polish or pull to really keep you coming back for more – an experience I’d rather had not given my bag of quarters up for.