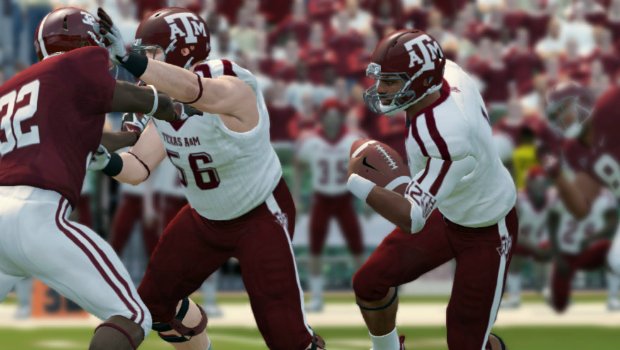 There is an old Shakespeare quip that reads, “All that glisters is not Gold.”  It is a poignant, timeless term that wonderfully applies to EA Sports’ NCAA Football 14, which shines like a new set of fancy dancing shoes, but ends up wearing like the same old pair of sneakers you’ve kept wearing all these years.  While NCAA Football 14 appears to have grown into a new skin, it only takes a few moments to see that it is mostly still the same old game with the same old problems.  That said, the improvements that have been made are striking.

[singlepic id=14038 w=320 h=240 float=left]The most shiny new component of NCAA 14 is the Infinity Engine, and it delivers.  The engine, which made it’s debut in Madden last year, considers weight, mass, height, momentum, and more during cuts or collisions.  It applies to all players on the field, allowing for realistic blocking schemes and down field pursuit.  In the time that I played, the promise that EA gave that no two collisions would be the same or predetermined rang true.  Speedy ball carriers can better utilize their agility and speed to burst through holes, while power backs are able to use the full momentum of their run to punish defenders.  This especially changes the culture of the game, as bruising, slow backs have been painfully ineffective throughout the lifetime of EA’s football titles.  On defense, players react to movement better than ever, show patience in their decision making, and tackle high or low depending on the situation.  This implementation is more important for the future of NCAA Football titles rather than just in the present, as the hope is EA will be able to build on their success here to bring football simulation into total realism.

[singlepic id=14039 w=320 h=240 float=right]The various game modes are greatly unchanged.  Players can pick up a quick game either locally or online.  Dynasty mode is intact, allowing players to pick or create a coach and work their way through numerous seasons of growing success.  Your coach will set the rosters, ride the recruiting circuit, and make the calls that can make or break a school’s chance for greatness.  If you simply want to see how the current season will play out, without clunky recruiting and coaching functions, simply play 2013 Season mode to see how your team will fare.  For players more interested in a single position, the Road to Glory allows you to create a quarterback, or a linebacker, or any other dedicated position as you play hard to become the best.  Creatively stunted?  Simply choose a past Heisman winner in the Heisman Challenge and try to relive their own personal Road to Glory.

[singlepic id=14040 w=320 h=240 float=left]The biggest changes to the game modes comes within the Dynasty Mode.  Coaches are now given skill trees, akin to those in the popular RPG title “The Elder Scrolls V: Skyrim.”  After each game or accomplishment coaches will earn experience points which can be applied to various perks, making that coach stronger and more able to serve his college well.  Over time, your coach will grow from a upstart to a legend, with upgraded recruiting and game management skills which, in turn, will pay the bills.  Offensive and defensive coordinators also gain perks as they level up.  Also updated is the recruiting function, an update which has been long overdue.  Instead of spending minutes with players, working through phone calls and individual aspects of your school, now coaches can choose to allot a certain number of points to each prospect.  The rest is taken care of for you, so you simply set the number of points, offer a scholarship, and let the process take effect.  The point allotment carries over from week to week, allowing players to simply let it ride, or make minor adjustments based on need without having to reset the entire allotments.  The recruiting part of the game has always been a double edged sword, one that is very key and required but also very boring and easy to just skip over for most players.  Any work that EA does to make it simpler and faster to get through is a move in the right direction.

[singlepic id=14041 w=320 h=240 float=right]Outside of the myriad of changes the Infinity Engine have implemented into gameplay, the game mostly plays just like any other NCAA title.  Ball carriers have a trucking stick, which can inflict monster hits to defenders and keep power backs upright.  A new stumble recovery mechanic allows players to pull down on the right stick to try and catch your balance, or push forward to lunge for extra yardage.  Defenders still have the hit stick, a powerful tackle that can jar players and knock the ball loose.  Most of the gameplay changes have applied to CPU controlled players, making both your teammates more effective and intelligent and the opponents more savvy and hard to defeat.

However, there are a few new functions in gameplay that focus on the ball carrier.  Having considered the new found popularity of the option scheme in college football, EA has completely revamped the option game, giving players a quick view of what button commands to use resembling the passing mechanic.  This is fantastic, as the option was just a quick way to lose 13 yards or give up a fumble in past games.  Due to this, the option game has been deepened and now dominates the play calling for many teams.  Hurry-up offenses are now given the opportunity to change the play at the line of scrimmage without clunky audibles or hot routes, and the defense in that situation is no longer locked into the same play over and over, hopeless to change the outcome without wasting a time-out.

[singlepic id=14042 w=320 h=240 float=left]The presentation of the game is a big hit-and-miss.  The new graphics and menus look great, but as in the past are laggy and hard to navigate.  The player models on the field look just fine, though sometimes they will freeze in place or slide across the field like an old electronic football game.  However, the in-menu face models have again gone unchanged.  Long-time players of the series will recognize the same six or seven faces that EA has chose to apply to every single college football player in the game.  While it may be a problem of legality to avoid likeness issues with real college players, it appears as laziness and is laughably lame.  On-field ambiance is at an all-time high level, with realistic and play specific player banter, dynamic crowd noise, and over 500 cutscenes between plays.  However, it still seems like there are only a handful of “vignettes” that show up.  Worst still, if you are dominating in a game at home, the crowd will incessantly chant “Seven Nation Army” as if every college stadium around the country was filled with drunk Miami Heat fans, confusedly celebrating their own victory to the chagrin of the others.  Lastly, the menu music is a single song, about a minute and half long, that plays on a loop.  After just a half-hour of this, I opted for stark silence rather than that torturous sound.

NCAA Football 14 is a fun and immersive experience as always.  Though not many big changes have come in this latest edition, the ones that have come definite steps forward.  Many of the drawbacks that come with this game are the same ones that many sports titles suffer from.  Though it “glitters” like a all-time great game, it unfortunately falls short of perfection.  However, with the inclusion of the infinity engine and the numerous attempts to make the gameplay deeper and more user friendly, EA has made a game that is worth buying and can offer many, many hours of enjoyable gridiron action.