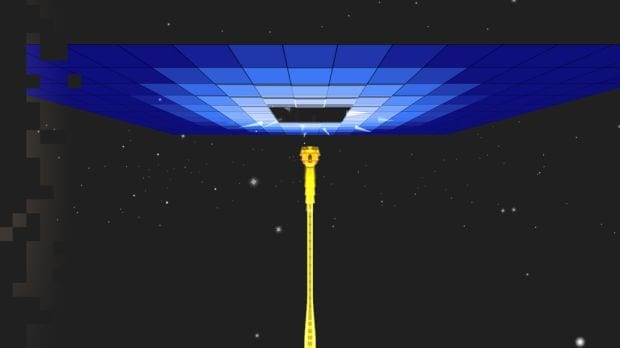 Imagine an America where arcades flourished into the modern era. Where one could go to the mall to waste countless hours on the latest and greatest machines. In this world, nestled between the Pac-Man Championship and Everyday Shooter cabinets, would be qrth-phyl. Matt James, founder (and only) member of hermitgames, has done what so many try to do with their indie titles: make a modern game that evokes the feeling of a classic.

The game loads into a low rez, 2D screen. You have four menu choices: sequence, invert y, notes, and exit. Selecting sequence starts the game. Keeping with its old-school vibe, there are no saves. Every time you play is a challenge to complete more sequences (levels) than the previous time. This is where modern programming comes in. The game randomizes its levels, so where as in Pac-Man you can memorize the maze progression, here you can only hone your reflexes.

[singlepic id=10419 w=320 h=240 float=left] This game plays like Pac-Man and his deranged love child with every version of Snake. The goal is to collect (eat maybe?) cubes scattered around the play area while avoiding obstacles and your own Tron inspired tail . As you collect them, a grid on the bottom right of your screen fills and your tail gets longer. Did I mention that the play area is the surface of a 3D object?

Once the snake has feasted upon the required amount of cubes the game will pause. All of the graphics go to a green vector style framework, and a hole opens up in the level. After it unpauses you may continue to collect the remaining cubes, but passing over the hole will take you to the next sequence.

The big twist for this game is that the new level is literally inside the object you were just playing on. As you travel through the hole, the game shifts from its top down orientation to a full 3d environment. The goal is the same, but now you have to keep from running into your tail or the walls while flying around the interior of this object.  Once you have collected the required number of cubes again, the game will pause and do its vector graphics thing. This time when you exit, you find yourself on the surface of a new 3D object. Rinse and obsessively repeat until you run out of lives.

[singlepic id=10420 w=320 h=240 float=right]A few small control issues mar what otherwise would be a perfect arcade experience. On the surface you don’t simply control the snake with the thumb stick. You only rotate his direction, which is orientated to the way that he is facing. That sounds all fine and dandy, but can get really confusing when shifting from one plane of an object to another. Its not a showstopper, but takes some getting used to. In the interior space, the over-the-shoulder camera can blind you with your own tail. It does not happen enough to break the game, but when it does its damn frustrating. To be fair, many AAA titles have similar issues, and this was made by one guy. That doesn’t make it any less annoying, just easier to understand.

For a game that randomly generates new levels and claims to adjust the challenge to the person playing it, qrth-phly’s difficulty progression is surprisingly smooth.  As you play, the game starts adding more obstacles, cubes that shoot out lasers, tighter internal spaces, and moving objects to avoid, all at a pace that is entertaining without becoming crushing. There are also some pretty sweet easter eggs in there. Finding them is easy if you pay close attention.

The lo-fi, chiptune soundtrack creates a perfect, almost haunting atmosphere. The choice of color and shading for the graphics really enforce the old-school feel. For being a fairly simplistic game the mood is strikingly eerie. The playfield will shift colors or random text will appear while playing. Everything about this game’s look seems purposefully unfinished, as if the graphical errors add to the experience, which I am sure is completely intentional. So if you miss those great gaming halls of yesteryear but want something with a strangely intense vibe, qrth-phly is definitely for you. And when it’s only 80 MS points ($1), why not?

(P.S. I don’t know how to pronounce it either…)