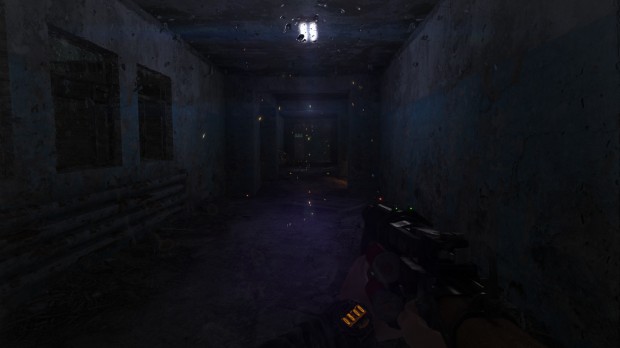 There really can’t be any doubt that Metro: Last Light is one of the best shooters this year. Smoothing out its predecessors rough edges, Last Light succeeded by combining its improved shooting, intuitive stealth mechanics, and incredible world in fascinating ways. It didn’t hurt that the presentation was amazing; 4A games used a beautiful graphics engine to craft the most authentic world this side of Half Life 2.  The Faction Pack DLC still looks and sounds great, but it runs into trouble when it tries to dissociate the separate elements that make Metro special.

[singlepic id=14503 w=320 h=240 float=left]Each of the three missions deals with a different faction in the world of Metro, but the (Red) star of the show is the Kshatriya campaign. Set near Polis station, the mission lets you scavenge the Lenin Library for artifacts of the world before the bombs fell. What sets Kshatriya apart is the obvious roguelike influences.  You can only save when you return to your home base; there are no checkpoints in the Library. You’ll find yourself constantly weighing your options: do you continue exploring or do you play it safe and head back?  Balancing your need to purchase supplies–especially filters for your gas mask–and your fear of losing all your progress creates an incredible sense of tension. It doesn’t hurt that the Library is an incredibly creepy location. 4A uses ghastly lighting and disquieting audio to make the ruined building feel appropriately sinister. Some familiar mutants return for their first appearance in Last Light,  including the hulking Librarians.  The whole thing is pretty great, and I’d love to have an entire game like this–Dark Souls as a shooter, if you will.  (EDIT: I can’t believe I forgot about this.)

The “Sniper Team” campaign puts the player in the shoes of a Red spy infiltrating a Nazi camp. This mission focuses almost exclusively on stealth–if enemies discover you they’ll start ringing alarm bells, and that’s game over. Metro’s sneaking remains satisfying–it’s still really interesting to get the glimpses of the larger world when you eavesdrop guards’ conversations. The Nazis even make oblique references to Artyom’s story, which helps place Sniper Team into the context of the main campaign.  About the only fault that can be leveled at Sniper Team is its incredibly short length–you won’t even catch your stride before the whole thing is over.

If only I could say the same about the last mission. Normally, I’d be mad about a 15 minute run time but with “Heavy Squad” it’s a blessing in disguise. Focusing on a Nazi heavy weapons team, it’s little more than a glorified turret sequence.  You stand in a small room and shoot wave after wave of onrushing communists with your six-barreled minigun. That’s it. That’s all the Heavy Squad mission has to offer. Metro’s shooting has never been what made the series worthwhile, and you’ll find nothing here but frustration.[singlepic id=14501 w=320 h=240 float=right]

Of the three new missions or campaigns, only Kshatriya offers something you couldn’t get by merely replaying Artyom’s campaign, and it’s really the only thing worth buying.  If you like rougelikes and can deal with a bit of frustration, go ahead and get the faction pack.  If that isn’t your gig the rest of the Faction Pack is going to leave you frustrated and disappointed.  The Metro franchise succeeds because it synthesizes its imperfect components into a glorious whole; the Faction Pack fails because it breaks Last Light  into its inglorious elements.