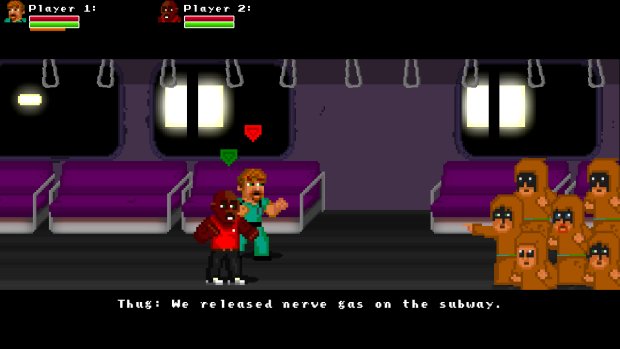 Recently, Adult Swim, the widely loved late-night “mature” cartoon network hybrid, has tried to dip their hand into the video game publishing business. But they’re definitely not publishing in-house developed projects exclusively. They encourage folks to send in their unique pitches to Adult Swim headquarters in Atlanta, as long as they meet the technical requirements and guidelines. Adult Swim has published some pretty solid games using this system, such as Super House of the Dead Ninjas. Their recent pet project, Fist Puncher, has now landed in our hands and is itching for our devourment. Can Adult Swim continue their string of decent publishing jobs?

One of the things that hits you square in the face once you boot up Fist Puncher is the clear homage to old school video games. Fist Puncher is a left-to-right side scrolling brawler, a genre of game that many thought dead. You can’t help but appreciate developer Team2Bit’s foray into outdated video game tropes, including the 8-bit graphics. The issue is that there’s a reason the 2D brawler genre was previously thought to be dead: those sorts of games, simply put, become one big bore when you’re not pumping money into an arcade cabinet.

[singlepic id=14029 w=320 h=240 float=left]The one way to avoid that problem is to add an intriguing twist on the outdated combo-based combat mechanics. The wide array of combos definitely help keep the action somewhat interesting. As the game goes on, you can even unlock newer, more extravagant moves. These unlockables not only look cool but are also much more powerful. But after a while, that new combo smell definitely begins to wear off. To help avoid the inevitable boredom of the combat, Team2Bit introduced a fairly expansive level-up and perks system.

The system spans across the game’s many characters with each having a few exclusive perks. These perks can range from unlocking the ability to heal other players to increasing player health. All these special inclusions definitely help extend the life of the combat past most other brawlers, but it still becomes tiring after a while. The simple fact is that this brawler-form of hand-to-hand fighting doesn’t hold up in this day and age, no matter how much hard work you put into it.

One thing that does hold up is the 8-bit art style Fist Puncher so expertly holds high. This retro approach to art is one I’m a major sucker for and Fist Puncher executed upon it to near perfection. Each character holds their own unique style, which is only highlighted further in how they animate during combat. Possibly the only issue comes from the occasional repeated environments that you experience. It doesn’t happen too often but when it does, it’s a bummer, mainly because I’m consistently craving more of the delightful art. The image of their 8-bit fire could be my wallpaper for the rest of my life and I’d be one happy soul.

Also included is the wide range of different characters Fist Puncher possesses. While most brawlers are limited to four characters, Fist Puncher has up to fifteen unlockable [singlepic id=14030 w=320 h=240 float=right]characters, four of which are unlocked once you begin the game. These unlockable characters are not hard to stumble upon, so you’ll find yourself with ten characters to choose from in no time. Each character has their own special backstory, told by a small cutscene of what seems like FBI agents sitting in a room giving backstory for each of our characters. The problem with having this many characters is that after a while, you begin to have a “main character” that has the highest level whom you use constantly. As the difficulty increases in each level you play, it’s impossible to bring in a fresh character late-game and expect him to be affective enough to clear out every enemy. You can always go back to previous levels and grind out EXP, but just ask JRPGs: it isn’t a whole lot of fun here either.

Even when you don’t use a new character, you’re still required to grind for EXP at some point due to the difficulty spikes.  In typical old school fashion, Fist Puncher is one hard game. Fighting the normal pawn enemies never proves much of a challenge, but once you meet up with one of the many bosses in the game, control squeezing anger is practically inevitable. Even once you level up dramatically, late game bosses can take you out in less than five hits. The only real solution here is to continuously restart that boss fight until you level up enough to finally conquer him.

[singlepic id=14031 w=320 h=240 float=left]That is, unless you have multiple people playing with you. The issue is that Fist Puncher doesn’t support online co-op, only local. So to get the full experience, you must gather up four friends and cram them around your computer monitor. Sure, you could use the Steam Big Picture mode to display the game onto your TV but not everyone can easily achieve that feat. Even if you can, finding three other people who want to play Fist Puncher is usually harder to do than beating one of the many bosses by yourself.

While it has more than a few drawbacks, there are some things to really like about Fist Puncher. The art style is gorgeous and Team2Bit’s homage and expansion upon old-school brawlers is one that definitely earns respect. But in the end, the 2D brawler genre has begun to become extinct for a reason and Fist Puncher isn’t going to rectify that. Sadly, the brawler genre isn’t the only thing wrong with Fist Puncher. With some occasionally impenetrable difficulty and lack of online co-op, it feels like quite the disappointment by the time you put the controller down. If the rest of the game had been better designed, could it have risen above its brawler genre constraints? That’s a question to which we’ll never know the answer.