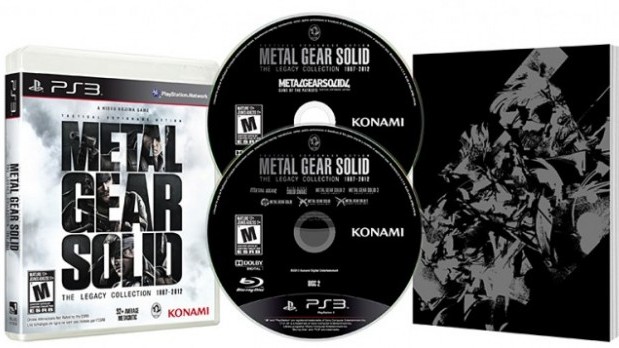 Cardboard boxes. Psycho Mantis. The La Li Lu Le Lo. Over the course of nearly 25 years, the team at Kojima Productions have enthralled fans the world over with incredibly convoluted plots, unique stealth-action gameplay, and the most bizarre fourth-wall breaking moments in video game history.

Despite complaints that series director Hideo Kojima tend to be a bit over-indulgent — relying heavily on overly long cutscenes and forcing the player to go for long stretches without even touching the controller — his use of themes like genetics, nuclear armament, the question of identity, and more have caused the Metal Gear franchise to be one of the most beloved series ever created. In celebration of a quarter century of Solid Snake, Konami has seen fit to release Metal Gear Solid: The Legacy Collection, a package compiling virtually every important Metal Gear release, so old fans and newcomers alike can discover the glories of Tactical Espionage Action all in one place.

[singlepic id=14570 w=320 h=240 float=left]For those who haven’t donned their Sneaking Suits and Codecs yet, the Metal Gear Solid series follows the adventures of one Solid Snake — a government (or later, ex-government) operative who is summoned when all other options have been exhausted. His goal: to infiltrate whatever secret base is required with minimal enemy contact. Along the way he’ll meet a wealth of characters: allies, supernatural enemies, and giant bipedal nuclear-capable mechs alike.

The catch is this: the amount of time playing each of the games in the series will roughly equal the amount of time spent watching them. Each of the myriad characters you’ll meet all love to spend tens of minutes waxing philosophically on the nature of war or revealing their secret, diabolical plans. Yes, Kojima absolutely needs an editor, but it’s also part of the charm of this series. Metal Gear games are about the philosophy and culture surrounding their stories as much as it is about the compelling stealth gameplay or even the very nature of how we interact with our games, and it’s this dichotomy that makes the series so unique.

For those yet to take the plunge (or have sold their copies in the past) this is a perfect opportunity to grab every major entry in the franchise in one go and get a few extras along the way. You get two discs in Metal Gear Solid: The Legacy Collection: one that compiles 1980s games Metal Gear 1 and 2 (originally found on the Japanese MSX Computer), along with Metal Gear Solid 2, 3, and Peace Walker and digital graphic novels of Metal Gear Solid 1 and 2 (virtually hidden on the disc under the Videos section of the PS3’s XMB), and the other disc that contains Metal Gear Solid 4. Rounding out the package is a download voucher for PlayStation releases Metal Gear Solid and Metal Gear Solid: VR Missions.

[singlepic id=14573 w=320 h=240 float=left]Each game is just as unique and bonkers as you remember them. Psycho Mantis will still mess with Snake’s head in Metal Gear Solid. Raiden still runs around naked for a good portion of Metal Gear Solid 2 — probably the first postmodern video game ever created. Naked Snake still has to eat alligator meat to survive in 1960s spy thriller Metal Gear Solid 3. The controls, voice acting, graphics (despite an HD treatment for a few of them) are all the same as they were when they were released. All told, there are eight games on offer here, each entry showing the evolution of one of the most successful video game franchises of all time. Not a bad deal for fifty bucks.

Also included is a neat little art booklet, showcasing concept art, promotional posters, box art, and other goodies from North American, Japanese, and European regions. It’s not a necessary document — there are other, far better art books out there covering the history of Metal Gear Solid — but as an included bonus, it’s welcome.

[singlepic id=14572 w=320 h=240 float=right]As a compilation of the most necessary games in the Metal Gear Solid series, the Legacy Collection is an absolute no-brainer. In fact, my only real complaints are that Metal Gear Solid and VR Missions don’t come on a disc — you have to download them from the PlayStaion Network via downloadable voucher code. Yes, they’re included, but if you want physical editions of each of these games, you’ll be disappointed to discover that two of them are download only.

Plus, while each of these games represent most of the core franchise, this could have been an opportunity to let fans experience some of the more random, even crazier bits from the series. What about The Document of Metal Gear Solid 2, a PS2 release that featured a behind-the-scenes documentary of MGS 2, interactive 3D character models, full dialog script, and other Metal Gear related paraphernalia? What about Metal Gear Ac!d, the turn-based card-collecting strategy game for the PSP? What about the amazing, totally-not-canon Metal Gear Solid for the Game Boy Color? Or the other totally-not-canon Metal Gear 2: Snake’s Revenge for NES? I’d love to dive back into some of these more obscure gems, even if they weren’t uprezzed for HDTVs. It would have been great to include every Metal Gear game available in this collection — at the very least, through video — so fans could get a sense of just how huge this series really is.

[singlepic id=14574 w=320 h=240 float=left]These complaints are incredibly minor compared to the impressive value offered in the Metal Gear Solid: The Legacy Collection. Eight of some of the most deep, thought provoking, critically acclaimed action games are available in one package and at an absolute steal. There’s a reason why Metal Gear Solid is so beloved — if you’ve never had the chance to find out, now’s the perfect time to take the plunge.