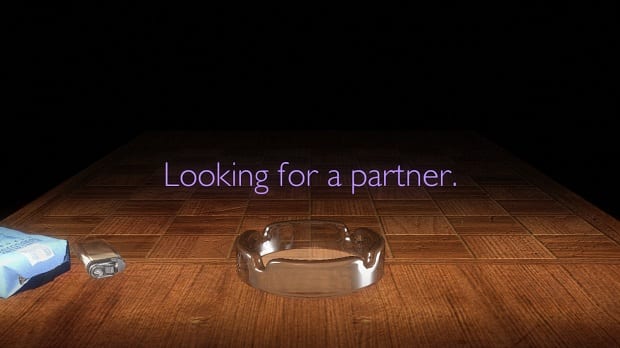 I was really excited when I started looking into my copy of Bientôt l’été (pronounced sort of like “beeyon-two ley-tey”) It’s a game created by Tale of Tales, the same team that gave us “The Path,” a solid take on the Little Red Riding Hood mythos that mixed myth and horror in interesting ways. It’s a game that fits right into one of my new favorite genres, which I’m going to call “experience game”–games that you don’t play to win, but rather play to create mood and emotions. Think of games like Dear Esther or Slave of God, and you have the right idea. Does Bientôt l’été measure up to those other titles? No, but it’s laudably ambitious in it’s failure.

Bientôt l’été is one of those games that fails to deliver on a singularly great premise You’re in a bad relationship, and you want to have “The Talk” with your partner, but you’re having trouble finding the words, so you walk along the beach to gather your thoughts. It’s ambitious, and despite all the game’s dialogue being in French, it’s relateable. The game wants to make you feel profound emotions, and the music and atmosphere do come together to reach a nice sense of melancholy, but that’s really all the game has to offer.

[singlepic id=10745 w=320 h=240 float=left]Gameplay is split between two distinct phases. After chosing either a male or female avatar, you find yourself on a beach, staring out into the ocean. If you turn around you’ll find yourself looking at a single house, with no other indicators that the beach has ever felt human footprints. As you walk along the beach, words and phrases fade into view before vanishing—phrases you’ll remember later.

This part of the game isn’t technically gorgeous, but the soft focus and ample bloom create a dreamscape that mixes well with the melancholic piano soundtrack that plays under the crash of waves and the cries of gulls. But what’s strange is how the game seems to strive to highlight the artifice of it all. Holding the right mouse button will close your avatar’s eyes, and replaces the dreamlike atmosphere with a very different holographic / cyber-futuristic look–if you imagine a beach in the Tron universe, you’ll have the right idea. Walking too far down the beach causes the world of the game to start…degrading. The soft blue sky turns to a whirling starscape, with huge planets rushing from horizon to horizon in seconds. The smooth gameplay starts hitching, as [singlepic id=10747 w=320 h=240 float=right]though the game was dropping frames, and harsh electronic beats swell up over the delicate piano score. The farther you venture from the beach house, the more the artifice shows, until at last you reach a glowing purple wall, in which you see yourself reflected as the opposite gender. These are interesting ideas, and the more I think about them the more depth I find. Perhaps the beach house is a dreamy paradise, and the further you venture from your sanctuary, the harsher the world seems? Maybe the gender-swapped reflection in the wall meant to indicate how difficult it is to escape the perspective of your gender, class, race, religion, sexuality, etc., etc. These questions would be a lot more relateable if the beach section of the game was more enjoyable,

Unfortunately, this half of the game is crippled by a terrible control scheme. Instead of using the tried and true WASD controls, Tale of Tales decided it would be better to create their own control scheme, and it’s a mess. You can only turn by hovering the mouse near the edge of the game screen. Pressing and holding the left mouse button will make your avatar walk forwards, but at such a glacial pace that it’s cripplingly dull.

As you walk along the beach, you’ll find a few (and I mean a very few) intractable objects, and among the rare dead birds or stunted tree you’ll find a chess piece, which you’ll use in the second half of the game. Enter the house and you’ll find yourself seated at a chess table, equipped with your collected chess pieces, a bottle of red wine, a pack of cigarettes, and a tape deck.

This second half of the game is where everything really comes unhinged. The idea is to connect with another player and have a conversation of sorts. The problem is that it’s impossible to connect with any other players. You enter the house, sit down at your chess set, and wait as the words “Waiting for a partner.” drift across your screen. It’s so bad that in all the time I’ve spent playing the game, I’ve only managed to come across another player once, and that a brief encounter of five minutes. This problem is made more unfortunate because you can’t simply specify a player to join—like thatgamecompany’s Journey you’re randomly connected to somebody else. The key difference is that in Journey the system actualy, you know, works.

[singlepic id=10746 w=320 h=240 float=left]Fortunately, the game does offer a computer “simulation” of a partner. Unlike the real thing, however, the simulation is a ghostly, translucent projection. Perhaps it’s merely you holding the argument against a figment of your imagination; trying to imagine how the “real” conversation will go. Another neat concept, but wasted on a broken game.

If you find a partner to talk with, or opt to play “against” the computer, gameplay is pretty simple. You and your partner take turns placing chess pieces on highlighted squares on a chessboard. Each new placement is equivalent to speaking a line of dialogue you’ve collected. If you want to pass a turn, you can drink wine, light a cigarette, change the background music, or simply remain silent by placing the piece on a non-highlighted slot. A sample conversation follows

Comp: I have started to suffer from the lack of you.

Comp: I have seen you often in my dreams

Comp: Do you understand?

Me: I wish you were dead.

Comp: I love you.

Me: I think I remember.

Me: Maybe I will not manage?

Me: A glass of wine?

Comp: Before you I knew nothing of suffering.

Comp: I knew nothing.

Me: I remember too.

Comp: I wish to stay with you

If that seems disjointed, well, that’s because it is. But I’m willing to give Bientôt l’été a pass on the strange dialogue because it’s a deliberate choice—an attempt to link the game to the French New Wave cinema movement. And you know what? Like La Nouvelle Vague, Bientôt l’été’s dialogue has some really evocative lines among the strange phrasings. I adore the line “Before you I knew nothing of suffering.” It’s indicative of the deep pain one human can suffer because of another, but it’s simultaneously desperate for those feelings to continue. You might call it pretentious—and it assuredly is—but I have to give some respect to a team trying to make a game under French New Wave aesthetics.[singlepic id=10744 w=320 h=240 float=right]

It’s a shame that Bientôt l’été is a game that is almost certain to be forgotten as the broken mess that it is. I really thought this game had some great concepts, but the unworkable controls and awful matchmaking destroy any chance it had. If you can find it on sale cheap—we’re talking under 5 bucks—and you really like the French New Wave, you might be interested. Otherwise, I’d definitely pass.

One last thing: you want to know how bad the matchmaking really is? I sat down at the chess table in Bientôt l’été before I opened my word processor, and now—1200 words later—I still haven’t found my special someone.