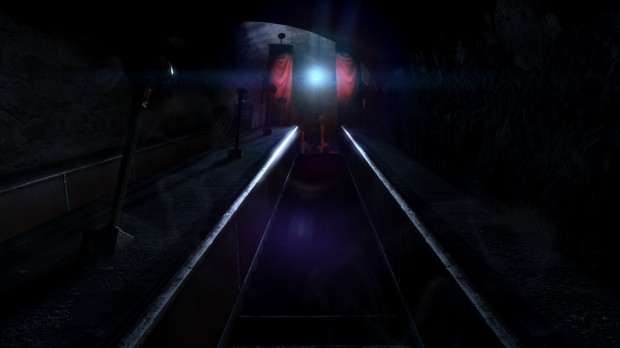 I can tell you the exact moment my opinion of Metro: Last Light crystallized. As I was making my way through subway system beneath a bombed out Moscow, I found I had to sneak through a Communist-occupied station. As I avoided detection by stalking through shadows and–I’m not ashamed to admit it–knifing a few Reds, I came to a brightly lit hallway. Maybe it was the lateness of the hour, or maybe I was tired–who knows?– but for some reason I thought it would be a good idea to go through the light instead of searching for an alternate route. As I walked down the hallway I hear a Russian voice behind me quizzically ask “Who the fuck are you?” Instinctively, I whipped around and sent a knife flying into the Commie’s throat. I waited for the inevitable avalanche of heavily armed and armored Red soldiers to fall on me…except it never came. It struck me then that the guard hadn’t had time to alert anybody…and that was it.  That was the moment when I realized how much Kiev-based 4A Games had improved upon its debut effort, Metro 2033.

[singlepic id=12383 w=320 h=240 float=left]Anybody who played Metro 2033 will understand why the scenario above surprised me as much as it did. One of the biggest flaws in 2033 was the way enemy AI seemed to share a hive mind; if any part of the collective heard so much as a breath of wind, the whole platoon would know exactly where you were. It made 2033’s occasional sneaking missions a frustrating mess. This whole scenario illustrates the biggest differences between the two games and perfectly encapsulates what 4A Games have done: taken the rusty old Metro and evened out the burrs, honing it to a razors edge.

There’s a lot to discuss with Last Light, but the first thing we need to talk about is the environment. In Metro 2033, 4A Games created—in this critic’s humble opinion—the most authentic gameworld since Half Life 2. The broken down, shattered Metro felt real. It felt like an actual place, occupied by actual people with problems, worries, fears–maybe even dreams. Metro: Last Light doesn’t quite reach the same level of verisimilitude as its predecessor, but it’s an admirable display of authenticity in its own right. As you journey through the broken subways you’ll come across a slew of incredible moments that feel like you’re peeping right into the lives of people who’ve been put through the ringer. You’ll have to forgive me if this is a lot of praise without any specific examples, but I think these moments deserve to be experienced in their proper context.

The story isn’t William Gibson-level materiel, but it’s certainly better than you’d expect if you’d assumed Last Light was another run and gun shooter. Spanning about 10 hours, the plot revolves around the fall and redemption of Artyom, our young Russian hero, as he attempts to capture the last of a psionically gifted race of sentient mutants. Along the way you’ll meet a host of characters, but the standouts are the likable Communist soldier Pavel and the enigmatic, mystical Khan. Be warned that this game is extremely linear—like the titular Metro, the player will spend the vast majority of the game on the rails.  There are some chances where the player can jump the tracks, and I highly recommend you take these detours when they present themselves–they’re some of the best parts of the game.  It’s a bit of a shame that the game has been streamlined so much, though.  One of best parts of 2033 was wandering the subway tunnels with Khan. For almost 30 minutes straight, there’s essentially zero combat; you just follow Khan as he explains ghosts, anomalies, life and death. It’s one of my favorite parts of the whole game, but sadly there’s nothing quite so self-indulgent to be found in Last Light.[singlepic id=12386 w=320 h=240 float=right]

While Metro 2033 crafted an incredible world for the players to visit, the actual gameplay left much to be desired. Guns felt incredibly underpowered—later enemies could take two or three headshots to bring down—and I’ve already explained what a mess the stealth sections were. In Last Light, nearly all of those rough spots have been smoothed over. Sneaking around feels just right—difficult, but not frustrating. This time around 4A added a big  blue light below the crosshair and a loud audio sting to give the player better warning when they’re visible to enemies. The whole system works really well, and it’s a good thing, too—you’ll have to sneak your way around quite a bit more often than you did in 2033. Guns feel like they have a bit of weight to them, and seem appropriately powerful. New to Last Light is the ability to customize weapons with the addition of silencers, stocks, and optics.

One big loss in Last Light was the incredible Ranger Mode, an added difficulty modifier that made Metro 2033 a white-knuckled experience by severely restricting your access to ammunition and all but forcing you to master the finicky stealth mechanics. I played Last Light on Normal difficulty to get through it quickly, but in retrospect that was probably a mistake.  Last Light is much easier than its sire. I never felt any sort of desperation or had to worry I’d run out of ammunition or gas mask filters. I don’t know if that’s all bad, though—you could reach some unwinnable situations in Metro 2033 if you made a simple mistakes early in the game. I went ahead and paid the $5 for Ranger Mode, and it seems to fix the issues I had with difficulty. It’s still a real shame that it’s not included, though. Ranger Mode is probably the way Metro is supposed to be played.

[singlepic id=12384 w=320 h=240 float=left]I’ve been dancing around the issue a bit so far, but I think it’s time we finally talked about graphics. If you have the computer that can run it, Last Light is going to look incredible. Shadows play a huge role in gameplay, and I was pretty consistently wowed by the contrast between light and dark. Characters have emotive faces that aren’t as creepy as you might think they would be. Everything in the game seems covered with a wonderful layer of grime, and watching blood splatter on the eyepieces of my gasmask never once got tiring. But there’s a real price to pay here. This is my rig compared with the minimum specs posted by 4A:

As you can see, my PC isn’t exactly a barnstormer, but it is a fairly solid piece of machinery.  Its been a real workhorse for me, and it’s well above the min specs. And yet, though I was playing on the lowest possible settings and armed with freshly updated drivers, Metro: Last Light brought my PC to its knees. Smoke never looked right. Out in the tunnels of the Metro things went smoothly, but nearly every time I visited a populated station my framerate plummeted. I’m not sure if it’s an issue with my setup specifically or a problem with the game as it’s programmed, but it was a bit of a shame, since wandering around stations and listening to bits of gossip was one of my favorite things to do in both entries in the Metro series.[singlepic id=12387 w=320 h=240 float=right]

Audio suffered similar issues. The Metro series always had some great ambient audio—whispers in the dark, water dripping off pipes, the snarling of monsters in the tunnels.  All of the same  is present in Metro: Last Light, but I had some major issues with scratching and popping. It got so bad that I had to stop using my excellent headphones because they seemed to make the popping worse, or at least more noticeable. Again, this might be a problem with my rig, so we’ll have to see how this pans out. Voice acting is good across the board. The tone is perfect—it balances English with just enough Russian thrown in to fit the mis-en-scene. You’ll quickly grow to love your Red comrade Pavel and his reassuring stream of Russian curses. Overheard snippets of enemy conversation are a real treat if you’ve got the patience to listen to them. Even the voices of the Metro’s children—a real low spot for 2033—are tolerable.