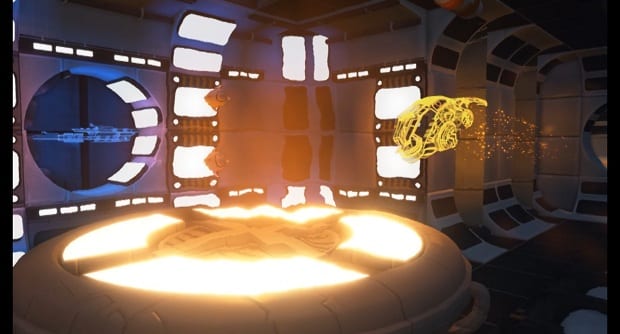 The people working at Cadenza Interactive really seem like fans of the hit entertainment titles of the 1990s.  The first was the exceptional “6 degrees of freedom” shooter Descent, still widely considered one of the best games of the early nineties. The second was the Canadian television show Reboot, which envisioned the inner mechanics of a PC as bustling city. Cadenza’s latest game, Retrovirus, is a mixture of the two properties, giving the player control of an spaceship-like antivirus program chasing a massive worm as it tears its way through a computer.

Cadenza hyped Retrovirus by leaning on the quality of its writing, so much so that the game actually features three distinct story threads.  The first storyline, which details your allies’ fight against the viral invaders, is actually the least interesting—especially when it’s saddled with a pair of disastrously boring bosses at the end. The second story revolves around a woman’s fight to keep her artistic ideals in a world built on compromise, and the last story centers on the deteriorating relationship between two disaffected hackers. It’s these latter two stories, which you’ll uncover through recovered emails, that will keep you playing. The writing is a bit of a mixed bag, though. You’ll find great lines (“So let it be written, so let it be run”) sitting incongruously next to fairly obvious grammar errors (“let’s not lose sight on the prize”).

[singlepic id=10462 w=320 h=240 float=left]The first and most obvious thing one notices when booting Retrovirus is the setting—nothing I’ve played before really looks quite like it. Over the course of the game, you’ll chase a malicious worm through the PC’s email client, web browser, even into the deepest reaches of the OS. All of these areas are visually distinctive—the AV Storage area looks like a high-tech research lab, while the OS is clearly modeled after a cathedral—yet each stays true to the games overall aesthetic. It’s actually really engrossing, and I found myself wondering what system component I’d be introduced to next, and how it would be represented.

The game actually looks really good, overall, though the lighting can be a bit bright. The whole game is universally lit, and it would have been nice to play in the dark a bit more—especially since the AV ship you pilot carries a flashlight you’ll never need. Textures are crisp, and colors are vibrant and saturated. You’ll quickly learn to look for the vivid purples and lurid greens that signify viral programs, which is really helpful, as the environments can be somewhat busy. A particularly nice touch is that the weapons your ship wields are represented by brightly colored transparent outlines. It’s a decidedly high-tech look, like something ripped right out of a VR program.[singlepic id=10458 w=320 h=240 float=right]

Unfortunately, however, the guns don’t sound quite as spectacular as they look. When fired, your weapons make decidedly weak pew pew noises, which is really disappointing. The exception is the Thrasher, a massive gatling gun which has a nice meaty roar. Music is a bit of a letdown as well. It isn’t offensive, but it stays remarkably sedate over the course of the game. A more frenetic battle music would have helped keep the tempo up.

Given the weapon’s weak audio perhaps it’s not such a surprise that they feel a bit underpowered. You’ll find yourself emptying clip after clip into your enemies before they go down. The exception is, like with the audio, the Thrasher. A level perk turns the thrasher into a pair of ferociously satisfying machine guns that spray death all over the screen. The wide spray of bullets means your accuracy will suffer, but the combat in Retrovirus takes place at nearly point-blank range so it won’t be all that problematic.

[singlepic id=10459 w=320 h=240 float=left]Part of the reason the weapons feel so weak is that they run out of ammunition very quickly. Ammo in Retrovirus takes the form of “cycles,” which are used to power weapons, boosters, and a cloaking system. Weapons will drain your cycles very quickly—most weapons have no fewer than 10 shots, so you’ll find yourself “reloading” really often. Worse, by tying all of your abilities to one resource, you’ll find you’re out of ammo with no escape, since you can’t boost away or hide with your cloak. You can use perks to increase the rate at which cycles regenerate, but it still feels like your ship is extremely outmatched by the massive worm you’re tasked with destroying.

Fortunately, the controls on your ship are very tight so while you won’t be able to fire, flee, or hide, you will be able to dodge. You can move in the X- and Y- axes with standard WASD controls you’d expect from any FPS, but you’ll also be able to use the Shift and Spacebar keys to adjust your altitude. In some places you’ll even be able to roll your ship, which can change your perspective in really interesting ways. This freedom is standard of a 6-axis shooter, but it comes at a cost: you might find yourself a bit disoriented. I could see this giving people predisposed to motion sickness a rough time.[singlepic id=10463 w=320 h=240 float=right]

The single player campaign will run you a decent 8 or 9 hours, on normal difficulty, and it’s fairly engrossing. The story generally progresses forwards at a smooth pace, though there is a section in the middle that requires a grievous amount of backtracking, and there is a race level that is comes out of nowhere and is punishingly difficult. It’s like Cadenza combined those crushingly hard surfing levels in TMNT: Turtles in Time with the end of Star Fox 64, only they removed all the fun. It took me nearly an hour of grinding before I managed to pass this level, and it nearly resulted in me breaking my controller. The rest of the game is well paced, until the very end. The final battle with the worm you’ve been chasing is a real disappointment, but it could have been forgiven if the developers hadn’t decided to add an epilogue, 90 minutes of brutally challenging fighting capped by a truly dreadful boss fight. The whole thing just screams anti-climax.

[singlepic id=10461 w=320 h=240 float=left]Multiplayer content is fairly limited. There are big maps with space for up to 32 players, but I never found a game with more than 5 or 6. The multiplayer gameplay isn’t really that great anyways—it removes the best parts of the game—the varied new environments and the story, but doesn’t really offer anything to make up for it. The gameplay isn’t fast or frenetic enough to keep your pulse up like the best online shooters will.

I know this review seems fairly negative, so I want to stress that this game is actually a lot of fun. The proficient graphics, distinctive environments, and interesting story keep you playing in spite of the frustrating difficulty spikes and lack of polish. It’s a brave move to try and recreate a long-dead genre like Cadenza has done, and they’ve wound up with a solid game. Retrovirus isn’t a game you’ll be talking about in a year, but if you ever enjoyed a Descent game, you’ll probably be glad you gave it a shot.