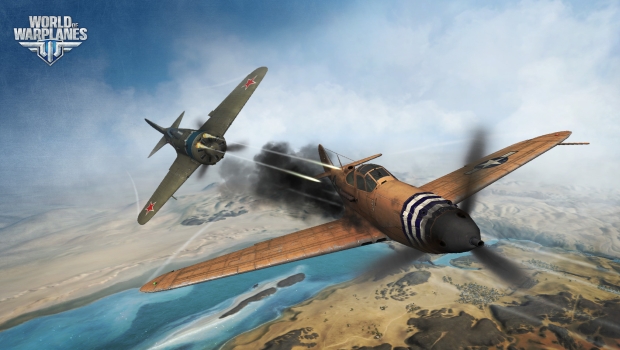 Last Fall Wargaming.net introduced us to their next planned “World-of” MMO with an invite to their closed Beta testing. After nearly 6 months of massive improvements, we jumped back into the beta to see how improvements were coming along, and if some of the critical bugs were resolved. We were not disappointed.  Let’s check in with Wargaming.net on World of Warplanes.

The mechanics of the plane presets have changed quite a bit from our prior preview. Very different than the tech tree system in World of Tanks, the game allows to install equipment on your individual plane via earned experience points.  As your level grows, so does your opportunity to tackle a vastly-increased number of unlockable aircraft including several variants of the most popular fighters of the period.  The upgrade panels may be a bit confusing initially to hardcore World of Tank players, but after adjustment it works very well.  Similar to World of Tanks, within the upgrade panel you still have the ability to go back and chose different development branches, should you find that you’ve chosen poorly for your play style.

[singlepic id=8544 w=320 h=240 float=left]There is one area that impressed us quite a bit this time around, and is easily the largest improvement – the flight mechanics.  More responsive controls allow for better maneuverability and a better overall feel to flight, whether you are using a flight stick or a mouse and keyboard.  There is also support for a gamepad if that’s your style.  The controls and flight mechanics aside, the game also got a bit of a population boost this time around.

With a 15 minute time limit on battles, the action is thankfully fast and furious from the start.  With more players in the Beta gone are the 6 or less player battles replaced by as many as 10 or more on each side.  Having more numbers in the game makes a huge difference in the experience, giving players a more challenging experience overall.  It is not uncommon to have three or four planes circling and maneuvering for position on a single fighter while simultaneously trying to defend their own side.  It means a greater variety in ground targets, allowing players to split time between dogfighting and taking out tactical objectives.  Outside of the bug fixes we saw from the previous preview to now, this is one of the larger improvements to gameplay – having more people to shoot.  Managing to do this while all but eliminating the queuing process is a testament to how far the Beta has progressed.

Wargaming.net did not sit back and simply let more players in though, they also stepped up in a big way in the graphical department.  Similar to the improvements tank drivers saw in World of Tanks, the realistic portrayal of the plane squadrons and all of the great backdrops and environments saw a sharp uptick in quality.[singlepic id=8546 w=320 h=240 float=right]

While the game is still being balanced, and new fighters are being introduced, I found the earlier aircraft to be the most enjoyable to play.  Later fighters seem to lack the romantic dogfight appeal that you see in movies or read about in history.  There is a just something about seeing early World War II planes chasing one another across the sky, bullets flying, smoke trails streaming as they pitch, roll, and dive trying to outmaneuver one another for the kill.  The later aircraft are not nearly as forgiving, and rarely do you get a chance at a prolonged dogfight, but then again I’m not quite an experienced fighter ace…yet!

Though the game is still in pre-release Beta, the flight mechanics, graphics, and engine improvements have made it nearly ready for prime time.  From what we’ve seen, the game should be a wonderful experience for the aircraft enthusiast and those just looking for a casual and fun time.  While we wait for the official release announcing when we can expect the skies to be filled with hundreds of other rookies, we will continue to cover the Beta.  Based on this preview, you have plenty to be excited about – it’s almost time to pursue our attempt to become an Ace of legends…even if it’s only in our own minds.