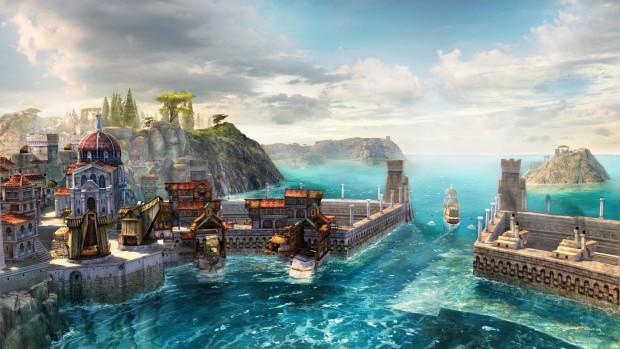 The free-to-play browser industry has grown quite exponentially over the last couple of years and it has seen it’s fair share of city building and farm building MMOGs that all seem to share the same premise in the end. But, Innogames brought with them this year to E3 their new pirate-based browser based MMOG Kartuga which seems like it will be raising the standard of quality for browser based games.

Kartuga is set in a stylized and vibrant world which players will be able to take on the role of one of three different ship classes: the Destroyer, the Protector, and the Engineer. Each of these classes of ships will each bring something different to the table skill and play style-wise, and it will be up to the players to team up in 4v4 cooperative PVP matches where only the strongest team will prevail. Currently they have announced two different PVP modes: Domination, which is a fast-paced variant of king-of-the-hill, and destruction, a mode that involves detonating a bomb in the enemies base.

Throughout the game players will be able to combine PVP missions and PVE quests to gather loot, improve their gear, and to acquire better crew members to give them the extra edge in battle. On top of this, earning experience unlocks different skills, ships, and items for the player to customize their ships even further. From the little time I had with the game I was able to see some of the beautiful environments that I feel set this game apart from other browser based games as well as has nice fluid controls and plenty of customization to make the game a fit for everyone.