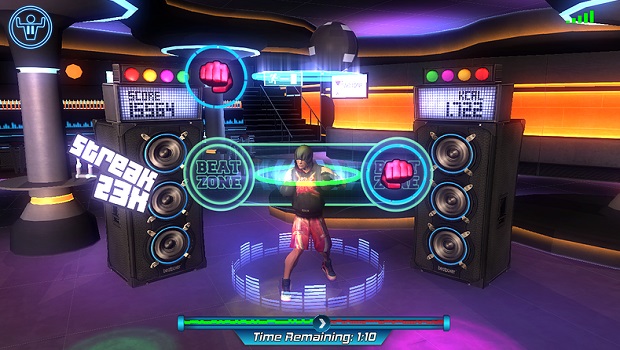 Motion control sometimes gets pushed into games where it doesn’t belong, but if there’s one place that gaming without a controller has been a success, it’s the dance/fitness genre. We’ve had WiiFit on the Wii, Dance Central on the Xbox 360, Sports Champions on the PS3, and a dozen other exclusive and cross-platform titles that proved motion control can be great for getting people off the couch. Each console now lays claim to a respectable selection of fitness titles, but for better or worse PC gamers have been largely left out of the loop. Until now, that is; nearly seven years after the launch of Wii Sports, Windows platforms will see their first motion controlled fitness game.

[singlepic id=15801 w=320 h=240 float=left]BeatBoxer+ is, as the name suggests, a rhythm-based boxing game. Like a mix between Just Dance and Real Boxing, the game will require players to jab and cross in timing with the music. Like other fitness titles, BeatBoxer+ offers preset workout routines along with the ability to create individual profiles and goals. The game relies on the Extreme Motion SDK for its motion controls, which means that movement is tracked via your webcam.

Because of this, I wasn’t exactly sure what to expect when firing it up. I had some doubts about how accurately my laptop’s webcam could track 3D motion. Hardware specifically designed for motion control, like the Wiimote, have issues with accuracy; surely something designed for another purpose entirely would be even worse, right?

Surprisingly, no. With only a quick calibration pose (hands up, elbows bent), you’re into the game. After creating your profile, a mandatory “basic training” tutorial introduces you to the building blocks of the game. There are three basic moves: jabs, hooks, and uppercuts. As in other rhythm titles like Guitar Hero and Dance Dance Revolution, you perform each move in time with the music when it reaches the “beat zone”. As throwing a punch takes more time than a simple step or button press, the timing does take a bit of getting used to.

Once you get the hang of it though, the gameplay is pretty fun. There are three game modes available to you after the tutorial. Endurance is moderate intensity throughout, Hill Climb gradually increases from low to high intensity, and Interval alternates between high and low. The library of 15 songs is relatively small for the genre, but decent for the price and probably likely to be expanded. Although I didn’t recognize many of the artists, the high energy dance songs are great for boxing along to.

[singlepic id=15797 w=320 h=240 float=left]After a playing a few rounds, I have to admit that the tracking isn’t perfect; I earned quite a few “misses” despite being pretty confident in my timing. But considering that I’ve faced the same issues with similar titles on consoles, I’d say BeatBoxer+’s accuracy is pretty impressive for something that uses no extra hardware. Developer Indie Hero’s chief designer Samuel Smith is optimistic about the title and motion gaming on PC in general, saying, “We believe we’re on the forefront of a huge trend in motion gaming where users interact in games without touching anything.”

BeatBoxer+ is currently available from the game’s website here for an “early adopter” price of $4.99. It also launched today on Desura, and will be coming to Steam, Amazon, and other major PC game retailers at some point in the future. Check out the screenshots below for a closer look at the game.