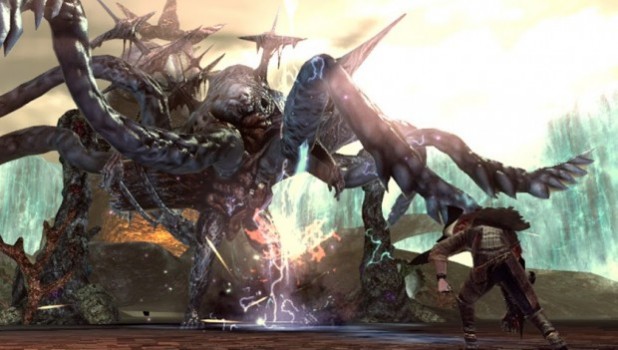 I’m going to come right out and say it — less than an hour in Soul Sacrifice, I wanted to throw in the towel.

I’ve never been able to wrap my brain around games like Monster Hunter — I don’t exactly have the patience to sift through layers upon layers of obtuse mechanics that are never truly explained within the context of the game. It takes a certain kind of person to wade through all of that to reach the layer of fun that lies at its core, and that person isn’t me. There are, however, an entire legion of dedicated fans that love these types of games, and Sony — after losing Monster Hunter to Nintendo — have brought on Mega Man co-creator Keiji Inafune to try and recapture the same magic. After spending a few hours with the title, I say with some trepidation that, while I’m starting to understand Soul Sacrifice’s brand of insantity, I’m still a bit uncertain about how I feel about where this game is going.

[singlepic id=11633 w=320 h=240 float=left]Right from the moment I hit the start button, Soul Sacrifice aims to wedge itself right into that niche. Without any pretext or backstory, the camera zooms down to a horrific landscape, covered in mounds of skulls, blood, and bones. You are an unnamed prisoner in this land, stuck inside of a cage fashioned from winding femurs and craniums. An evil sorcerer covered in eyeballs explodes a screaming prisoner into a fine red mist, and through a rather exuberant display of violence, you end up coming into contact with a book made out of human skin — complete with giant eye and fangs. It’s all very, for lack of a better word, grody. Monsters look outlandish and disturbing, with body parts in places body parts shouldn’t be, dripping goop and other nightmare fuel.

The basic conceit is that this talking book holds the key to escaping — to not only finding out the secrets of its owner, as well as the evil eyeball guy Magusar, but also to gaining the power required to escape. In an interesting twist, this book serves as your hub to everything in the game. It’s where you customize and outfit your avatar, where you can read about all the lore of this dark, disgusting world and its monstrous inhabitants, as well as where you access each of the individual levels.

[singlepic id=11634 w=320 h=240 float=right]The Monster Hunter similarities truly become apparent when you finally get into combat. You can equip up to six different items that, when “sacrificed,” allows you to harness the magical abilities inside of it. This can do one of several different things, such as turning your arm into a giant fist or sword, increase various attributes, or even heal. Each weapon, like Monster Hunter, has a different feel behind them — some weapons require huge wind-ups, but deal massive damage, while others are super quick, dealing smaller amounts of damage in rapid succession. Each item you sacrifice can only be used a few times before they’re gone for good, so you’ll have to keep an eye on how often you use your abilities.

This, however, is where most of the similarities end. Rather than having a village to go back to, or wide open expanses to explore, you’re confined to rather small (in comparison) arenas, teleporting back out to the book after you complete your objective. While some might miss the ability to explore the vast reaches of these worlds, Soul Sacrifice is more focused on moment-to-moment battling, offering bite-sized, mission-based gameplay.

The strangest idea lies in how you grow your character. You don’t gain experience in the typical sense — rather, after defeating an enemy you are granted the choice of whether you want to save the monster, or sacrifice it. See, each monster you fight is actually a person or animal that has become corrupted, and according to the sorcerer’s order, monsters must be sacrificed. You, however, are given a choice. Choosing to sacrifice them will increase your attack power, while saving them will increase your health and defense. You can even decide to save your AI or human allies when they die, or sacrifice them. Sending them to an early demise unleashes a huge blast, but kills the ally in the process. Plus, certain missions and sections of the story will branch off depending on whether you decide to save or sacrifice certain enemies. Whether this has any lasting effect on the story remains to be seen, but it’s still a neat idea.

[singlepic id=11635 w=320 h=240 float=left]Everything in Soul Sacrifice revolves around risk/reward ideologies, and nothing makes this more apparent than the finite resource of lacrima. The only way to get it is by collecting the tears from the talking book (like I said, grody), and its use becomes increasingly more important the further you progress. When your items break after using them too much, you can spend lacrima to repair them. Lacrima can also be used to resurrect fallen allies. You also have access to Black Marks — super abilities that cause huge amounts of damage, but also cause horrible permanent side effects that lasts until you spend an ever-increasing amount of lacrima to break the curse. It’s not terribly hard to come by, but its limited nature means using it only as a last resort.

I’m glad I stuck around past the opening hour of the game. Soul Sacrifice gives out no favors, and wears its difficulty and its grotesque horror theme on its sleeve. But once I warmed up to its eccentricities (it’s really not as complex or weird as it pretends to be), I’ve been able to dive into it at full speed. The first few hours have been an interesting experience, but I’m unsure of how appealing it will be five, ten, or twenty hours from now. So far I’ve only encountered two types of missions — defeat X number of enemies or defeat the boss — and I’m unsure if there’s anything else other than these types. Unless some new wrinkle is introduced sometime soon, I don’t know how long it can keep up this momentum.

Be sure to check back here for the full review at Midnight on April 30th, and find out whether this monster hunt is worth joining.