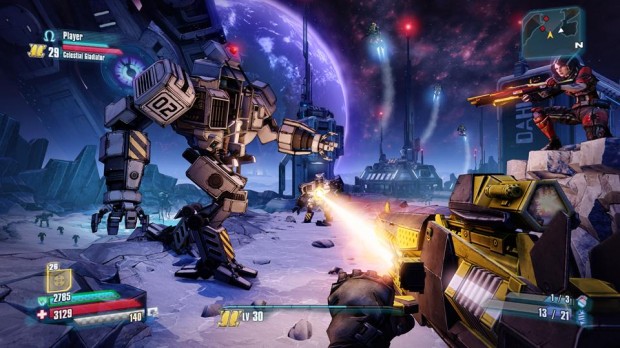 It is time for yet another Borderlands game as 2K was prominently showing off Borderlands: The Pre-Sequel at PAX East. Located within a large, mildly creepy dome, a select group of on-lookers were presented with a demo, hilariously talked over by Mikey Neumann (Creative Director at 2K). In the demo, we got to see some of the new additions to the franchise as well as an overview of what the story will be in this forthcoming silly adventure. One of the larger changes from past Borderlands is that 2K Australia will be having a hand in the development process. These Australian chaps have had a hand on every Bioshock games development, so their track record is impressive to say the least.

Another large change comes in the form of the environment. By that, I mean you are now on the damn moon. As you could expect, with this comes a variety of changes such as gravity being altered. When you jump, you now have an extra few seconds in the air, as well as an opportunity to double jump. Another perk of low gravity is being able to slam back to the ground, which is so elegantly called a “butt stomp” in Borderlands: The Pre-Sequel. Unfortunately, Neumann did not go into the details of how this is possible, due to a lack of gravity and such, but as I am sure we can all agree, a butt stomp skill is a wonderful feature to have. In typical Borderlands fashion, as you level up you get the chance to make your butt stomp even more butt stompier.

On the moon, oxygen is a very valuable asset. Your main character has an oxygen meter located in the bottom right corner that depletes constantly when roaming about the moon. You do find items that replenish your oxygen, which makes scavenging for materials even more important. While having an oxygen meter is something that logically makes sense, it’s hard not to imagine it eventually proving to be some kind of annoyance. Then again, watching an enemy explode into the air and hilariously float into nothingness may make that trade-off fair.

A key part of every Borderlands game is what character you play as, even though the overarching story has never been too impressive. The character set in Borderlands: The Pre-Sequel holds more than a few familiar faces as it consists of Athena (General Knoxx DLC), Wilhelm (Borderlands 2), Nisha (sheriff from Borderlands 2), and one that everyone knows, Claptrap. Sadly, we only saw Claptrap for around five seconds during the demo given as the main two we saw were Wilhelm and Athena. The story will tell the backstory of Wilhelm and how he turned into the boss you face in Borderlands 2. Interestingly enough, you are also working for Handsome Jack. Because of this, you will see his rise to where you see him in previous games.

The biggest bullet point of the first Borderlands was its ungodly amount of weapons you had at your disposal. That number will only increase as 2K Australia came in and added an ice gun weapon type to the mix. According to Neumann, Gearbox had been wanting to add an ice gun to the game since the first Borderlands, but could never figure out how to integrate it properly. Then when they gave the idea to 2K Australia, they figured it out within an hour. Also available will be “lots of lasers” and a power that lets you reflect ammo being fired at you, though if that is an Athena-specific ability is a bit unclear.