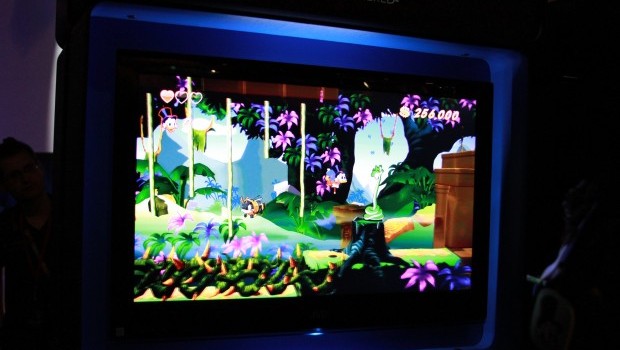 Got that theme song stuck in your head yet? No? Well, the classic 1989 NES game DuckTales has been polished up and will be coming out later this summer for WiiU, PS3 and Xbox 360. At E3 we got a chance to sit down and bounce our way through a couple of levels with Scrooge McDuck on his way to increase his cash reserves and uncover secrets lost to a console from several generations ago. Head past the break for more info and upcoming release dates.

First and foremost, this is a remake and not a reimagining, though there are additional areas. The level design, controls and pacing all scream 1980’s, and if this wasn’t a game you liked back then, it just might your cup of tea. While the life system is very forgiving, there is a fair amount of trial and error. One of the big things I found I needed to get used to was the cane-swing mechanic, though the pogo jump was easier to re-learn. It’s almost too simple in control though, falling somewhere between tablet/phone gaming and true console controls, and were it a brand new release with no history we might be leaning on the lack of modern controls and a shallow gameplay design.

On the flipside, this game is very, very good at what it gets right. The animation and effects are astounding – so much so that you just might forget that the original release is 24 years old – heck, it’s almost old enough to rent a car without age-penalties. Not that Scrooge would ever rent a car — no, that would dig into his vast fortune. Regardless, the visuals are superb, and the’ve not just gotten rid of the jaggies and 8 bit palette. They clearly poured love into the recipe – details are fantastic in almost every aspect of fore-and-background, from hinged windows blowing in the wind to details on rail-car bridges. They really took their time to polish this gem.

As to the release date, Capcom has announced that DuckTales: Remastered will come to North America via digital download on August 13 (on PSN, Nintendo eShop on Wii U and PC), with an XBLA version launching September 11.  PlayStation 3 owners can also pick it up at retail on August 20th with a download code and a collectors pin. Cost, you say? $14.99 for the digital version and $19.99 for the retail version on PS3.

The main reason I’m excited to see DuckTales make a re-appearance is the chance that lovable Disney characters have a chance to become relevant again – seeing Gyro and Launchpad, the nephews and even the Beagle Boys tugs at nostalgia with me. I’m undecided as to whether I’d shell out for this blast from the past for myself – but having an eight year-old son who thinks Angry Birds is cool sure could use some perspective and I can almost guarantee Ducktales: Remastered will be in my library.