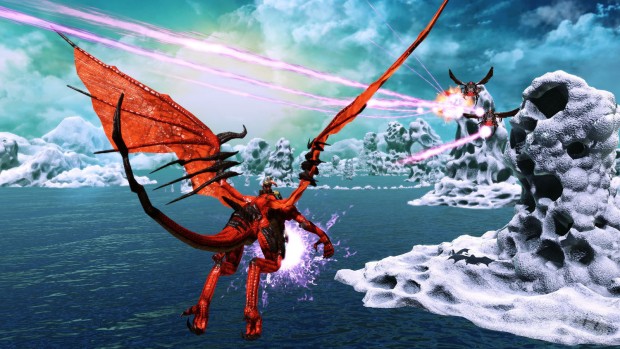 Crimson Dragon  is an on-rails shooter from the team that made Panzer Dragoon Orta  for the Xbox. From what I recall playing Orta on the Xbox years ago, Crimson Dragon  is very much the same style of game. Your dragon flies in a set direction and pace, and as a player you only control the up, down, left and right movements – but you are always moving forward. You’ll also control the aiming reticule and forms of attack.

In the short level I played of the game, I fought against a variety of enemies but the most impressive one was the boss at the end of the level. This boss battle wasn’t particularly challenging, but it was fun to see such a gigantic creature in a frenzy on the screen. The two attacks at my disposal were a targeted attack which allowed me to target vulnerable points on any given enemy until I had reached my arbitrary target limit and proceeded to launch a barrage of missle-like attacks. The other was an electric beam (well, it was blue and jagged so I’ll assume it was electricity) that acted as a constant stream attack so long as the huge reticule was over the enemy and the attack button was held down.

I like the visual style of Crimson Dragon , the graphics are eye-popping and filled with interesting and colorful set-pieces. Indeed, while the gameplay itself is quite limited, the scenery is varied and will go a long way to keep the experiencefresh, at least judging from the level I played through.

Crimson Dragon  will be coming exclusively as a downloadable title on the Xbox One.