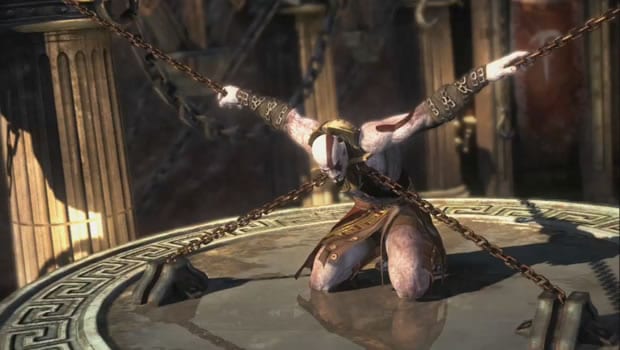 Up until now all of the God of War Ascension coverage has been multiplayer, multiplayer, multiplayer. Today that all changed when we got our hands on the first 30 minutes of the single player experience (see also the video below). Before we got started, director Todd Papy gave us a look at what has changed since our last outing with Kratos.

With over two years of development, the game aimed to make a similar leap in technology that we saw from God of War II to God of War III. The team wanted to overhaul many of the systems that make up the mechanics of the game while still retaining the feel of God of War. Since Kratos will be younger, the art style would have to be adjusted. They went at that task by looking at how they wanted the game to feel instead of just how they wanted it to look. Given how vast an upgrade II to III was, they have big shoes to fill.

Beyond the look and feel of the artwork, the combat would get a complete revamp. Since this game takes place roughly 6 months after the murder of his family, Kratos has already made his transition to the Ghost of Sparta. This means that the powers he has earned over the last few games can’t be present for this title. This left the team to focus more on the Blades of Chaos and what they are calling “World Weapons”. The Blades of Chaos will upgrade and become more powerful like it had in previous titles, but a revamped Rage meter makes for a different experience. Previous titles had players hoarding their Rage and you could unleash it with a button press roughly every 20 or 30 fights. Since you never knew when you’d need it, many players (including myself) never really used it. The team decided that Rage needed to be a part of normal combat, so roughly every 20 kills you’ll max out your Rage meter, and it unleashes automatically. This means Kratos will begin doing additional damage, will expand his combination repertoire, and otherwise raise his lethality automatically.

Kratos has always been able to hook enemies, but now you can tether them and continue to fight with the other blade. This gives him an element of crowd control, as well as the ability to grab, swing, and use enemies as a wrecking ball.

There are five World Weapons that have been revealed for the game – the club (which was present in the Multiplayer Open Beta), the sword, a shield, chains, and a sling. Rather than replacing your blades in combat, the World Weapons augment your attacks. Using the circle button allows you to attack with the weapon, and you can mix it in with your blade attacks, unlocking entirely new combinations. The weapons all have unique finisher weapons when they are discarded, so items like the spear finish up with raining pila from the sky to crush small enemies. The sword can be thrown directly into the chest of an enemy to stun them for an instant finish.

The animation system has also gotten an overhaul. This new layered animation system gives players new movement and attack options. It also allows animations inside of other animations. The example we saw was an cyclops that was walking past a sexy statue that could now twist his head, give it googly eye, and then continue walking forward. Probably not a serious example, but it illustrated the point well. The gameplay example I saw was when I encountered new climbing surfaces. Rather than the obvious grid of climbable space I saw a large area with multiple paths that allowed me to scale up to a nearby pipe. Additionally, Kratos can now slide down walls, giving players a new gameplay element.

God of War: Ascension is a prequel to the original God of War and it tells the story of how Kratos became the Ghost of Sparta. The game begins with the pale warrior locked in chains because he has incited the wrath of the Furies. Having broken his blood oath to Ares, the Furies have decided to exact their revenge. The first to break such an oath was the giant Aegnon the Hecatonkheires – a multi-handed monster over 10 times larger than anything in any of the previous games. Megera, a one-armed female Fury with four monstrous spider-like arms seeks to actively torture you, but instead accidentally frees you from your bondage. Kratos, slighted, now seeks to end her life, pursuing her through the dead shell of Aegnon. Cornered and near defeat, Megera unleashes vile creatures from her bosom (literally) and they crawl inside the skin of the dead giant, reanimating him. The many-handed beast begins to re-animate one piece at a time unleashing an insectoid creature with many bladed arms. Battling this creature had us running across the arms of the huge beast as it tried to crush our diminutive form at every turn. With the defeat of the beast our demo ended and I realized something – 30 minutes had passed, and I couldn’t wait to see what happens next.

This title looks to show us a more human side of Kratos instead of the man who would murder the Gods. Obviously we know how the story ends, but it is exciting to see how it began. The game is releasing exclusively on PlayStation 3 on March 12th, and even with it being just around the corner I can’t wait – this looks like the best God of War yet!